Obscurity of the Day: You Know How It Is 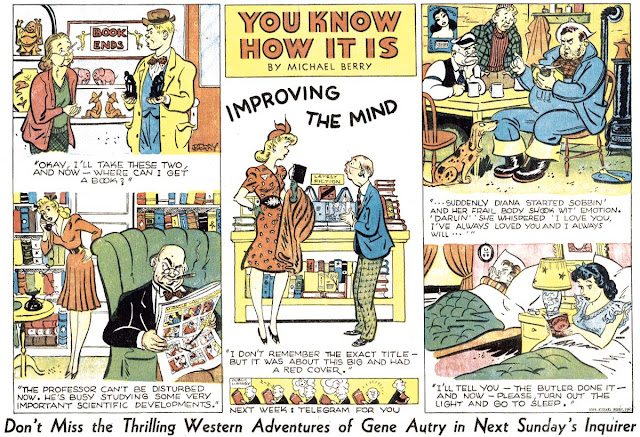 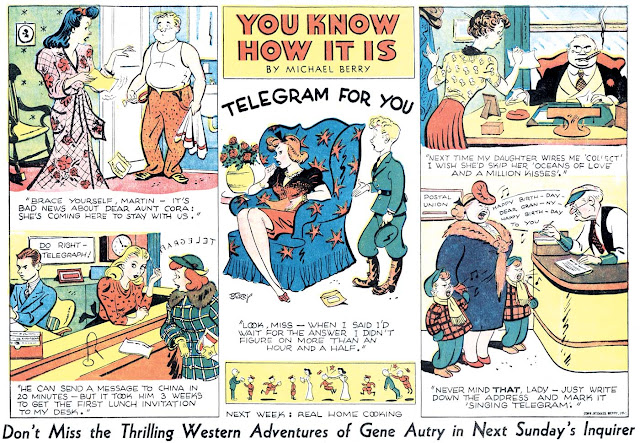 Michael Berry eventually settled into a career of drawing cheesecake cartoons for some major publications, but the earliest comic strip work I know of by him is this Sunday newspaper cartoon series, You Know How It Is. I have only ever seen it running in the Philadelphia Inquirer, but my guess is that he was trying to self-syndicate based on each installment bearing his own copyright. Trying to self-syndicate a color Sunday feature is an extremely bold move for anyone, let alone a young cartoonist. Why he felt that this sort of series, a collection of gag cartoons on a common subject, would be worth all the trouble and work of self-syndication I cannot imagine. There were already very fine series available that offered the same thing -- Vignettes of Life, Family Portraits and Among Us Mortals being the most notable -- so it wasn't as if he'd come up with anything terribly original.

The series ran in the Philadelphia Inquirer from December 15 1940 to April 20 1941, so it was a very short-lived experiment, assuming it is not found elsewhere running longer. Berry would try again later with a wacky daily strip titled Boogie Woogie, but once that also quickly tanked he took up magazine cartooning and found a ready and lucrative market for his wares.

Apparently little is known about Michael Berry's life, but you can read more about him and see samples of his other work at American Art Archives and on Ger Apeldoorn's blog. Alex Jay, however, has uncovered a full and interesting life story for the man, which we will see tomorrow on the blog.