Andrew Cleveland Hutchison Jr. was born on February 12, 1885, in Charlotte, North Carolina according to his World War II draft card which had his full name. (The family name was frequently misspelled Hutchinson, with a second “N“.) The same birth date was on Hutchison’s Social Security application. A North Carolina marriage record said his parents married on October 9, 1883 in Mecklenburg County, North Carolina. Hutchison’s mother was Annie R. Fisher.

At age thirteen Hutchison showed promise as an artist as reported by the Charlotte Observer (North Carolina), December 25, 1898.


Master Andrew C. Hutchison has finished a beautiful pen and ink sketch, “The Servant,” which Van Ness framed yesterday. The work was done under the direction of Miss Sidenburg, art teacher at Elizabeth College, and, as all of Master Hutchison’s work, shows genius. His parents will send him north in a year or so to have his talent developed.


It’s not known where Hutchison went for additional training.

The 1900 U.S. Federal Census listed Hutchison, his parents, three siblings and a servant in Charlotte at 709 West Trade Street. Hutchison’s father was a merchant.

Hutchison was a freshman at the University of North Carolina. He contributed many drawing to the school’s yearbook, Yackety Yack, in 1906 (below 6 from 20 pieces) and 1907 (complete yearbook is here). He signed his work either Hutchison or Hutch. 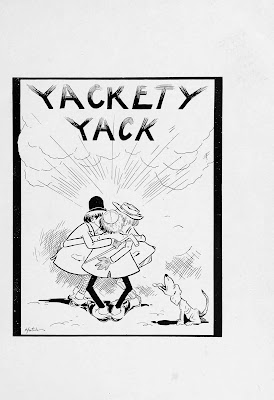 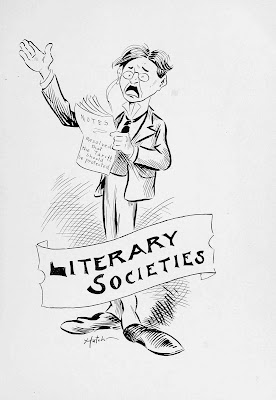 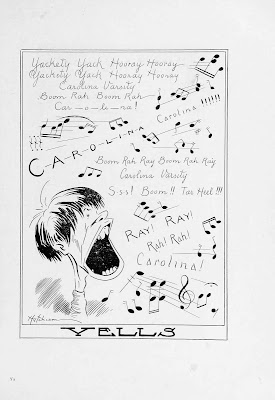 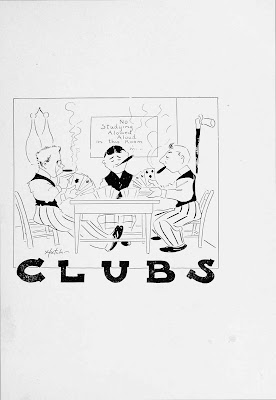 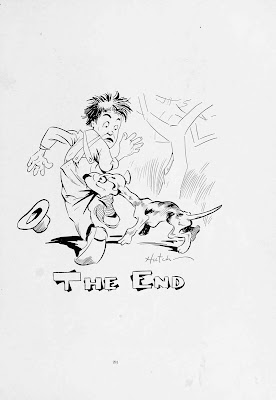 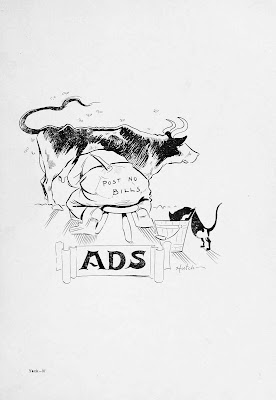 In 1907 Hutchison was a staff artist on the Charlotte News. The Gold Leaf (Henderson, North Carolina), September 5, 1907, reprinted the News article on him.


Young North Carolina Artist Honored
It is gratifying to note the rising success of the Charlotte News’ talented young cartoonist, Mr. Andrew Hutchison, Jt., as indeed it is of all worthy North Carolina folks. We have watched with interest the very creditable work of this young man and predict a brilliant future for him. In the current number of the Review of Reviews is one of “Hutch’s” cartoons which is made the occasion of the following complimentary reference to him by the News:

The News is very proud of its cartoonist, Mr. Andrew Hutchison, Jr. It believes that for his experience he has not a superior in the country.

In the September issue of the Review of Reviews one of Mr. Hutchison’s cartoons on the railroad rate discrimination question, which appeared in the News some time ago, was copied alongside of cartoons from Davenport and the world’s leading cartoonists. This is a distinct honor and one that any cartoonist would justly prize, for the work reproduced each month in this magazine represents the choicest products of the world’s artists.

Mr. Hutchison began his career with the News and since he has been associated with this paper his work has been widely praised and many times copied.

We believe there is not an artist of his age in the United Staes with brighter prospects for a splendid career.

Cartoonist Hutchison and his father’s surname were misspelled in the Charlotte city directories for 1909 and 1910. Their home address was 711 West Trade which was also recorded in the 1910 census. Hutchison was a self-employed cartoonist.

The Observer, November 18, 1933, had a column, “Looking Backward”, which reprinted items from ten and twenty years ago including this from 1913, “Mrs. A.C. Hutchison is spending some time in New York visiting her son, Andrew Hutchison.”


“Hutch” Making Good as Cartoonist for Leading Periodicals
Mr. Andrew Hutchison of New York city is spending the week in the city with his mother, Mrs. A. C. Hutchison, at her home on West Trade street. Mr. Hutchison is widely known as “Hutch,” under which signature he was formerly cartoonist for The News. He has been in New York for three or four years and has made good in a hurry as cartoonist for many of the leading papers and periodicals of the American metropolis. He has contributed to The Evening World recently a serial list of cartoons and has also contributed comics to Life, Judge and Satire, besides a series of political cartoons for The Yonkers Daily News. He has already been engaged to do serial cartoons for the Hearst publications on his return to New York. Mr. Hutchison has attracted much favorable attention and the fact that he has contracted to do serial work for the Hearst publications is evidence of the rank he has attained in his chosen vocation. His first work as a cartoonist was done for The News.

At some point Hutchison moved from paper to celluloid as noted in the Observer, January 21, 1917.


Queen City Artist Prospers in New York
Andrew C. Hutchison, a well-known Charlotte young man, better known as “Hutch,” according to a metropolitan paper, devoted to amusements, has achieved remarkable distinction in that city during the past few months, his cartoon work with the Keene Cartoon Corporation, for various moving picture companies, being considered of unusual class. His work is now appearing in the Marcus Lowe circuit, advertising various animated pictures.

In Biographical Sketches of Cartoonists & Illustrators in the Swann Collection (2014) Sara Duke profiled “A. C. Hutchinson” and said “In 1923, he worked for the Lee-Bradford Corporation as an animator, where he worked on the series Red Head Comedies with such artists as Walter E. Stark, Frank Nankivell and Richard Friel.” She credited him for the Chicago Daily News comic strips but those were drawn by Frank Hutchinson.

According to the 1920 census, Hutchison was a Manhattan resident at 59 West 49th Street. He was a self-employed cartoonist working in the motion picture industry.

The bride us if a prominent New York family, a graduate of Cornell and a brilliant and charming young woman.

Mr. Hutchison is a son of the late Andrew. C. Hutchison and Mrs. Hutchison, and is a native of Charlotte. His father was a prominent citizen of Charlotte, with important manufacturing interests in this section.

Mr. Hutchison has been living north for some years. He is widely known as a cartoonist, featuring animated cartoons which are used in the moving picture business. His work has won him fame in New York. He is also a young man of bright parts and fine capabilities.

He and his bride will reside in New York, but hope to come to Charlotte in the fall.

Hutchison has not yet been found in the 1930 census.

The Internet Movie Database has six credits for “Andrew Hutchinson” from 1931 to 1945.

In 1940 Hutchison was divorced and living alone at the Hotel Jackson, 137–139 West 45th Street, in New York City. He worked for an advertising company.

The New York City death index, viewed at Ancestry.com, has an “Andrew Hutchinson”, age 72, who passed away March 1, 1957.

The Swann Collection of Caricature and Cartoon has several cartoons and strips by Hutchison including Knott Wright; Maw, Paw, and Willie; and Luke Whoozis.