Obscurity of the Day: Around the Studios 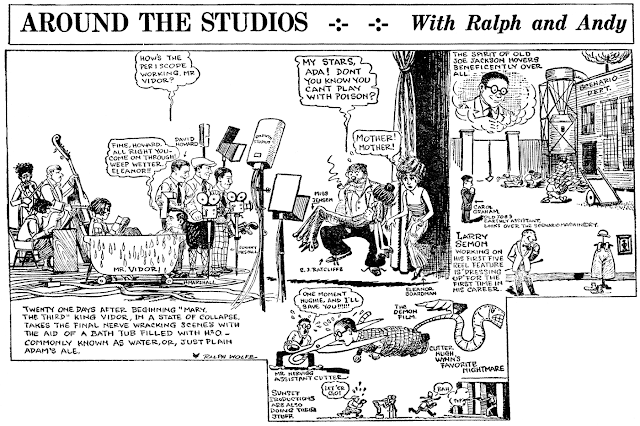 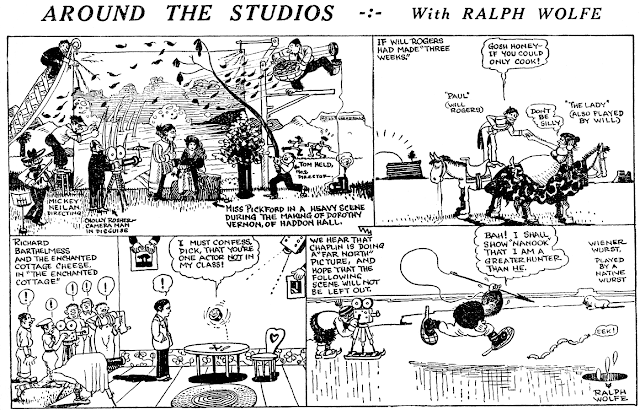 Cornelius Vanderbilt IV had a pasion for journalism, though it antagonized his rich and publicity-shy family. He wanted desperately to publish his own newspaper, and when he started the Los Angeles Illustrated Daily News in 1923 his parents disinherited him and he was shunned by the high society into which he was born.

Vanderbilt also managed to antagonize the newspaper business when he started his papers in LA, San Francisco and Miami -- competitors in those cities, led by Hearst, vowed to put him out of business. One way they hobbled him was to block access to a wire service, and tie up all the major syndicates in these cities so that material was unavailable.

Vanderbilt, who was the newspaper business's Don Quixote, vowed to overcome all these hurdles. When it came to cartoon features, he brought a small cadre of cartoonists in-house and told them to fill his papers with drawings.

One of the better cartoonists to get on board was Ralph Wolfe. He was definitely the star of Vanderbilt's LA Daily News during its short life, producing lots of spot illustrations, a daily comic strip and today's obscurity, Around The Studios. This weekly feature appeared in the Sunday edition on a page devoted to movies, and offered up fannish humor about the pictures currently being shot.

I can only say for certian that Around The Studios was running in April 1924, the only month of the Daily News I've seen, but it may have run for the whole short life of the newspaper under Vanderbilt's leadership (September 1923 - about the end of 1924*).

As far as I know the only microfilm available of the newspaper is in the Los Angeles Public Library, and if you are in the vicinity it would make for some very interesting perusing. Anyone want to index it?


* The paper was sold and continued to be published under new management afterward.

Seems pretty doubtful. Ralph Wolfe was a real guy, as will be shown tomorrow in Alex Jay's Ink-Slinger Profile.