Obscurity of the Day: The Dumplings 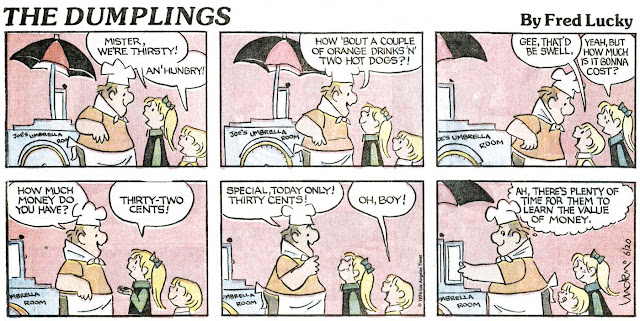 Fred Lucky is known mainly for his Hollywood work in animation and storyboarding, but  he also sold a couple newspaper comic strip series, none of which became long-term successes.

The premise is that the Dumplings are a young married couple, very much in love, and the hook is that they're seriously overweight. Lucky did a wonderful job of making the Dumplings adorably romantic with each other and projecting a positive image of people who are comfortable with themselves just as they are. In the 1970s, the Thin Is In Decade, it was actually pretty groundbreaking stuff to tell people it was okay to be fat and that you don't have to look good in skintight disco wear to find love.

Strangely, although the strip was picked up by hardly any newspapers, it was reprinted in two paperback collections and got picked up for a half-hour TV sitcom by Norman Lear, the '70s hottest name in TV comedy. The TV show was cancelled after ten episodes, though (it has disappeared so completely I couldn't even find an episode or a promo on Youtube!). The comic strip hung around for more than a year after that, but appeared in hardly any papers outside of the LA Times itself.

PS --- Sorry about the quality of these samples. They are from the darkest days of the newspaper web press, when everything color in your paper was muddy, dirty and out of register. Yecch.

Comments:
Would you settle for hearing the theme song?

I couldn't help but notice that the pilot for the live-action "Dumplings" sitcom aired on October 4, 1975, just 5 days after the comic strip began (the regular broadcast began on the following January).

Which suggests that the idea got pitched to television before the comic even launched in papers. Has something like this happened before? The closest I can think of is that Aaron McGruder was shopping "Boondocks" around to television while he was developing it with the syndicate (although the show didn't air until after the strip ended).

This just showed up, an opening intro for the Norman Lear "Dumplings" show!