Obscurity of the Day: Muffy Shuffles 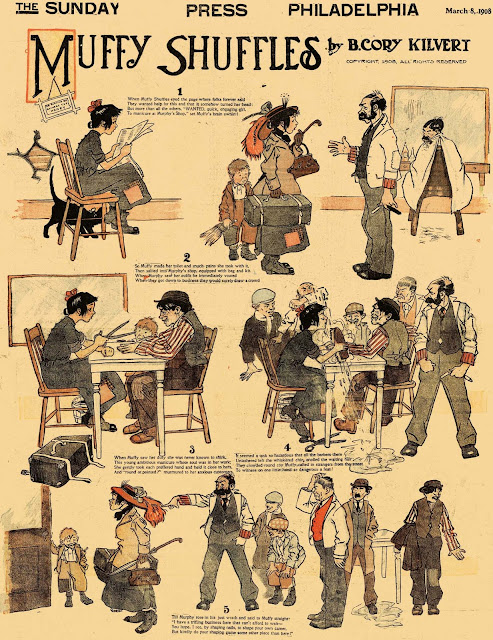 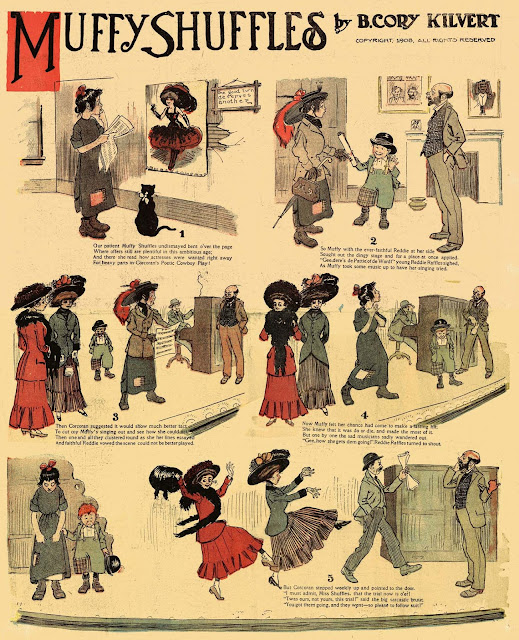 In 1907 there debuted a newspaper magazine cover series, one of the earliest on record, called Fluffy Ruffles. The series concerned a gorgeous young debutante who was looking for a job. The gag in each installment was that the girl would get a job, but was such a magnet for men that the boss would tire of the lovesick throngs hanging around the place of business and can the beauteous Miss Ruffles.

That series did well enough that it was turned into a book, which you can see online here.The popular series spawned a satire version, which is our subject today. The satire was titled Muffy Shuffles, it was written and drawn by B. Cory Kilvert, and it ran from March 8* to May 24 1908**. In it the star is changed from an opulently dressed Venus to a rag-wearing ghetto girl.

Now this might seem like a great jumping-off place for biting social satire, but Mr. Kilvert had no such ambitions. Instead he seemed to think that the girl's appearance alone was pretty much all the comedy needed. The situations she gets into are essentially the same except that the jobs she applies for are with the down-and-out employers of her neighborhood. They play out pretty much the same as in the original series except that the merely curious substitute for love-starved boys.

The series was sold to a goodly number of papers; I'd not be surprised if almost as many ran Muffy Shuffles as had taken Fluffy Ruffles.The question, though, is who syndicated it. Kilvert had done some work for the New York World earlier in the decade, and was just about to do some work for Hearst, but I've seen this series in neither of their flagship papers. I wonder if the Philadelphia Press was the syndicate, because they ran the series, or maybe it was distributed by World Color Printing, whose sections it tends to be found alongside.

In a promo announcing Muffy's arrival at the Washington(D.C.)Star,(12 March 1908) the cut is attended by the identia: (Copyright 1908 Associated Literary Press), which I've never heard of. I suppose that would mean that Muffy is more or less self-syndicated. The strip is sold like a any independent series, for instance the Sunday Star's comic section was a mix of McClure and Philadelphia Press, otherwise.
I also learned a nugget of information from the same promo; B. Cory Kilvert was the married name of Fanny Cory.

Is "Corcoran", the impressario, supposed to be Jewish? Or is "please to leave" merely contrived for better scansion?

Mark -- Great find there. Seems that Associated Literary Press was a McClure company according to my Googling. So that answers that.

On the other hand, the business about B. Cory Kilvert being the married name of Fanny Y. Cory (or Fanny B. Cory as they have it) seems to be utter balderdash. Both people are proved to be in existence (and of different sexes) based on marriage records and news stories.

Evidently the PR flack who wrote this was confused. The Corys -- B. Cory Kilvert, Fanny Y. Cory, and J. Campbell Cory were related, but they weren't occupying the same space of breathing the same air.

Hi Anonymous --
I wouldn't be surprised if Corcoran is supposed to be Jewish (the caricature is fairly typical stuff) but I think the phrasing is merely to serve the rhyme scheme.

I'm no expert in ghetto theatre, but certainly there is a tradition of Jewish owned (and even Yiddish language) theatres in the lower class areas of turn of the century New York.

In those days it was a controversy in New York that too many Jews owned the legitimate mainstream theatres. If you have any familiarity with the first version of LIFE magazine, when it was a cartoon and commentary weekly, for years before WWI, they had a longstanding, sometimes ugly campaign against Jewish influence in the Broadway playhouses.
If "Mr. Corcoran" seems to be a semetic cariciture, it's a rather mild one, certainly next to LIFE's, but it would seem intended, as stereotypes were always useful cartoonist shorthand, and in 1908 you might easily associate a theatre owner with being jewish.