Dorothy McClennan Stuart Hughes was born on November 25, 1897, in Boston, Massachusetts. Her birth information is from the Massachusetts Birth Records at Ancestry.com.

In the 1900 U.S. Federal Census, Hughes was the only child of Edward, a salesman, and Lucile. They resided on North Street in Randolph, Massachusetts.

At some point the family moved to New York City. The Brooklyn Daily Eagle, September 17, 1909, listed Hughes as a new member of the New Humane Club.

Hughes was a regular contributor to the Daily Eagle’s Junior Eagle section. The February 16, 1910 edition announced her as twenty-five credit puzzle winner. The March 4 Daily Eagle published Hughes’ letter asking if her sister could join the humane Club. Hughes was listed as a puzzle winner on March 30, April 13, and August 10.

Apparently Hughes’ first published drawing was in the August 16, 1910 Daily Eagle. The Daily Eagle would publish over 40 drawings by Hughes.

Hughes also sent artwork to St. Nicholas magazine which included her in its August 1910 issue.

Over two dozen drawings and paper doll outfits by Hughes would appear in the Junior Eagle in 1913. In the same year Hughes submitted art to St. Nicholas magazine which featured her Gold Badge award illustration, Through the Window, in January. The magazine listed her in its February, March, April, June, July, August and October issues. 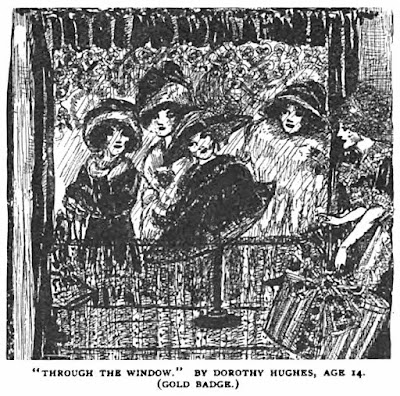 
… One boy and two girl contributors to the Junior Eagle celebrated their sixteenth birthday last year and their work no longer adorns the pages of our little paper, as credits are given only yo boys and girls under 16. I am sure you know who they are, for we miss the superior contributions from their pens—they are Dorothy Hughes, Harry Diehl and Florence Chadeayne.

I hope they will be occasional contributors, for we do not want to forget these talented little nieces and the nephew. …

The 1915 New York state census said the Hughes family lived at 1014 Park Place in Brooklyn. The household included a servant. 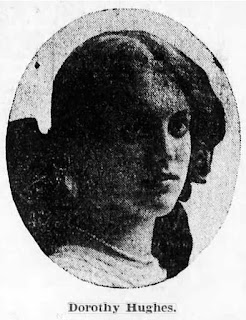 Dorothy Hughes, of 1014 Park place, whose contributions of drawings were a feature of The Junior Eagle only a few months ago, has taken the gold medal for artwork in Adelphi Art School. Dorothy is only 16 years old and until she entered the art school she never took a drawing lesson, and her only experience was gained through drawing pictures for the weekly edition for children of The Eagle.

Her drawings, when she contributed, were well executed, and even at that time the girl, then between the age of 13 and 15, was called an artist of real ability. Scarcely a week went by that one of Dorothy’s drawings did not appear in the paper and each seemed far better than the last.

When she became too old to send in contributions for the Junior Department, she matriculated in Adelphi Art School at the age of 16, and there, for the first time, was given actual instruction as to the way to draw. She grasped the mechanical part of drawing easily and soon showed such marked superiority over her classmates that her work was watched carefully by the teachers. For that reason she was awarded the prize and her victory in the competition was very popular.

The medal Dorothy received is the only medal of gold given for first-year classes, and it is prized the more because it brings with it the assurance that the competent critics of the pupils’ work saw in her a girl with ability and the power and desire to learn.


In charcoal drawing from the cast there are on the walls about 200 works on Whatman paper and the arrangement is such that all of the drawings are in good light. The prizes were as follows: To Dorothy Hughes, gold medal for full length nude, “Aphrodite” …


Readers of the Junior Eagle have not forgotten the exquisite drawings contributed by Dorothy Hughes which adorned the pages of the Junior and won for the little artist words of highest praise from older and competent judges. Great success in the field was predicted if Dorothy chose to adopt art as a profession. This she decided to do, and entered the Adelphi Art School, where her natural talent improved and won for her the distinction of the award of this year’s gold medal for antique drawing, the only gold medal given to the first year students.

Members of the Junior Eagle Art Club will learn of the success of its former member with pride and pleasure. Dorothy was always modest and retiring, but her work spoke for itself. Since entering Adelphi and having her drawings accepted professionally by several magazine, this talented girl has not forgotten the Junior Eagle, but has contributed, gratuitously, several beautiful drawings showing a steady improvement on her former work, for, like all ambitious persons, she was not content to rest on her laurels, but aimed to improve on all work she had done, even the best that she had done.

The Junior Eagle is proud to honor its gifted former Art Club member. We wish her continued success in her chosen profession, and the farm that will surely follow will have been richly deserved.


In 1916 St. Nicholas listed Hughes in January and published her art in March. 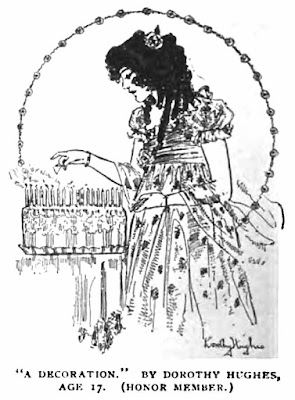 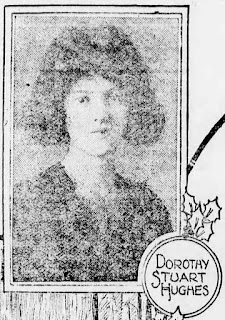 She took a one year’s course in the Life Room of the New York School of Applied Design for Women in New York City. From there she took up portrait painting under Joseph Boston at Carnegie Hall. Two summers were spent at Provincetown in the Art Colony studying landscape and oils under George Elmer Browne, and another year was spent at the New School for Life and Illustrations at Boston.

Miss Hughes has not aimed to do professional work while studying, but she has had drawings published in the Motion Picture Classic Magazine and in the M. P. Magazine. At the present time fashion designs and advertising work are occupying her attention.


FitzGerald’s Rubáiyát of Omar Khayyám: Popularity and Neglect (2013) lists Hughes’ 1919 and 1921 illustrations for the Omar Khayyám Club of America.

Before the 1920 census, Hughes’ father passed away. The 1920 census enumeration counted Hughes, her mother (the head of the household) and sister in Belmont, Massachusetts at 3 Oxford Avenue. Hughes’ occupation was commercial artist. The 1922 Belmont city directory had the same address.

In 1921 Hughes contributed art to the Boston Post which serialized previously published novels including The Wings of Youth, The Elephant’s Board and Keep, and Miss Vannah of Our Adv. Shop.

Hughes exhibited a painting in the Provincetown Art Association’s Fourteenth Annual Exhibition of Paintings, Drawings and Prints which ran from July 29 to September 8, 1928. Her listing appeared as “39. Dorothy Stuart Hughes, Commercial Street, West End.” The following year Hughes was on the entertainment committee.

In the 1940 census, Hughes resided in Rockport, Massachusetts at 34 Granite Street. She owned the house. Her occupation was commercial artist working in the newspaper industry. Hughes earned $3,315 in 1939. Gloucester and Rockport city directories, from 1939 to 1944, listed Hughes at the same address.

Records of Hughes whereabouts after 1944 have not been found. A 1955 Harvard Alumni Directory said Eric Duff Forsbergh was living at Hughes’ house in Rockport. It’s not clear if Hughes passed away or moved before 1955.

The Social Security Death Index does not have a “Dorothy Hughes” who was born on November 25, 1897 but it does have a possible match in “Dorothy Marsh”, born on that date, lived in Massachusetts and passed away April 1965. 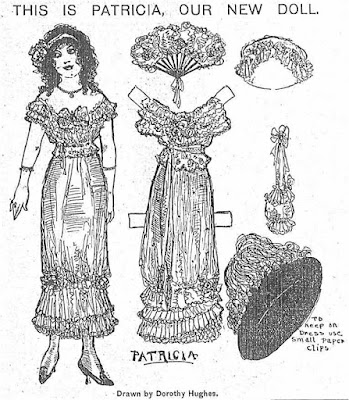 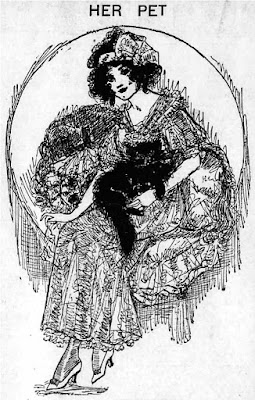 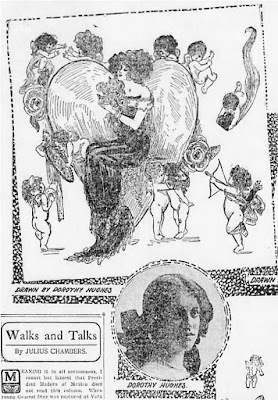 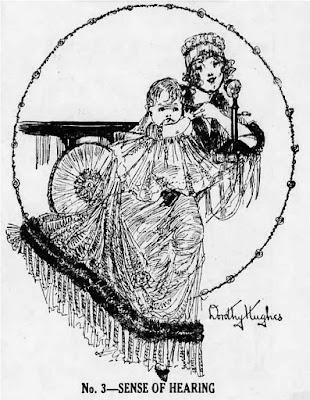 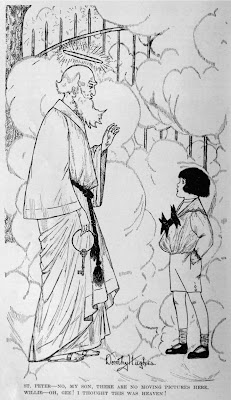 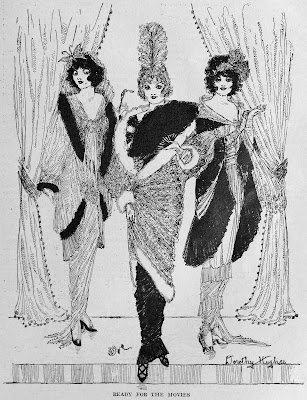 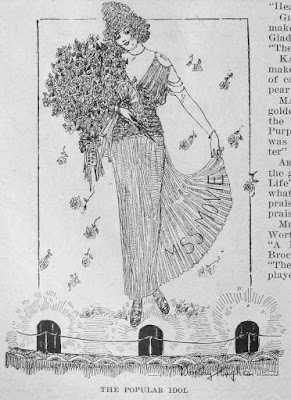 December 1915
Answers to Inquiries
page 146: Togo.—You ask what happened to Dorothy Hughes. Nothing, except she doesn’t submit drawings any more.

page 154: Nellie, Montreal.—Dorothy Hughes does not submit drawings to us any more. She is studying art.