Obscurity of the Day: Cinderella Suze 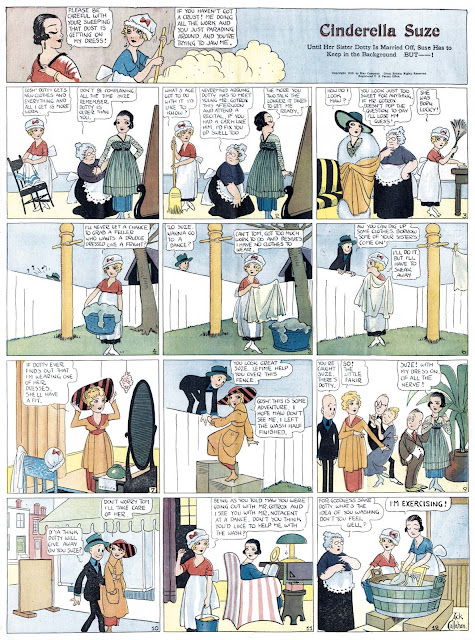 Jack Callahan was a real dynamo of the Hearst cartooning bullpen in the 1910s, and one of his tasks was to quickly produce substitute material when the syndicate was caught short. Cinderella Suze is a case in point.

In June 1918 the premier Hearst Sunday comics section, operating under the Star Company moniker, had the good fortune to bring on board the great Rube Goldberg, who was starting a new strip for them called Boob McNutt. At the same time, Fred Opper seems to have tired of producing Happy Hooligan, and he came up with a new strip, The Dubb Family. The Sunday section was in flux, and for some reason they needed Jack Callahan to fill in for three weeks.

Thus was born Cinderella Suze, a fun strip which features a mother and her two daughters playing out a modern version of the Cinderella story. Older daughter gets all the attention from her god-digging mother, who hopes she'll snare a rich husband, while younger sister Suze toils in rags. Of course Suze ends up turning the tables on her family in each breezy installment.

The strip ran June 2, 9 and 16th 1918, and then with the debuts of Boob McNutt and The Dubb Family the next week was presumably gone forever. However, Cinderella Suze was asked for a curtain call almost two years later on April 18 1920 when Jimmy Swinnerton was apparently unable to produce a Little Jimmy strip for that day. This time Cinderella Suze, still toiling in the shadow of her sister, ran under the International Feature Service banner for her swan song.

Comments:
Hello Allen-
Do you think the 1920 strip was actually drawn in 1918, and just sat around for two years as an emergency stop-gap, as they did many times in the early 1910s, or was it a new piece of art, with an eye to maybe launching a new series?

Good question Mark, and the answer is that the 1920 strip was almost certainly drawn in 1920. Comparing it to the 1918 strips, Callahan had tinkered with his style, which he presumably wouldn't have if it was drawn at the time of the original series.