Obscurity of the Day: Gabe 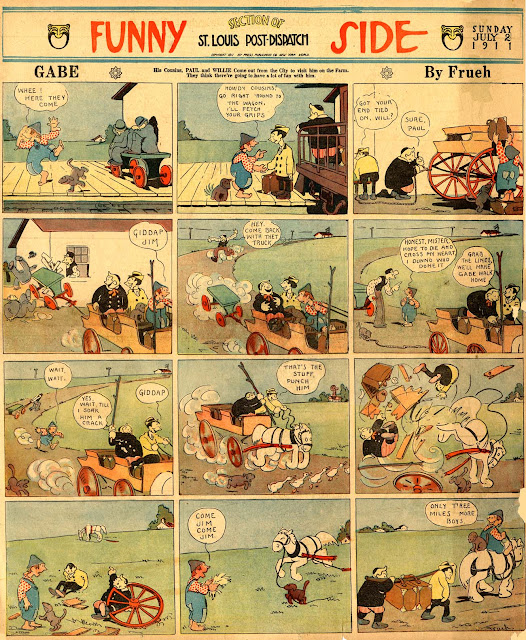 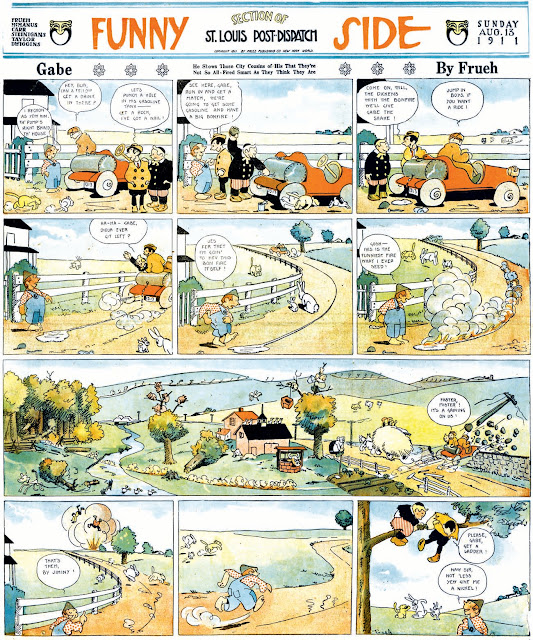 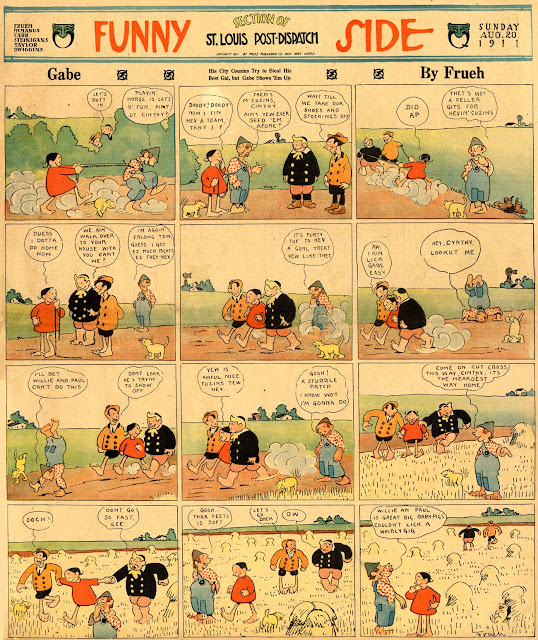 Famed caricaturist Alfred Frueh started his career at the St. Louis Post-Dispatch, but as far as I know he never produced a comic strip series for them. When he was transferred to the New York World in 1911, in addition to caricatures he was assigned his first comic strip series, which premiered on July 2 1911. Gabe got pride of place on the cover of the Sunday funnies section pretty consistently for months, a tribute to Frueh's elegantly simple and tremendously expressive art.

Frueh's lovely art is in service here to an overdone concept, the city kids versus the country kids. In Frueh's take on the subject the city kids are initially practically homicidal maniacs, and the country kid is about as dumb as a bag of nails. Frueh slowly began to find his footing, with the final example shown above toning down the Katzenjammer-esque antics and offering some real humanity to the proceedings. This is how the strip would be written from then on, featuring more gentle humor and a little compassion for the country kid Gabe, especially in his attempts to woo Cinthy.

Gabe ran for over a year, ending on August 18 1912. As the strip got better, ironically it was more and more often relegated to an inside half-page. Frueh would not make it back into the Sunday section for eight years after this, finally returning with Hem and Haw.

Comments:
I love the little dog in "Gabe", it's fun to watch it running through the panels and wagging it's tail. The August 13th strip is particularly charming as the little dog is joined by two rabbits that lope through the countryside making circles from foreground to background. They seem to be having an argument in the last panel. This is the best Al Frueh art I've ever seen.

Thanks for posting the GABE strips and the bio on Frueh. The auto strip's reprinted in the Sunday Press volume SOCIETY IS NIX. Freud's one of my favorites and got so much from the fewest lines. Interesting that his later cartoons were more elaborate with shading and such, as seen in the New York Public Library book collection FRUEH ON THE THEATRE. Thanks again, Allan!

Congrats to Brian for making the most appropriate Freudian slip I've ever encountered.

Courtesy of my Jungian Spellcheck!