Don C. Wilson was born around 1881 in Lincoln, Nebraska. His birth date is based a census record and the birthplace was identified in magazine and newspaper profiles. Wilson has not yet been found in the 1900 and 1910 U.S. Federal Censuses.

A profile said Wilson was self-taught. Here is a rough timeline of his career.

Late 1890s
Wilson was hired by Colonel D. R. Anthony to work at the Nebraska State Journal and, later, the Leavenworth Times (Kansas).

1901
Wilson resided at 1939 N Street, in Lincoln, Nebraska, when his cartoons were published in The Inland Printer’s October and November issues.

Late 1901 or early 1902
After the The Inland Printer magazine exposure, Wilson was hired by Mr. H. H. Fish of the Western Newspaper Union and employed for about eight years.

1902
Wilson’s cartoon appeared in the October issue of the Satellite published by Hal Bixby from Chicago.

1908
William Schmedtgen hired Wilson to be sports cartoonist at the Chicago Record-Herald. Wilson was mentioned as a Record-Herald cartoonist in the Marion Daily Mirror
(Ohio), September 11, 1908.

1910
Wilson was employed at the Chicago Daily Tribune, where American Newspaper Comics (2012) said Wilson drew Let the Little Tribune Wan-Tads Get It for You.

1911
The January issue of The Inland Printer featured Wilson again. 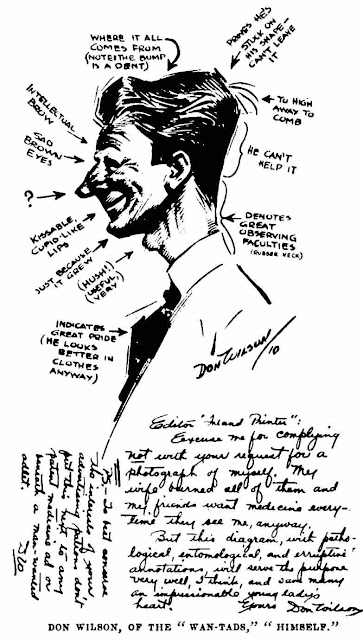 The “Tip” and “Pull” Man of the Chicago Tribune.

Don Wilson, the Chicago Daily Tribune’s own special want-ad. cartoonist, has evolved a pair of most engaging and persuasive twins, called “Tip” and “Pull,” who work together persistently and satisfactorily; and, despite the fact that the “stunt” is an advertising one, the quaint gnomes are droll and really humorous. There is a weirdness in their prompt execution of orders; the man or woman who happens to cross their path has no chance of escaping a good job. They cover every field of endeavor — sell things, buy things, get you a job, get you an employee — “put you wise” to every good thing you may desire.

Don Wilson, when spoken to on the subject of his creation, said: “This interview stuff gets my goat. Every time I read an ‘interview’ I feel sorry for the boob who has to stand for it — unless he’s an actor. Actors feed on such fodder, you know — but the personal note in an article of this sort sounds too much like bunk.

“Yes, The Inland Printer was kind enough to give me a boost some nine or ten years ago. I was fooling with the dangerous art of cartooning in the old chalk-plate days on the Nebraska State Journal. Old Colonel [D. R.] Anthony (who is about the last of the old-time ‘fighting’ editors) used me afterward on the Leavenworth Times. One day I sent you a bunch of really funny pen-and-ink drawings (funny because they were rotten), and you told the world about me and showed me up with my stuff. Mr. H. H. Fish, of the Western Newspaper Union, sent for and got me. Some eight years in his service put me all to the good. Afterward, Mr. William Schmedtgen, of the Record-Herald, took me on as sporting cartoonist. Following this momentous period, while the whole United States held its breath, I did a lot of good bum stuff. Anyway, to cut a long story short, the Chicago Tribune, recognizing my supernal gifts and the excessive merits of my ‘Tip’ and ‘Pull,’ grabbed me up.

“Speaking seriously, I really think I have created something positively new in ‘Tip’ and ‘Pull.’ There never were two characters in all comic art so dissimilar, yet so cooperative, so original, or unprecedented. To myself I hug the unction that no one can find their individual or collective doubles in any publication of any date, in Europe or America. They stand alone.

“There are curious coincidences in my connection with the great Chicago Tribune. Not to mention Mr. Bryan, of perennial president fame, who hails loudly from Lincoln, Nebraska, U. S. A., there are quite a few who have attained equal, or less, distinction in other lines, who come from the same old town. Herbert Johnson, of the Philadelphia North American, is another; Claire Briggs, of the Chicago Tribune, is another; Don Wilson is another. It must be understood, however, that no blame is laid to Mr. Bryan.

“I can’t say enough about The Inland Printer. I really got my first start in the art game through its columns. Not only am I grateful, but I am always impatient to see the next number. It represents the art preservative as the Bible represents all religion. You will find The Inland Printer in nearly every office in the Chicago Tribune building. You will find it in my fifteen-year collection of art works. I am quite glad that you have paid attention to me.”

Mr. Wilson was born and reared in a printing-office, and is thoroughly imbued with the newspaper instinct. His rise was inevitable, and more will be heard from him later. To be employed jealously by so great a newspaper as the Chicago Tribune is an honor coveted by many another ambitious newspaper worker. 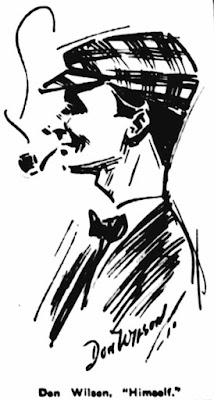 
Six Dead from “War Whiskey” Sold as Drink
One Other Dying and Bleecker Street Saloon Keeper in Custody.

Six men died yesterday as the result of drinking “war whiskey” and another is in a serious condition from the same cause. Six of the victims lived in the Mills Hotel in Bleecker street and the seventh lodges in that vicinity.

The “war whiskey” is believed to have been made of wood alcohol or some other inexpensive poison to substitute for the liquor which saloon keepers were able to dispense for ten cents a drink previous to the increase in taxes. An autopsy will be performed on one or more of the men to establish the exact poison that is being sold, but there !s enough evidence from the condition of the victims to warrant strong suspicion of wood alcohol. Those of the victims who were attended by physicians before death or lapsing into a coma were found to have suffered complete paralysis of the optic nerves.

There is no bar at the Mills Hotel. Furthermore, it was pointed out at the hotel that two or three of the men were found not in their rooms, but on the street.

The first case that came to the attention of the police was that of Charles Collins, who early Monday morning was found lying in Bleecker street, near Macdougal. He was taken to Bellevue Hospital suffering apparently from alcoholic coma. He died early yesterday morning. Collins, it is said, was a porter in a saloon at 155 Bleecker street Late last night Antonio Dealfanso, the proprietor, was locked up pending an investigation. In the saloon were found bottles labelled “Kentucky’s Best Whiskey.”

A bottle of whacky bearing that label was found in the room at the Mills Hotel. Clinton Arnold, a salesman, who died shortly after 5 o’clock yesterday afternoon, a few hours after being taken to a hospital. One victim, according to the police, said last night in St. Vincent’s Hospital he had purchased the liquor which caused his illness at the Bleecker street saloon. Dealfanso told the police he had purchased his stock from an express man.

Charles K. Jones, found on the street near the saloon at 5 o’clock yesterday afternoon, died a few minutes later at St. Vincent’s. Patrick Cahill, found in his room ill with alcoholic poisoning earlier in the day, died late last night.

Two other lodgers at the hotel were taken to St. Vincent’s in serious condition. They are Harry Burke and Elmer Smith. Smith died early this morning.

Was Soon to Be Married.

Don C. Wilson registered at a rooming house at 510 Broadway at 1 A. M. yesterday. Apparently he was intoxicated. When an attendant went into his room at 6 o’clock last evening he was lying dead. Wilson, shortly before his death, had written a letter to a friend in which he indicated that until recently his address had been at 1959 Broadway. Several letters in his possession were from a brother who is traveling with a circus.

One letter which Wilson evidently had just written was signed “Uncle Don,” and was inscribed to “Ruth.” It told of his coming marriage to the actress, who, said the letter, was beautiful and charming and talented” and “such as you will be proud of and like.” She had been at various times engaged in productions by leading film companies, had posed for one or two artists and had appeared in the spoken drama. Wilson wrote that his fiancee was accomplished in music. He met her, he said, at the Art Students’ League in 1915.

At the boarding house it was said that the man had spoken of having been a cartoonist and portrait painter, but that he had had recent reverses in his finances. On the police register he is down as a waiter. At the Broadway address, which is a building of many studios, among other forms of apartments, no one could be found last night who knew Wilson.

Societies which have in recent years endeavored to obtain legislation prohibiting the manufacture in the United States of wood alcohol have pointed out that several countries of Europe, notably Great Britain, now have such laws. The drug is one of the most deadly poisons known. Swallowed in exceedingly small quantities it causes blindness and internal disorders. It may cause paralysis of the optic nerves even if only inhaled.

In most cases where deaths have resulted in New York through the drinking of wood alcohol the trouble largely has been through ignorance of druggists or saloon keepers that the liquid was poisonous. It is for that reason that steps have been taken to limit its sale and to prohibit entirely its manufacture.