Obscurity of the Day: Let The Little Tribune Wan-Tads Get It For You 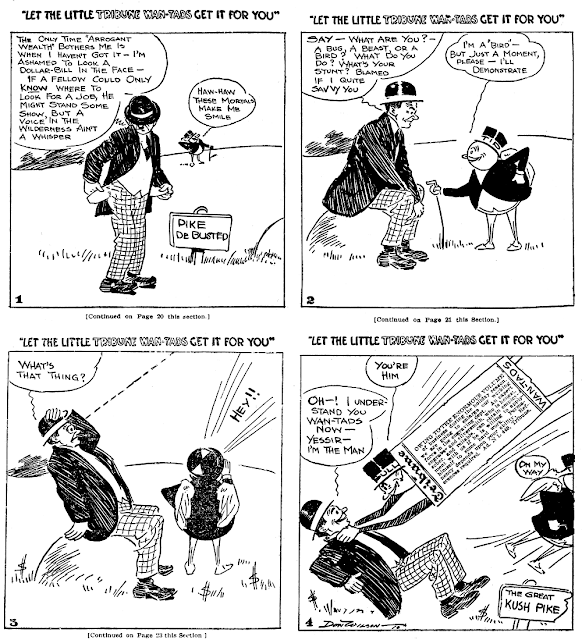 There have been a lot of comic strips created to help pull readers into the newspaper classified section, and one of the earlier ones is from the Chicago Tribune. In 1910 they put on a marketing effort that initially placed a strip on one page of the classifieds. The strip starred Tip and Pull, a pair of flying sprites who gave a new lease on life to some poor hapless schmuck in each episode. How did they do that? Why, by directing said schmuck to the classified ads in the Tribune, of course.

The rather loquacious title was originally Tip and Pull - Let The Little Tribune Wan-Tads Get It For You when it debuted on October 17, but it wasn't long before the tads' names were left off in a nod to overworked typesetters.

The strip wasn't terribly interesting, frankly, but then someone in the Trib marketing department had a truly brilliant idea.  They changed it so that each panel of the strip ran on a different page of the classified section. Result: readers had to look through the whole section to read the comic strip. It would only be by the time they got to the final panel that they'd realize they'd been had and there was no real gag waiting for them. Despite the brilliant idea, the strip didn't have a long run, last appearing on December 2 1910.

The strip was created by Don Wilson, who left few footprints I could find. I don't have any other listings for him. He was doing some serviceable cartoon cuts for Chicago's Suburban Economist in the 00s, but his common name makes him too hard for me to track. But fear not, the intrepid Alex Jay has uncovered his story. And it's a sad one, too. Be here tomorrow for Don Wilson's Ink-Slinger Profile.

Comments:
Hello Allan-
On the topic of the Want Ad genré,some of you onetime readers of the old King features "Ask the Archivist" blog might recall an entry I put together in 2016 about "Cholly The Classified Kid" by Milt Youngren from 1928-9. I had found a short run of this oddball panel, but frustratingly enough, the paper that ran it resisted publishing the feature's name!
At the time, your (Allan's) research suggested the title was Cholly the Classified Kid or Classified Cholly, depending on different sources. I guess I'm asking if any further information has ever been found on it?

Hi Mark --
I just ran the feature through a new battery of searches on newspapers.com, and still no hits.