Obscurity of the Day: After Dark 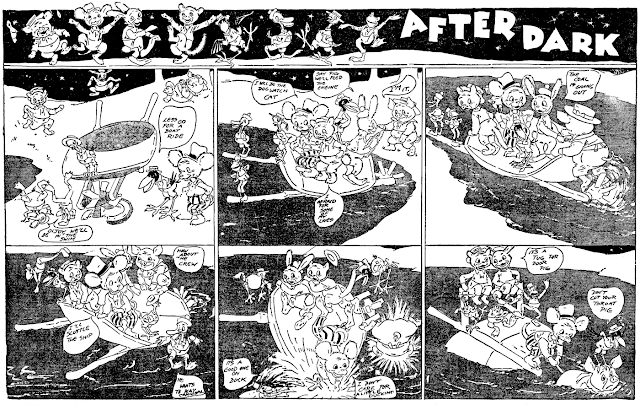 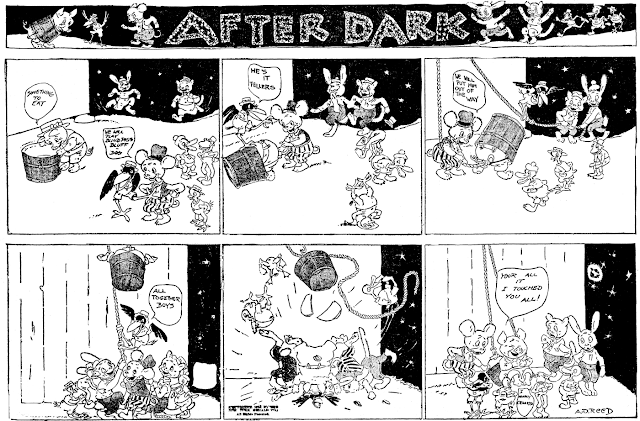 Poor Farmer Jones. His farm is going bankrupt because the animals he raises all turn out to be tough, sinewy and underweight. The cause is a mystery. His livestock sales contracts have all been cancelled and the local butcher won't even discuss buying from him anymore. Farmer Jones and his family are all weak and nervous because of his business troubles combined with a lack of protein in their diets. If only someone in the family had the strength to stay up late one night and check on the animals, the problem would be made clear to them. After dark, it turns out, the animals don't sleep as they should, but engage in all sorts of wild hijinks all night long. No wonder they are worthless at market!

The mysterious A.D. Reed, whose biography is unknown,  made his comics page swan song with After Dark, which he sold to the New York Herald in 1912. The strip was pretty much his typical fare, rather hastily drawn and with frenetic action in place of genuine humor.  It only lasted five weeks, from March 17 to April 14.

Mr. Reed did not retire outright at this point. We find him dipping his drawing pen one last time in 1916, credited as an animator in the Bray organization.

PS: I'm delighted to say that Alex Jay has unearthed some biographical details about Mr. Reed, so be here tomorrow for his Ink-Slinger Profile!