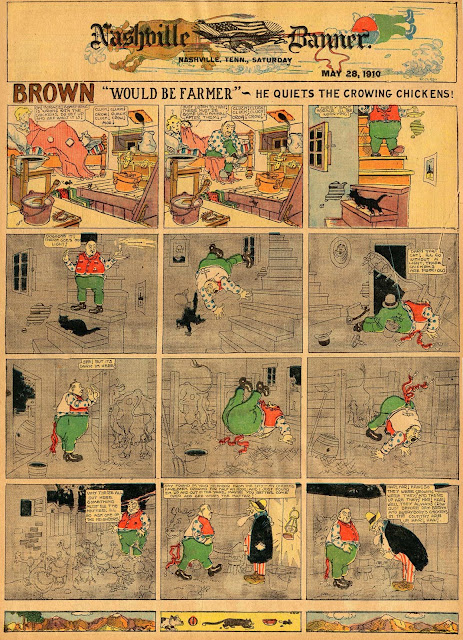 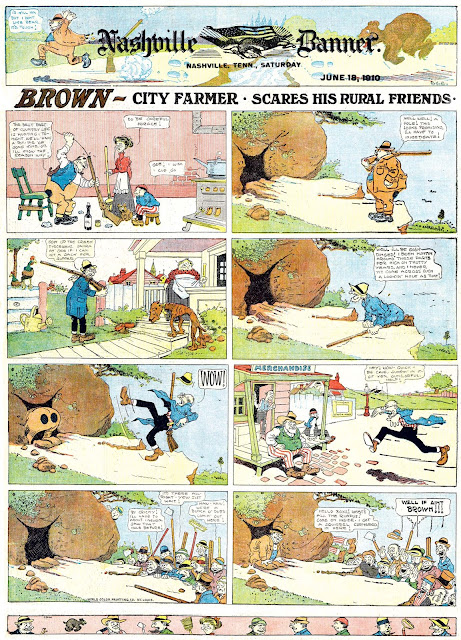 The last original comic strip that Raymond C. Ewer came up with for World Color Printing was Brown - City Farmer. It was a table-turning idea on the hackneyed 'hayseed in the big city' formula that was almost as ubiquitous in early comics as rotten little prank-pulling kids.

Brown - City Farmer debuted on May 15 1910, with the first few installments titled Brown, Would-Be Farmer. The plot had a couple move from the big city onto a farm, looking for the bucolic country life. Of course in comic strip land, farms are the sites of violence, noise, danger and general mayhem that can put Hell's Kitchen to shame. Ewer was given the headline full-page position on the World Color Sunday sections, making him the biggest fish in the WCP's not-very large pond.

Brown - City Farmer used frenetic action as a substitute for real humor, and it really didn't amount to much. It wasn't too surprising then that when George Frink, the creator of the Chicago Daily News' popular Circus Solly came to call at the syndicate months later, Ewer's strip was immediately downgraded, with Frink's Slim Jim and the Force, merely a renamed Circus Solly, moving onto the front page position.

Ewer, perhaps recognizing that this strip wasn't his ticket to fame, soon dropped it, the last installment running November 6 1910. He'd have the last laugh, though. Under unkown circumstances, Frink soon left World Color, and apparently offered no objections to WCP continuing the feature he brought to them. Ewer became the cartoonist of Slim Jim for the next four years, taking back the pride of the headliner position on the WCP comics section.

Comments:
Was there supposed to be a punch line in those comics? Yeeesh!

p.s. I came across your blog recently - love it.