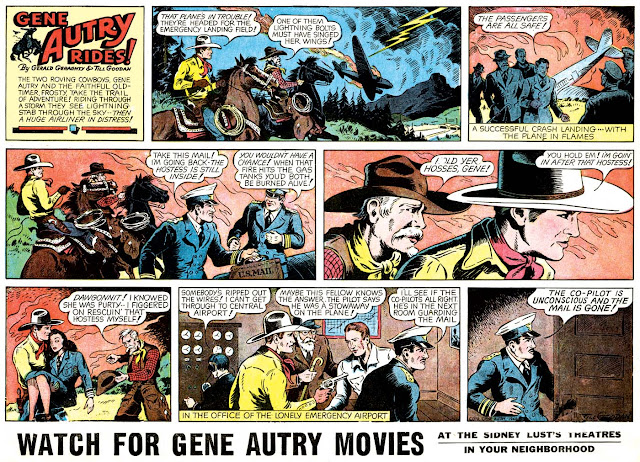 The popularity of movie cowboy Gene Autry, and the star's penchant for improving his bank balance by cross-marketing his fame, led inevitably to a newspaper comic strip offering. Well, two actually, but in a case of putting the cart before the horse, we already covered the second Gene Autry strip waaaay back in 2007.

Gene Autry Rides debuted on January 14 1940* as a Sunday-only strip written by Gerald Geraghty and drawn by Till Goodan. The strip was distributed by the Register & Tribune Syndicate, but the copyright was held by Mr. Autry. The comic strip market was not flooded by cowboy strips like it would be a decade later, but Gene did face competition from Broncho Bill, Red Ryder, and probably a few others that don't come to mind. Some help?

Anyway, the strip was an uneven though generally handsome looking production, and the storyline, which apparently was often tied to the star's movies and serials, was fast-paced and full of action. Oddly, though, it found very few takers. Why? My guess is that Gene Autry felt that his name on a comic strip was worth a surcharge over other comic strips, and directed the distributor to put the screws to potential clients. I have no inside information to back that up, but the fact that very few papers picked up the strip, and those were major ones who could afford to try out an expensive addition to their comics pages, lends credence to my hypothesis.

When Gene Autry Rides failed to make much of a blip on Sunday newspaper sales, those same big clients were just as quick to drop the strip. No definite end date for the strip has yet been determined, but the latest I have in my collection is a January 19 1941 episode from the Washington Star, and a note that the latest I've seen on microfilm was April 20 1941**, except that I stupidly forgot to write in the name of the paper.

Artist Till Goodan was an honest to goodness cowboy who came off this assignment running. He went into comic books afterward and produced lots of western material for them in the coming years. He also produced illustrations and some fine art, all of the western genre, along the way. According to a website that I suspect is run by his family, he died relatively young in 1958, but the Grand Comic Book database has credits to him running into the 1970s. Some are probably just reprints, but many are oddball items outside his usual genre, so not sure what the explanation might be.

Gerald Geraghty was a film screeenwriter whose output was primarily westerns. He was quite prolific, with his filmed screenplays numbering well over fifty. He also died quite young in 1954.

* Source: Atlanta Constitution
** Jeffrey Lindenblatt tells me the strip ran to this date in the Cincinnati Enquirer, and he thinks this was probably the actual end date.

Comments:
Like the singing cowboys movies themselves, it looks a cross between the 19th century Old West and 20th century technology.

I've seen the strip in The Detroit Free Press and The Boston Globe. I also think 4/20/41 is the final strip.
The strips were also reprinted in Fawcett's Gene Autry comic book.

The Comic Strip Project website quotes Ron Goulart’s The Encyclopedia of American Comics: From 1897 to the Present as indicating 1939 for the strip - would like to see a copy of Goulart’s book to see if it cites a a primary source.

Hi comicstripfan -- No, Goulart cites 1940 in his Encyclopedia. --Allan

Thanks for the clarification Allan. Sidebars to the short history of Gene Autry comic strips (of which you are probably aware) include the following: (1) Further to your blog entry of Annie Oakley July 28, 2008, a few biographies of Autry confirm that early in 1952 Autry and some business partners purchased the TV, radio and merchandising rights to the Oakley strip; this led to the creation of the Oakley TV show featuring one of Autry’s romantic interests; however, instead of the Oakley strip being allowed to continue, Autry pre-empted the potential competition (or felt he could do better) by restarting his own strip again later that year; and (2) Tom Gill, prior to becoming a long-successful artist of the Lone Ranger comic book, originally couldn’t draw a horse. He made himself learn when (as he said) Autry’s reps asked him to do a comic strip for the “singing cowboy movie star” - he drew 2 weeks worth but was turned down by syndicates already preoccupied with Roy Rogers, Cisco Kid and other western entries - a timing problem.