Dow Overbaugh Walling was born on June 6, 1902, in Whatcom, Washington, according the Washington birth records at Ancestry.com. His parents were Samuel Edrick Walling and Susan Irene Overbaugh.

Walling was four years old when he was bitten by a huge St. Bernard dog. The Bellingham Herald, July 2, 1908 said:


The dog grabbed the child by the back, lifted it from the ground and shook it as he might have shaken a rat. From fright and pain the child was almost unconscious when picked up and carried home by some neighbors who rushed to the scene. The flesh was horribly lacerated, having been torn by the weight and the vigorous shaking. The teeth had penetrated to a great depth.

Two physicians were summoned. They worked over the child for several hours and it is thought that no vital injury will result.

In the 1910 U.S. Federal Census, Walling was the youngest of three siblings. The family resided in Bellingham, Washington at 814 Maple Street. Walling’s father was a manager in the iron works trade.

The Herald, March 19, 1915, reported the school operetta, “When Mortals Sleep”, which included many storybook characters as well as Santa Claus, who was portrayed by Walling. 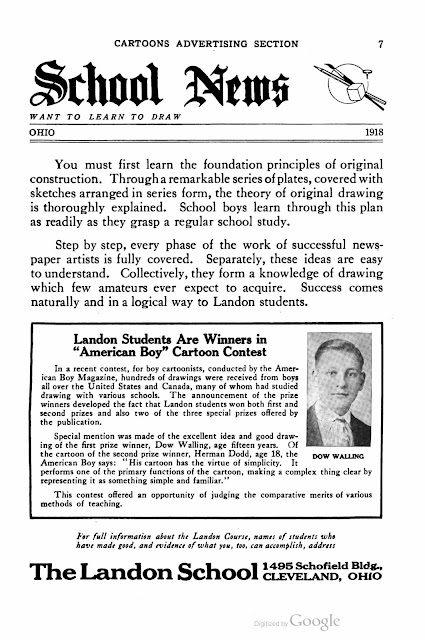 Walling attended Whatcom High School in Bellingham. The 1919 yearbook, Kulshan, had a page with his verse and art. 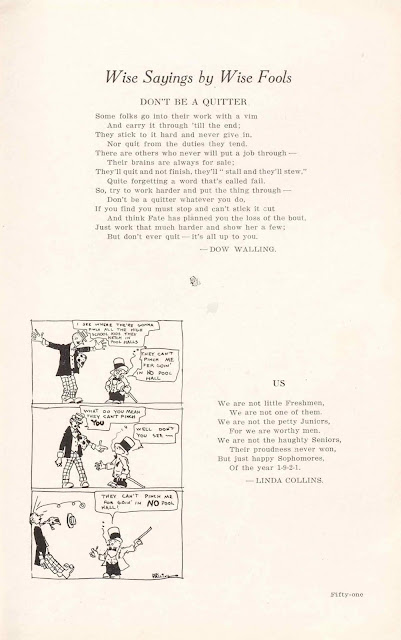 The 1920 census said Walling continued to live with his parents in Bellingham at the same address.

According to the January 11, 1921 Herald, Walling was one of thirty-nine Whatcom High School students to graduate. Walling continued his studies at the University of Washington in Seattle.

The Herald, January 27, 1923, mentioned Walling was an artist and art editor on the Sun Dodger, the university’s comic magazine. Also, he was a member of the Hammer and Coffin, national comic publication fraternity.

Walling was an athlete. He was a member of the varsity rowing team which qualified for the June 28, 1923 national intercollegiate rowing championship in Poughkeepsie, New York. Several days before the competition Walling suffered blood poisoning from an insect bite but recovered just in time to lead his team to victory over Navy, Columbia, Syracuse, Cornell and Pennsylvania.

The Herald, July 7, 1923, printed Walling’s letter about the victory to his mother. He referred to insect bite.


You have perhaps read about my rowing with a sore leg. Don’t worry about that, because I am feeling all right now. I had to row in the race, mother, or we never would have won. I had the best medical attention.

Under separate cove I am sending home the bacon—the sweaters of the rival crews.

The Literary Digest, July 12, 1924, wrote about the college rowing teams and said “[Dow] Walling is the young Hercules who stroked Washington to a heart-breaking victory over Navy last June. This season he was relegated to No. 6, to make room for last year’s freshman stroke.”

The Herald, November 2, 1923, said Walling and Kirk Heere were charter members of a comic-literary honorary fraternity, Sigma Omicron Lambda, at the university. The paper mentioned he provided college sports drawings for the Seattle Post-Intelligencer.

The Washington Newspaper, December 1923, said Walling was on the art staff of the Seattle Post-Intelligencer.

Walling graduated in 1925. The Herald, October 14, 1988, said “He received a bachelor of science degree in business administration. …”

The 1930 census recorded Walling in Manhattan, New York City at 134 West 82nd Street. He was a newspaper artist.

Walling drew Nutty News which was written by Ed Roberts. The King Features Syndicate series ran from March 17, 1930 to September 1930. Walling was one of six artists to draw Room and Board which began May 21, 1928 with Sals Botswick. He was followed by Brandon Walsh, Benbee, Darrell McClure, Walling (March 2 to October 10, 1931), and Herman Thomas. Central Press Association was the syndicate.

For the New York Tribune, Walling created Skeets, his longest running series from May 1, 1932 to July 15, 1951. He had occasional assistance from Al Plastino and Jack Sparling.

In the mid-1930s, Walling moved back to Bellingham. A late-October 1934 issue of Literary Digest printed, in its “Comics and Their Creators” series,  his autobiographic sketch.

The 1937 city directory listed the cartoonist at 1106 Jersey Street which was the home of his brother, Samuel, and sister-in-law, Susan.

Walling submitted an autobiographical sketch to the Herald, January 2, 1937.


“Dow Walling—Born in Bellingham, Washington, in 1902. Spent most boyhood on farm near Bellingham. Do not remember when I didn’t have a desire to draw. Never studied art. Boyhood Ambitions, besides being a cartoonist, were to be an actor, scientist, song-writer, wrestle, musician and magician.

“Six feet, two and a half inches tall, and weigh 195 pounds. Came to New York in 1925. Sold drawings to College Humor, Life, Judge and other publications. Always wanted to draw a kid strip, and, in 1932, the New York Herald, for which Skeets was created, gave me my first opportunity.

“In my mind Skeets lives in Bellingham—my home town. I feel that Bellingham, an average-sized town in America, typifies the home town of the average boy. I attempt to make Skeets human, rather than funny.”

Walling married Helen Pickrell on July 28, 1937 in Colfax, Washington. Their marriage was covered in the Herald, August 2, 1937.

In the mid-1930s, Walling moved back to Bellingham. The 1937 city directory listed the cartoonist at 1106 Jersey Street which was the home of his brother, Samuel, and sister-in-law, Susan. Later that year Walling married Helen Pickrell on July 28 in Colfax, Washington.

In the 1940 census newspaper cartoonist Walling and Helen made their home in Clarkstown, New York.

From 1944 to 1948 Walling produced three space-filler comics for the New York Tribune: This ’n‘ That, Butter Side Up and Bedelia.

The 1946 Manhattan city directory said Walling had an office at 421 Lexington Avenue.

Walling’s Jimmy’s Jobs appeared in The Carbuilder and in its October 1949 issue said:


On the back page of this issue is the latest in a series of Jimmy’s Jobs cartoons. Dow Walling (and that’s his real name) who draws Jimmy, is one of those rare people who can always see the brighter side of a heartbreak. He says, “My youngster is the Jimmy in the drawings. He gets himself into the darndest messes. Thought I could put a moral into his doings, and show how Jimmy’s difficulties are really economic laws operating on a small scale. Do you like ’em?”

Walling passed away January 23, 1987, in New Rochelle, New York. He was laid to rest at Colfax Cemetery. The New York Times, January 28, 1987, published the Associated Press obituary which said in part, “Mr. Walling was a founding member of the National Cartoonists Society and did promotional cartoons to help sell United States War Bonds during World War II.” His NCS profile said said he was vice-president of the society from 1949 to 1950.

Comments:
I used to have a short run of the Bellingham erald from the 1920's, and Walling made the front page once for saving some kids from drowning!
You can add to his list of features "Rocky Stoneaxe" which drew for Boy's Life in the 1950s, it was a caveboy series, often reprising old Peter Piltdown gags.

Thanks for the additional information on Walling. I was told Min Matsuda also ghosted Rocky Stoneaxe. She used to work at the comic book shop Biro-Wood.