Alexander Popini was born on October 6, 1877, in Bucharest, Romania, according to his World War II draft card and naturalization petition. Popini’s Social Security application said his parents were Stephen Popini and Pauline Aslan.

Much of his early life and career was told in the Fourth Estate, February 27, 1926.


Alexander Popini was born in Rumania, he says, of Rumanian—but honest—parents, who, when his turn came to pick a career, voiced strenuous objections to has selection of a career in art.

Popini graduated from Bucharest University. … When his father learned that young Popini was consecrated to artistic endeavor, he played the Roman father and in substance said that he had raised his boy to be “a gentleman—not an artist.”

So Popini’s allowance was cut off and he was left in Paris to make his way as best he could. Eventually he became a well-known illustrator for Paris weeklies.

A while later he went to London. He remained in England for ten years, working for leading English publications and at the same time serving as chancellor to the Rumanian legation. He was for a long time on the art staff of the London Daily Mail.

He was a lieutenant in the British cavalry for four years, toward the termination of the South African war.

On one of his vacations from the diplomatic service, he came to New York. He liked this country so much that he sent in his resignation to the diplomatic service and remained here. That was 16 years ago. [A passenger list recorded Popinion on the steamship St. Paul which departed Southampton, England on February 29, 1908. The ship arrived in New York on March 8. Popini arrived in America 18 years ago.] He did illustrations for various periodicals, particularly Life. Then he joined the staff of the New York Sunday World.

The World War broke out, and Popini forthwith went to Canada and joined the Royal Air Force. He became a pilot, then an instructor, then went “over” and took part in some real fighting. Just as he was about to be made commander of a squadron that was to bombard Berlin, the war ceased. Evidently the Germans had heard that Popini was coming!

After the war he was in London for a year, but receiving numerous requests to come back to America he did so, and four of five years ago, was invited by Alexander Black to join the staff of King Features Syndicate. He has been doing work for this syndicate ever since—illustrations for features, magazine covers, and social cartoons for the New York Evening Journal.

In his studio he does portrait masks. He has had exhibitions in London and Paris. He is an able writer and sculptor, working along these lines for his own amusement.

Other sources of amusement he takes ample advantage of are flying, skating and horseback riding.

“The most important thing I do in life,” he declares, “is seeking to acquire some understanding of it all. I want to know everything.

“You might say I am conducting private warfare of my own against everything that smacks of ‘hokum.’


On Popini’s naturalization petition it said he was in the Canadian Army beginning August 1916 and honorably discharged January 18, 1919. The petition also mentioned his ex-wife, Sybil Cox, who divorced him in 1915, and English son, Anthony. Popini’s ex-wife and son were Chicago, Illinois residents in the 1910 U.S. Federal Census. They lived with her parents. Popini has not yet been found in the 1910 census.

The 1920 census recorded Sybil, who remarried to Dorsey Hyde, and Anthony in Manhattan, New York City at 31 Morton Street. About five months after the census enumeration, Popini arrived in New York, from Liverpool, on June 5. 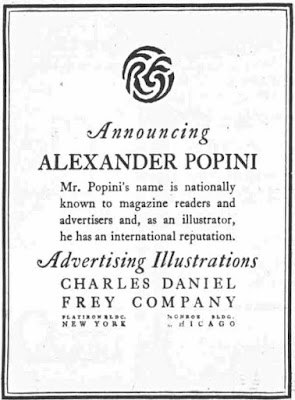 William Seabrook, in his 1942 autobiography, No Hiding Place, wrote:


I met a man named Alexander Popini who was fascinated by chess, its basic nature, its astronomical variations, its possibilities, problems. Before I’d met Popini, chess was a polite, intellectual parlor game whose rudiments I’d learned from Wigfall Trenholm. A week after I’d met Popini, the chessboard became my universe, and through my mad absorption I temporarily corrupted Mr. Alexander Popini. Popini was a Roumanian who’d been in the British Royal Flying Corps, had previously studied art in Paris and London, and was now a successful illustrator. He drew voluptuous girls in fine, hard pen-line, with a technique somewhat similar to that of Aubrey Beardsley. He had a permanent contract with Life to turn in a full-page drawing every week, a basement floor and garden on East Tenth just off the Avenue, and a young New England lady-friend, Joan Martindale …

There was Joan, marvelously beautiful, who used to bring us coffee when we sat down after dinner at the chessboard, but hated me and hated chess, and there was Katie, accustomed to my vagaries, who was tolerant, but worried. Joan’s hatred and Katie’s worry were soon justified. Popini stopped drawing for Life. I stopped writing for Hearst. We’d both been spending our easy money as fast or faster than we got it. It was a problem, an outrageous one … Popini and I had ceased to earn a penny, thought only in terms of “knight takes bishop” or “pawn takes rook,” and from dawn to dark and even while asleep were absorbed in Lilliputian campaigns, victories, defeats, queens, knights and castles. Nobody pays you anything for doing that unless you become a world champion. Rent came due and ran over to the next month, grocers were patient and then impatient, and then was the time when Joan and Katie, if they hadn’t been crazy in their nicer way than we were, should have walked away from there, should have gone away, back to Boston and Atlanta. Being as crazy as we were, but differently, Joan got some money

Katie’s contribution to our prosperity was the establishment, with Alexander Popini, of the coffee house on Waverly Place which still lives in legends of the Village’s golden age, and actually had a golden ceiling—not tawdry gilt but pure gold leaf laid on by Popini. They began it more for pleasure than profit, which was perhaps one of the reasons it soon became profitable, though both showed considerable astuteness in its organization and management. …


These Two Artists Certainly Have a Good Time
Alexander Popini and Louis Biedermann are favorites of fortune. Anyway, they share what is probably the nicest studio to be found within the confines of a syndicate or newspaper office.

Connected with King Features Syndicate, they are ensconced in a large room decorated in gold and black, with gold carpet. The furniture is silver and vermilion.

And on the walls are the best pictures that have been painted by each of them—authentic masterpieces. Louis Biedermann loves hunting, and there is a goodly array of swords and guns on the wall. But a pen in Biedermann’s hand is far mightier than any sword!

Popini's New Studio
Alexander Popini, famous artist connected with King Features Syndicate, is opening a new roof-garden studio on Fifth avenue near Fifty-first street, New York, where he will specialize in the making of life masks, a field in which he has attained great distinction. The studio will be among the most beautiful in New York.


According to American Newspaper Comics (2012) the Newspaper Feature Service had a long-running series of romantic cartoons which were credited to fifteen artists. The series ran from late 1913 to 1931. Popini contributed from April 26 to May 20, 1926. I suspect Popini used his mother’s name, Pauline Aslan, to create the pen name, Paul Aslan, who was credited with many cartoons during 1927. That same year Popini was drawing Her Love Letters for King Features Syndicate. For several more years Popini produced romantic cartoons for King Features and International Feature Service.

Popini signed his World War II draft card on April 25, 1942. His residence was the Sherman Hotel located at 71st Street and Broadway, New York City. He was unemployed. His description was five feet ten inches, 152 pounds, with brown eyes and gray hair. Popini wore a monocle.

Popini passed away June 22, 1962, in Manhattan, according to the New York, New York, Death Index at Ancestry.com. Two days later a death notice was published in The New York Times.