1926 starts out so innocently, with Annette Bradshaw and Juanita Hamel (JH) each making their appointed rounds. Hamel has her typical hiccups; in January Madge Geyer (MG) has a cartoon printed, while in February Neva Harrison (NH) gets one more turn at bat.  In April - May, Alexander Popini (AP) makes three appearances, his first contributions to the feature.

In July the train really goes off the tracks with substitutes all over, and Hamel's output is reduced to a dribble. Her final cartoon for the series appears on September 11. 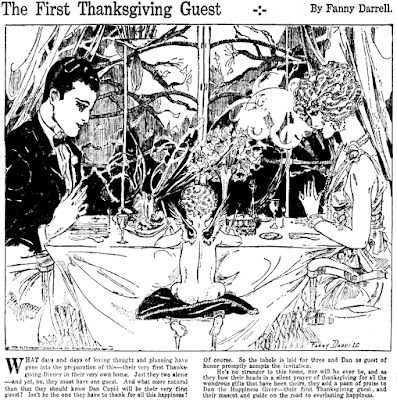 The romantic cartoon looks like an artistic cattle-call for the remainder of the year, with new and old contributors apparently jockeying for the position as Hamel's permanent replacement. Dorothy Flack (DF) seems like the leading contender at first, with sixteen cartoons printed in July - September, but then she disappears. Eleanor Hope nee Schorer (EH) is in there sparring with six cartoons. Fanny Darrell (FD), a newcomer to the cartoon, posts a very impressive 22 cartoons in the final months of the year, giving every impression that she has become the leading contender. Darrell's cartoons will indeed be with us for some time to come, though in my opinion she is one of the weakest of the contenders. On the other hand, she sure can crank out the work. 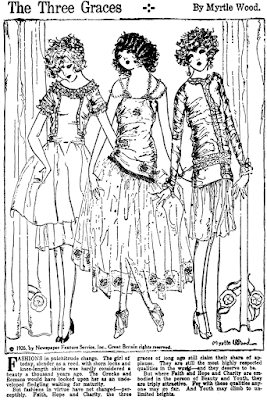 Others provide occasional cartoons; Myrtle Wood (MW) provides lovely cartoons in October and November. I wonder if her name is made up, because the only non-tree wood reference I can find to that name is a 1920s racehorse! 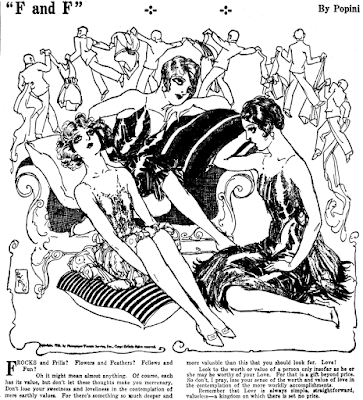 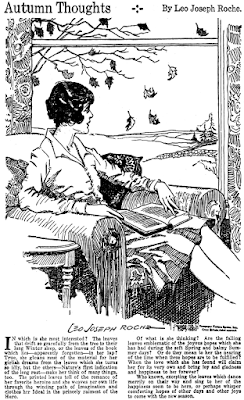 Popini (AP) returns for three cartoons during the scrum. Leo Joseph Roche (LR), whose given name is offered as George on his first cartoon despite a perfectly legible signature, manages four cartoons. He ended up serving a long stint as an editorial cartoonist on the Buffalo Courier-Express. 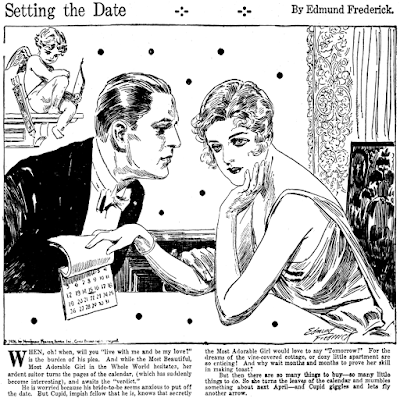 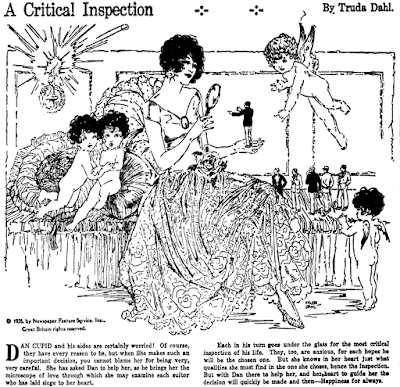 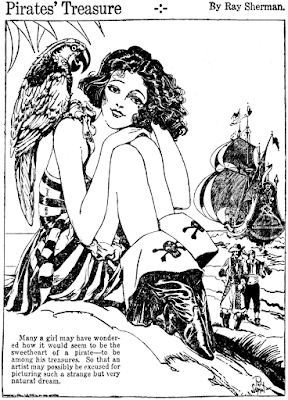 Ray Sherman (RS) offers up two gorgeous cartoons in August - September, but suffers the ignominy of being miscredited as "Ray Shilman" on one of them. I can find no information about the impressive Mr. Sherman, but surely he stuck to art and made good. 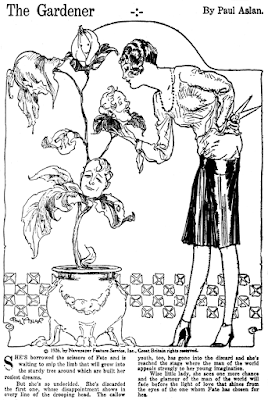 Paul Aslan (PA) has a cartoon in October and two in December. But if you are intrigued to find out more about this artist, don't bother searching for his non-existent biography because Alex Jay's next Ink-Slinger Profile will save you the trouble. 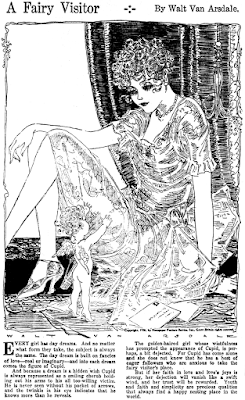 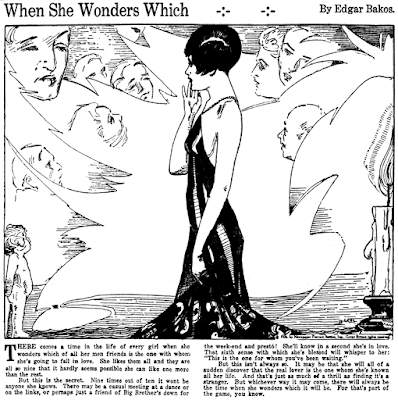 We have a couple of one-hit wonders this year: Walter Van Arsdale (VA) and Edgar Bakos (EB) each contributes a single cartoon.

Have you noticed that the captions seem to be getting a bit longer this year? Although just as flowery and vapid as ever, I'm wondering if a new writer has taken over. However, Winifred Black (my guess for the anonymous writer) is still writing for the page, so maybe not.

Comments:
Was there a different romantic cartoons
series that included Nell Brinkley? I have
seen a few by Popini that alternated with
hers in both the Syracuse Evening Telegram
and the Chicago American in late 1922.

Yes, Brinkley contributed to a separate but parallel series, usually credited to another Hearst syndicate, International Feature Service. I'd very much like to index that series as well, but I have yet to find any papers that ran it with enough consistency that I can even figure out for certain how it worked (part of a page, like this series, or standalone).