1925 is a year of big changes for the romantic cartoon. In July, Annette Bradshaw decides she's had enough of the Her Problems (HP)  panel, and from then on she does an illustration about home decor and furniture, often titled "Decoration Problems". Also, her panel Feminisms (F) changes titles back to Feminine Foibles (FF), last used in 1916, starting with the last appearance of this year.

Bradshaw's non-cartoon entry on Thursdays now makes the romantic cartoon a four times per week offering instead of the former five.

Another change is that Juanita Hamel (JH) starts to get frozen out of her spot in the line-up, as she disappears for almost two complete months.

As in 1924, there are lots of subs, but this year they tend to stick around much longer. Mary Lawson (MN), for instance, makes a single appearance in January, but then in July-August is back for six appearances. Marguerite Lewis (ML) pops up over and over: once in February, three times in March, once in April, once in June, four times in July, twice in August and once in December.

Eleanor Schorer, under her married name of Hope (EH) shows up in August and practically takes over the joint, producing nineteen cartoons by the end of the year. Jane Reed (JR) produces a spate of seven panels between August and November, and is never seen here again after that. 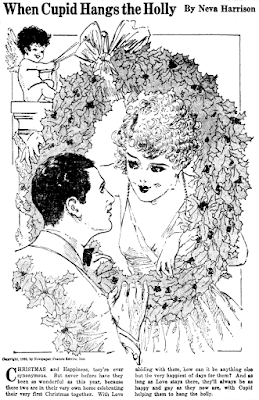 Madge Geyer (MG) returns for a single panel in December. We'll be seeing her on rare occasions for years. We also have a single appearance from "Carson" (C), also seen once in the previous year. Neva Harrison (NH) makes a single appearance in December. Harrison apparently started her newspaper art career on the St. Louis Star, and illustrated the children's stories for the NFS daily magazine page for several years. She seems to have abruptly left newspaper life in 1926. 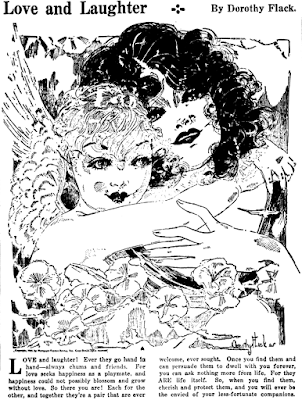 Dorothy Flack (DF), an artist who will be very important to the panel later on makes her debut with four cartoons in November-December. She had earlier produced the same sort of cartoons under the King Features banner, in a series for which I cannot find a good source.