Donald “Don” Komisarow was born on April 14, 1914, in Fort Wayne, Indiana, according to his birth certificate at Ancestry.com. His parents were Harry Komisarow and Mary Schefman.

In the 1920 U.S. Federal Census Komisarow was in the household of his Russian-born maternal grandparents, Louis and Anna Schefman. His father, a Russian emigrant, and grandfather were salesmen for a commission house. His mother and grandmother were housewives. They resided in Fort Wayne at 911 Francis Street.

According to the 1930 census, Komisarow’s father, treasurer of a wholesale fruit company, was the head of the household which included a second son, Ralph, his in-laws and a servant. Their home was at 1614 Alabama Avenue in Fort Wayne.

Komisarow’s interest in cartooning was seen in his 1931 high school yearbook, The Legend. 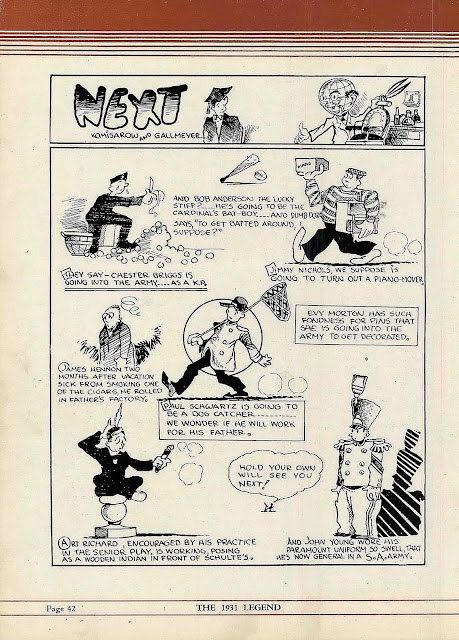 In 1932 Komisarow’s idea was used in Nick Nichols’ Just Supposin’. 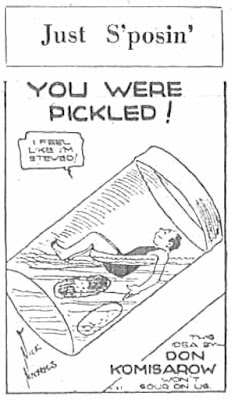 Komisarow graduated from North Side High School in 1932. He provided some of the illustrations for the yearbook, The Legend. The art was signed with his initials or last name. 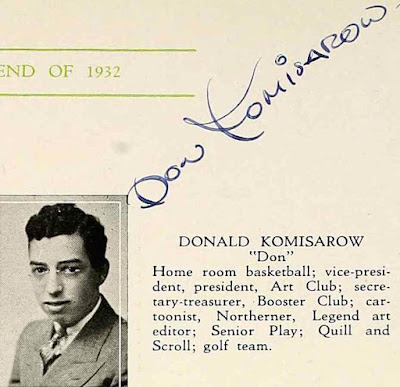 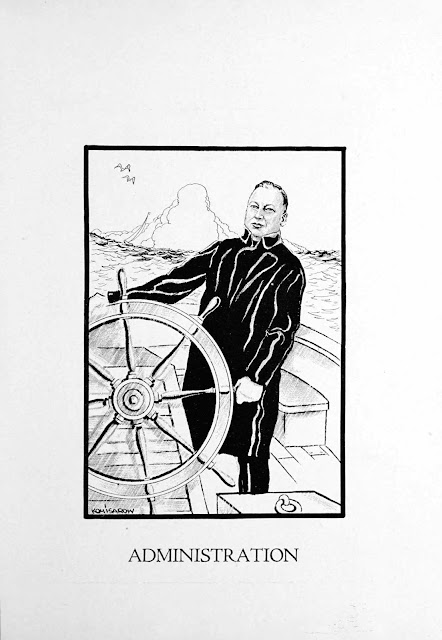 Komisarow had no listing in the 1935 Fort Wayne directory. He had moved to New York City and found work at King Features Syndicate. American Newspaper Comics (2012) said Komisarow drew the Story of Noah and Story of Jacob segments, in 1935, of the Bible Stories series which began in 1933 with Dan Smith.

Komisarow was a regular contributor to the King Features Women’s Magazine Page from 1935 to 1937. 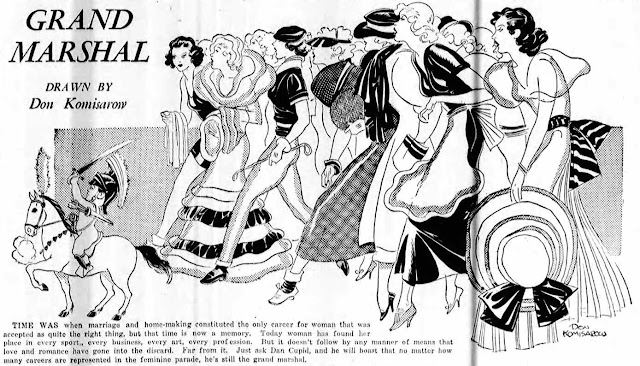 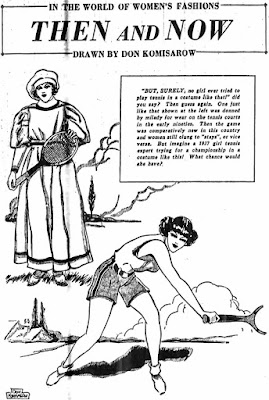 The Newspaper Feature Service produced a long-running series of romantic cartoons, by several artists, beginning in 1913. Komisarow contributed to the series from 1935 to 1937.

Komisarow was listed in the 1939 Fort Wayne directory at his parents’ address, 4502 South Wayne.

Komisarow was not in the 1940 Fort Wayne directory and has not yet been found in the 1940 census.

The Lyons Den column of the New York Post, March 18, 1941, said “Don Komisarow, the cartoonist, and Artie Shaw, the bandleader, have created a cartoon strip about an orchestra leader. The syndicates now are bidding for it.”

In 1943 Komisarow produced the Book-of-the-Month’s Thirty Seconds Over Tokyo adaptation for King Features. The strips were collected in a comic book, American Library #1. Around this time he was an inker at the Will Eisner Studio.

Komisarow was a contract bridge player.

According to the 1945 Manhattan, New York City directory, Komisarow had a studio at 11 West 42nd Street and resided at 300 West 72nd Street. Also living with him was his brother, Ralph, a commercial artist with lettering experience in comic books. A post at Today’s Inspiration said Komisarow and Lou Fine had a partnership producing advertising comics. In 1946 Komisarow and Fine used the pen name, Donlou, on the Thropp Family comics for Liberty Magazine.

A 1956 issue of Art Direction published an article about self-employed artists having to pay business taxes in New York state and said in part:


The New York State Tax Commission has handed down a decision holding that Don and Ralph Komisarow, commercial artists operating as a partnership, were not liable for the Unincorporated Business Tax. The Commissioners found that they were engaged in the practice of a profession and not conducting a business. Efforts on the part of artists in New York state to win professional status recognition have previously been unsuccessful.


TV Channels, a four-color, rotogravure weekly magazine to be carried by selected newspapers on an exclusive market area basis, will be issued for the first time next June 1.

… Donald Komisarow, the publisher, was for nearly 14 years with Hearst Newspapers and also served with INS, the Chicago Tribune, Chicago Daily News, Miami (Fla.) Herald and United Features Syndicate. Since 1944, he has had his own office, specializing in comic advertising for ad agencies.

Komisarow had listings in the 1960 and 1964 Who’s Who in Commercial Art and Photography: A Guide to Artists, Photographers, Agents and Studios in the Graphics Field.

In 1968 Komisarow illustrated Albert Miller’s Captain Whopper. Books in Print Supplement, Volume 2 (1977) published a description of the book, “A salty old sea captain runs a taut ship on a parkbench where a young and ever-growing crew sail the rollicking seas of the imagination with him.” Later in 1968, More Captain Whopper Tales was published with art by Komisarow.

The New York Times, November 25, 1979, reported the engagement of Ellen Robin Kaufer to Komisarow’s son, Joel Harris. The Times said Joel, “an alumnus of Indiana University, is with HDC Publications, New York trade magazine publishers. His father, a partner in HDC, was formerly a cartoonist for King Features.” Komisarow was a Beechhurst, Queens, New York resident.

Komisarow passed away on March 14, 2000, in New York. The Social Security Death Index said his last residence was Long Beach, New York. He was laid to rest at Mount Ararat Cemetery.