Louis F. “Lou” Darvas was born on July 30, 1913, in Hungary. His birth date is from the Social Security Death Index, Ohio death certificate (transcribed at Ancestry.com) and World War II veterans death file. Darvas’ army enlistment record said he was born in Hungary. Hungary was also recorded in the 1930 and 1940 U.S. Federal Censuses. However, his Ohio County Naturalization Record (at Ancestry.com) said he was born in Yugoslavia. Darvas’ obituary in the Cleveland Plain Dealer said, erroneously, he was born in Cleveland.

In the 1920 census, the Darvas family were Cleveland residents at 2035 West 26th Street. Darvas’ father was an inspector at a drill factory.

An early sign of Darvas’ talent was reported in the Cleveland Plain Dealer, April 22, 1928, magazine section which announced the winners of Seckatary Hawkins Club baseball contest. Darvas received a third place dollar prize for his drawing.

According to the 1930 census, the Darvas family emigrated in 1913. Their address was unchanged. Darvas’ father was a real estate salesman.

He enrolled in night art classes at the old John Huntington Institute. His day job was scarping off old signs for an advertising firm.

Mr. Darvas’ first newspaper job was as an artist with the old Toledo News-Bee. He returned to Cleveland and started with the Press in 1938.


In 1935 Darvas created a cartoon panel, Petey, for the Thompson Service but it’s not known if the panel was ever published.

The 1940 census recorded the couple in Cleveland at 410 10017 Lake Avenue. Darvas was an editorial artist.

During World War II, Darvas enlisted in the Army on March 29, 1943. The Cleveland Plain Dealer said he was assigned to the Army Air Forces where he “won first place for cartoons in the art show of the Army Air Forces Tactical Center at Orlando, Fla., in 1944.” Darvas headed the drafting and art room of the senior staff school where “he supervised charts and graphs for secret air force statistical records.” Darvas was discharged December 10, 1945.

“Sgt. Louis F. Darvas” was counted in the 1945 Florida state census. He resided at 63 Cheney Place in Orlando.

On December 24, 1945, the Chicago Sun began advertising Darvas’ new strip, Haff Nelson, which was scheduled for a December 31, debut. 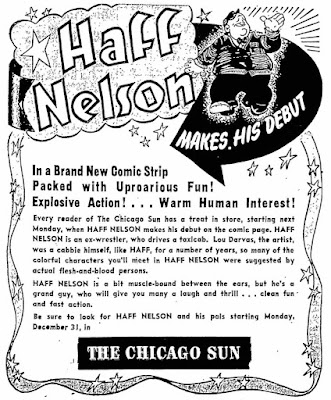 The Cleveland Plain Dealer said Darvas was a regular contributor to the Sporting News.

During the 1950s, Darvas was listed in Lakewood, Ohio city directories at 477 Elbur Avenue.

Darvas appeared in the 1951 Holy Name High School yearbook Namer. The caption read: “Senior Jack O’Brien, editor of the Name, learns from Bill Roberts, left, and Lou Darvas, right, how to put the professional touch on his cartoons at the Press.” 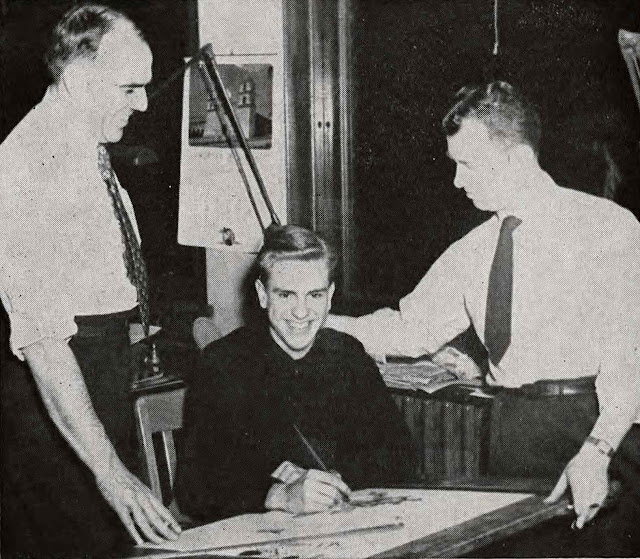 Darvas’ book, You Can Draw Cartoons, was first published in 1960.

The Cleveland Plain Dealer said Darvas received the National Cartoonists Society award for best sports work in 1964 and 1968. He retired from the Cleveland Press in 1974. In 1986 Darvas was inducted into the Hall of Fame of the Sports Media Association of Cleveland.

Darvas passed away February 9, 1987, at the Mount Royal Villa nursing home in North Royalton, Ohio, according the Cleveland Plain Dealer. He was laid to rest at Lakewood Park Cemetery.