Obscurity of the Day: Idea Payoff 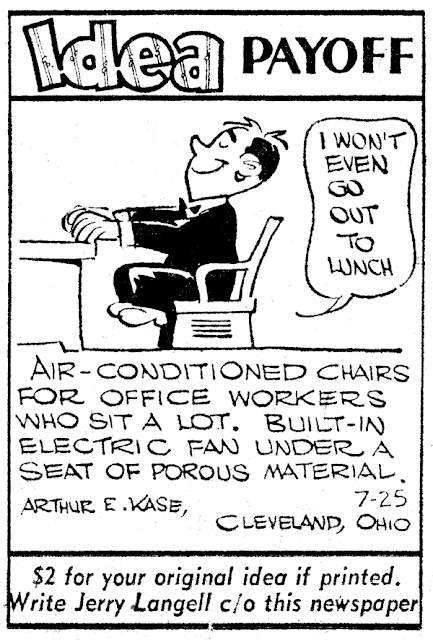 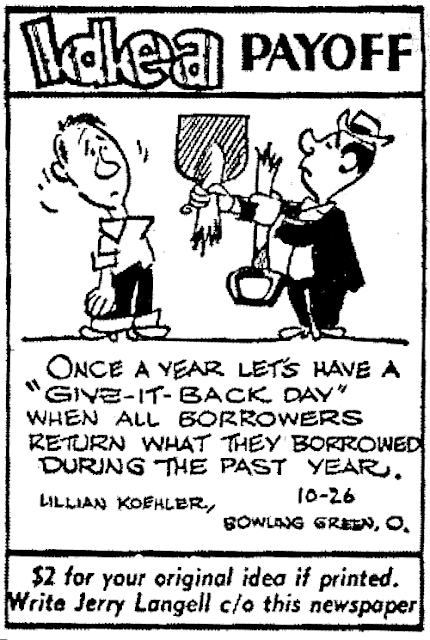 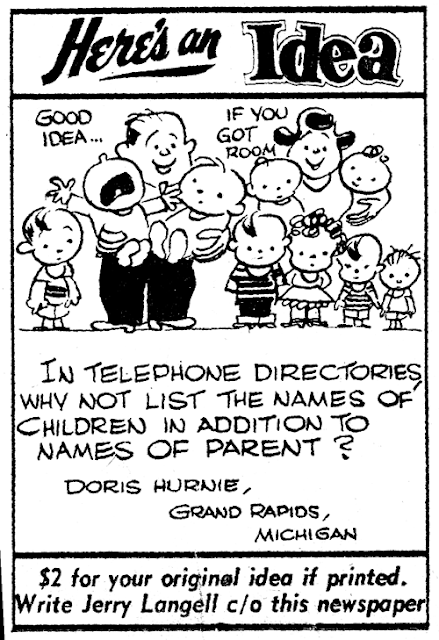 With such a plethora of obscure features down at the bottom end of Jeffrey Lindenblatt's 1977 newspaper comics index, I had lots of research topics on which to follow up. Among them is a feature that ran for over forty years and in the process spawned two syndicates. If that seems like a feature that wouldn't be obscure, think again.

Jerry Langell came up with a pretty good idea for a feature in 1948. He'd ask readers to come up with ideas for new inventions, pay them $2 for those he used, and have a cartoonist illustrate them. The creative work was all done for him, and the heart of the gimmick was that he'd alert newspapers when one of their reader's ideas is used so that they can hype it with an article -- newspapers love that sort of "local person cashes in on reading our paper" stuff.

To me this seems like a pretty brilliant idea, but Langell couldn't seem to sell it to one of the big syndicates. Or maybe he thought it was such a flash of brilliance that he didn't want to share the forthcoming treasure with anyone. At any rate, Langell created a new company called Editors Syndicate (which conveniently is a very similar name to a few other reputable firms), and proceeded to market his little one-column panel baby, Idea Payoff. He did attract a modest number of high-profile clients, like the Pittsburgh Post-Gazette which was on hand for the panel's debut on April 5 1948, but the feature really didn't end up taking the world by storm.

Although the art on Idea Payoff was never signed, Langell was willing to give credit, at least in the E&P listings. Lou Darvas was primarily a sports cartoonist who once got a cup of coffee in the strip world with the short-lived feature Haff Nelson. Darvas was credited through 1963, after which no artist was credited. Since the art style never changes, I'm guessing that Darvas may have stayed on but preferred anonimity on this side-job.

For some reason Langell decided in August 1957 to create a new syndication company name for Idea Payoff. Editors Syndicate was dumped, and Allied Feature Syndicate was born. In another unexplained change, the next year he started offering his feature under two different names -- the original, and Here's An Idea. The panel was identical save for the name. In the early 1960s, Langell began to take on additional features, making him a bona fide syndicate with a list of half a dozen or so offerings.

In yet another mysterious change, in 1968 Langell changed the name Idea Payoff to Idea Chaser, while still offering it as well under the alternate title Here's An Idea. Then in 1971 the Here's An Idea title was officially dropped for the E&P listings, but it can still be found in subscribing papers much later.

I wouldn't be surprised if by the mid-1970s the panel was being recycled, because the art was now looking seriously out of step with the times. However, Langell was still able to attract clients. The last paper I can find using the feature is the Indianapolis News, which ran it sporadically as late as 1985. The feature was last offered in E&P in 1989.