Obscurity of the Day: The History Of Marriage 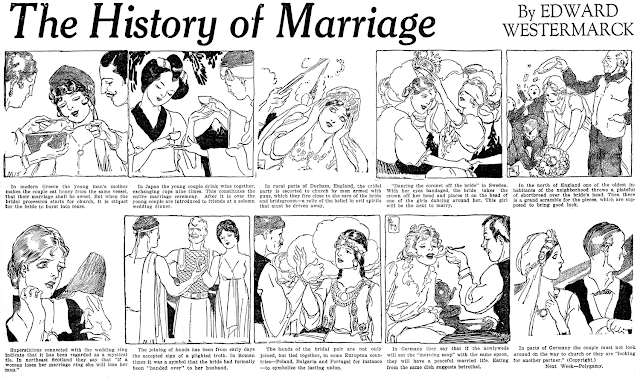 In 1927 King Features produced a short-run daily strip that cherry-picked odd and unusual facts about marriage from a recently published book titled A Short History of Marriage by Edward Westermarck. The strip ran from July 12 to August 6 in the San Francisco Examiner, and ran in some client papers as a weekly (as shown above, using two strips per weekly episode).

The strip seemed to end rather abruptly after that that three week run. Perhaps they were out of material, or perhaps there was enough blowback from clients over the contents of the strip that they dumped it. Alexander Popini, freed from his usual job of drawing chaste romance cartoons, was having a field day depicting bare-breasted native girls in the last few installments, and maybe he went too far. Here's the final installment: