Obscurity of the Day: Laughs From Europe 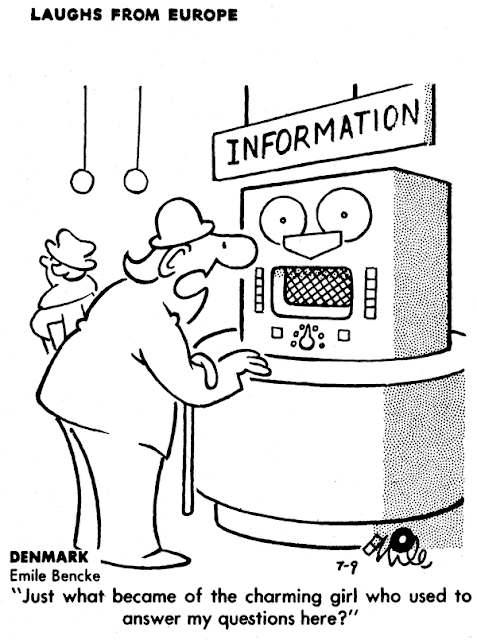 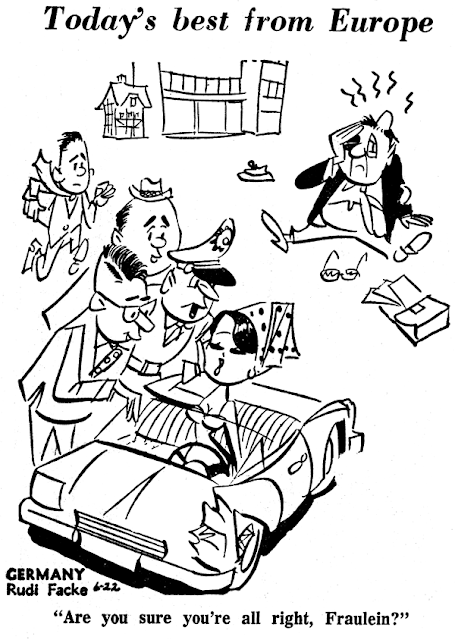 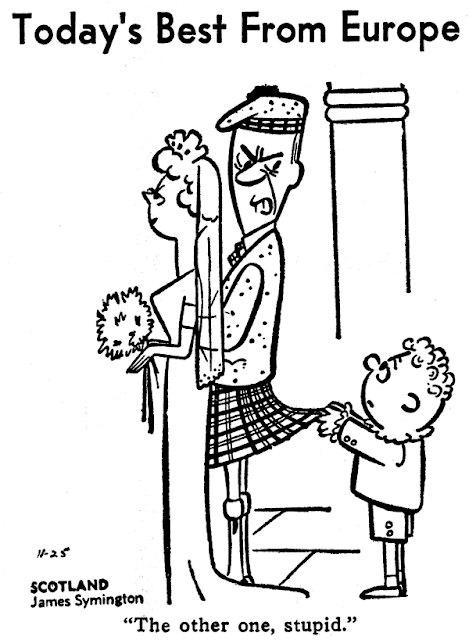 Here's another obscurity plucked from the 'one-paper wonders' in Jeffrey Lindenblatt's The 300 for 1977.

In 1958, Iowa's Register & Tribune Syndicate decided that what American newspapers really needed was a shot of urbane sophisticated European humor. They stepped up to the plate by offering Laughs From Europe, a daily panel offering gag cartoons from all over (western) Europe. How they chose these cartoons, and where they had originally appeared in Europe I'm afraid I don't know, but I'm going to bet that R&T got them very cheap, because they offered these daily cartoons for well over two decades to a very small list of subscribing newspapers.

The feature was originally titled Laughter From Europe when it debuted on March 3 1958, but right from the start it had an identity crisis when some subscribing papers slightly shortened the title to Laughs From Europe. In 1960 for some reason the syndicate decided that the feature should be renamed Today's Best From Europe. In 1964 they succumbed to peer pressure and from then on it was officially Laughs From Europe, but of course subscribing papers were now locked into their titles and you'll see all these titles and probably others throughout the life of the feature.

The feature was hobbled, in my opinion, by the pedestrian quality of most cartoons -- if these were truly the best that Europe could offer, I feel sorry for the health of their funnybones over there. The other problem is that the translations of many cartoons seemed totally tone-deaf to humor. There is an art to writing an effective gag line, and the translators seemed not to get that, making potentially funny gags into real klunkers.

In 1977 Register & Tribune seemingly decided they'd offered all the best of Europe that Americans could stand, and they stopped advertising the feature in Editor & Publisher after that year. However, it seems like they must have continued offering it in international syndication until at least 1982, because I find it running in the Calgary Herald that late.

Any information you can offer regarding the nuts and bolts of choosing cartoons for this feature would be of great interest to me.

Comments:
Were subscribing papers really locked into using the title that the feature had when they originally subscribed? Or was that meant as a joke?

They weren't locked in, they are generally just too inattentive to change their title bars when the name of a feature changes. So old titles go on for years and years. Same for columnist photos -- Dear Abby's picture looked like she was about 35 in my paper when in reality she was in her 70s.