Obscurity of the Day: Mazie the Motor Maid 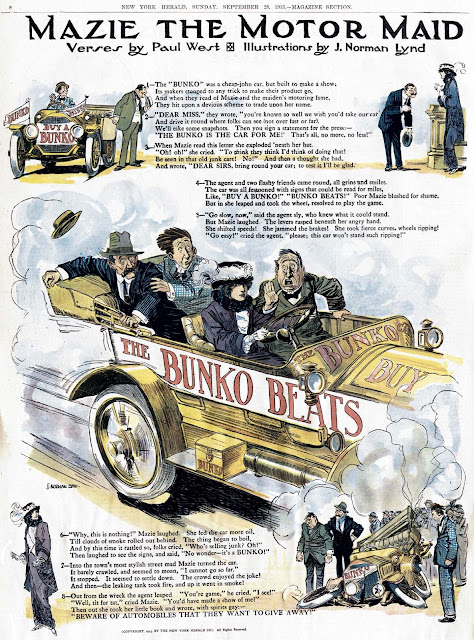 Let's ring out 2019 with a superb series, one that marks the debut of the great J. Norman Lynd as a newspaper series cartoonist. Lynd was a jack of all trades at the New York Herald, starting there sometime around 1910. When I think of all the years he spent there NOT producing great cartoons it makes me a little ill. What a criminal waste of talent.

Anyway, Mazie the Motor Maid is in the style of a magazine cover series, and concerns a beautiful gal who is an expert car driver ... believe it or not that would have been considered pretty noteworthy in that era. Paul West provides the doggerel verse, which manages here not to be nearly as grating on the nerves as usual.

Mazie the Motor Maid ran in the Herald from June 15 1913 until March 15 1914. For some reason the final installment was demoted to a little 3-column black-and-white rather than the glorious full-pagers of the rest of the series. The series went on long enough that Paul West must have run out of ideas about automobiling, because the last three episodes were titled simple Mazie and the subject went afield form motorcars.

After this series Lynd would not do another series cartoon until 1919's You Know How It Is.