This week Heritage Auctions is putting up for bid some interesting and unusual original art from my collection. As I've said before, if you are a Stripper's Guide reader and see something you like, I'm not too proud to ask that you bid maybe just a little bit extra as a vote of thanks for this ad-free non-commercial website. You can see all my auctions live on Heritage by following this link. 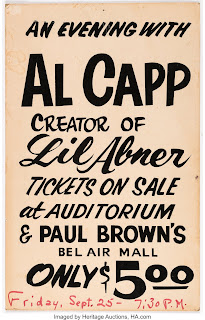 First up we have this rare survivor, an original hand-lettered show card from one of Al Capp's infamous personal appearances at which he hurled invective at hippies, liberals and non-conformists. Whether you love the younger more liberal Al Capp or the older arch-conservative, this is quite an amazing souvenir of Al Capp's tumultuous life. 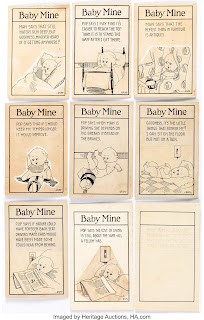 Next up we have a group of 8 original art panels from the 1920s Baby Mine series by Paul Pim. These are fun little cartoons, and show how Pim managed to cut his work load significantly through the use of stats (note that the bottom two pieces are the same except for some details). A neat bonus is panel #9 which has Pim's pencil lettered caption, but no art has yet been applied. Hey, try creating your own Baby Mine panel! 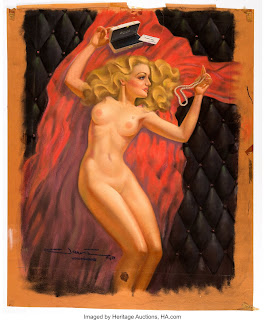 Hey, now we're talkin'! This incredible large pastel by Jarvis depicts a bodacious blonde in her birthday suit. She's just received a pearl necklace from a suitor, and I'm not really sure if she's pleased or not. Sort of a Mona Lisa smile going on there. This piece is a little ragged around the edges, but trust me that it mattes up just beautifully. I supplied it to Heritage with the matte, but I don't see it mentioned. There is also a tiny blind tear right in the middle, but it's not too noticeable. If you are the lucky winner, fair warning that as with any pastel like this, handle with care. 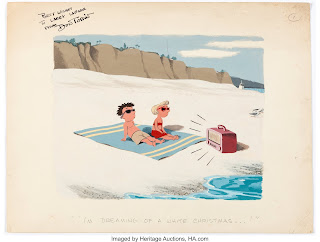 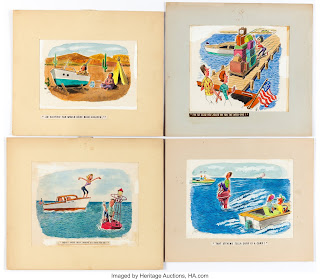 Here are five delightful color cartoons dedicated to summer seaside fun. At the top we have a Don Tobin gag cartoon, and believe me when I say that the watercolor work on this is just beyond description. This is definitely one you want hanging on the wall. When I lived in Florida this one was prominently displayed in my home.

The other four are about boating (evidently for some boat publication) and are signed "Landi", but Heritage and I agree that this can only be Frank Interlandi, here working under a highly transparent pseudonym. 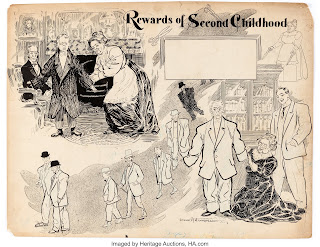 Finally we have a classic piece of Puck magazine art by Frank Nankivell depicting in a series of vignettes our journey from childhood to second childhood. All of life boiled down into one gag. This is a very large piece and displays really well.

Comments:
The Interlandi attributed artwork is most likely by Frank’s brother Phil. Frank's style is quite different. 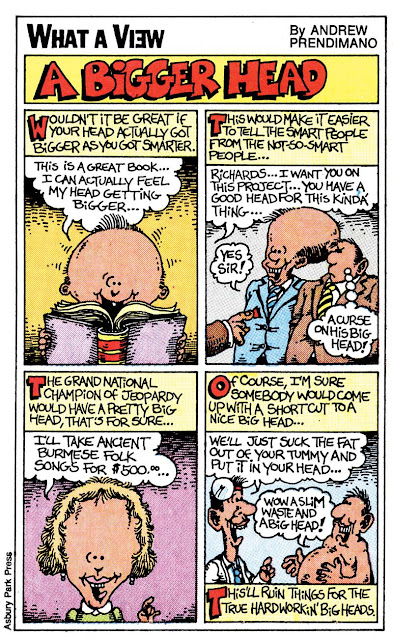 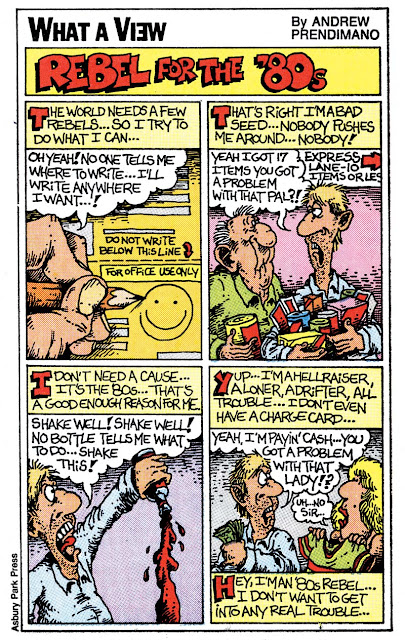 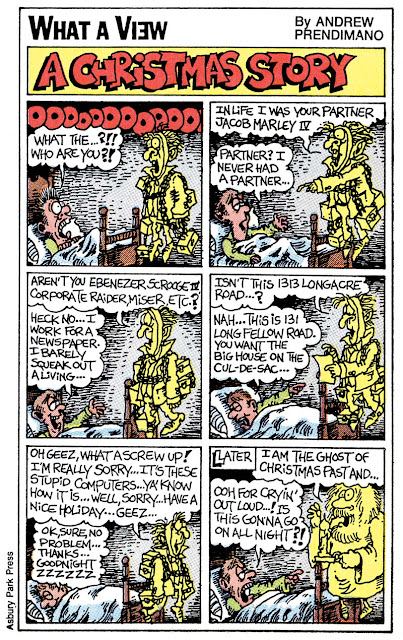 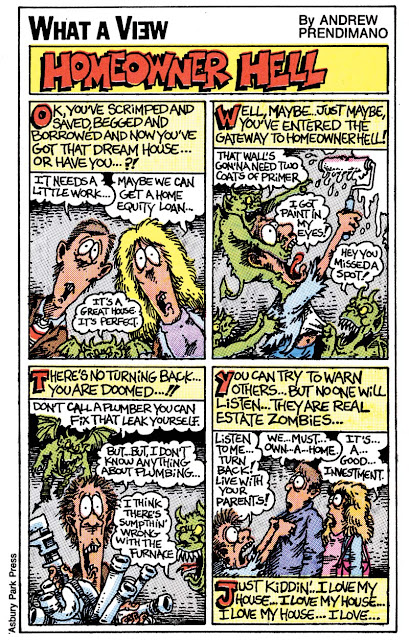 Obscurity of the Day: Dillon

Steve Dickenson decided at an early age that he was destined to be a syndicated comic strip creator, and he began working toward that goal after he got out of the Navy in 1980. Many submissions later, he finally got a few syndicates interested in Dillon, a strip about a 6-year old kid. Tribune Media Services signed him and he worked with editor Evelyn Smith for over a year at turning the submission into a strip they were willing to solicit. In my opinion, what they came up with was way too self-consciously sassy, with kids behaving and talking in ways that serve only the gag, and are completely inappropriate and out of character for their ages. But this was still the '80s, and I guess you could get away with 'hip' kids written with that awful sitcom sensibility of the day (think Diff'rent Strokes, Family Ties, and all those dozens of others that TV watchers endured back then).

The daily and Sunday strip was supposedly picked up by about 70 papers according to a promotional article, and debuted on January 9 1989*. The strip didn't exhibit any particular growth during its run except that Dickenson's art improved along the way. The gags remained firmly dependent on that annoying precocious child syndrome. Dickenson and the syndicate finally gave up and the strip ended on June 28 1992**. That end date is for the Sunday; I believe the daily probably ended a few weeks earlier.

Steve Dickenson learned from his experience on Dillon (perhaps to not take the opinions of syndicate editors as gospel) and he tried again with Tar Pit, which I liked but didn't catch on. Finally he hit paydirt in 1999 teamed with Todd Clark on Lola, which is now embarking on its third decade in syndication, though Dickenson bowed out in 2008.

PS: Dickenson is credited with two more syndicated strips -- My Brother's Keeper and Retro Geek. Unfortunately I can only find either these appearing in newspaper reader's choice contests (which they apparently didn't win). Can anyone tell me of newspapers that ran these as regular features?

Comments:
Retro Geek appeared as a temporary replacement for Candorville in the Detroit Free Press in 2008:

And as a tryout in the Casper Star-Tribune in 2007: 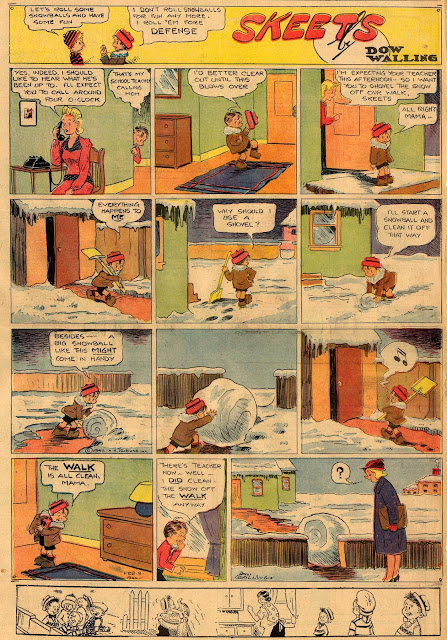 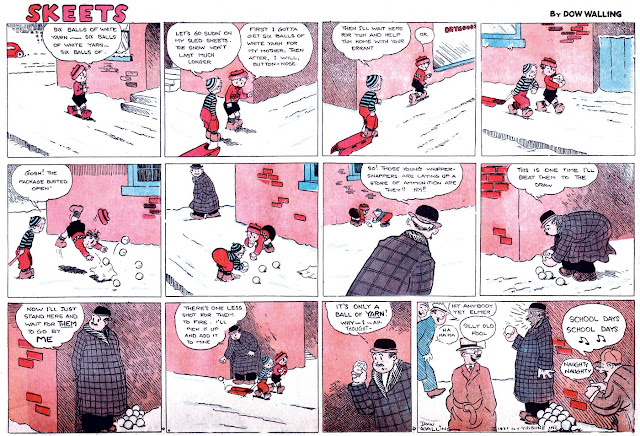 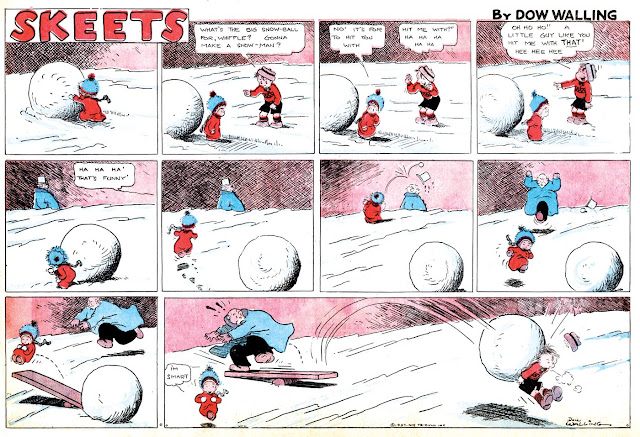 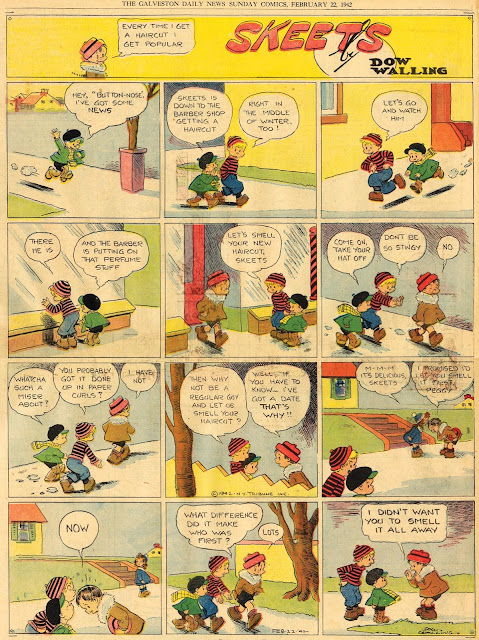