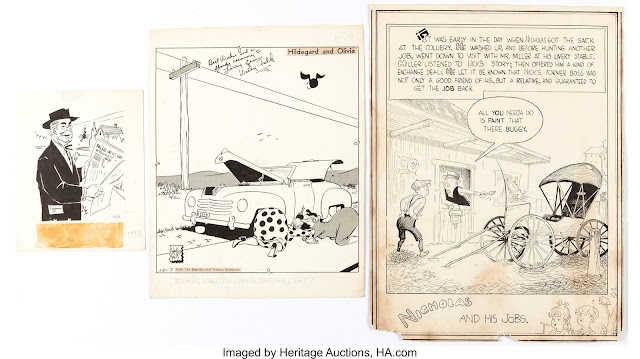 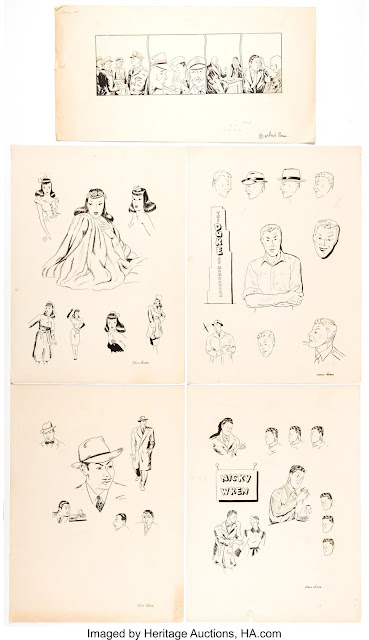 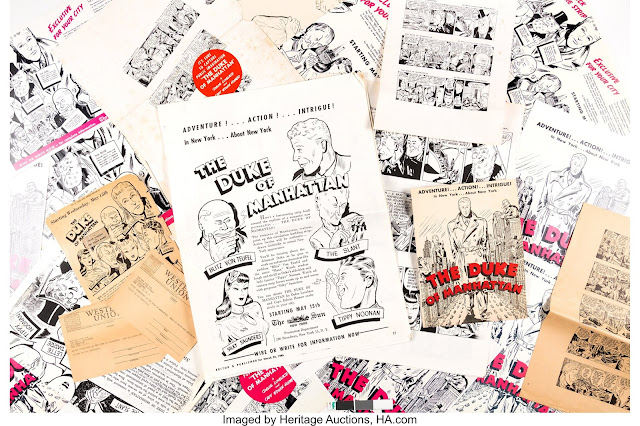 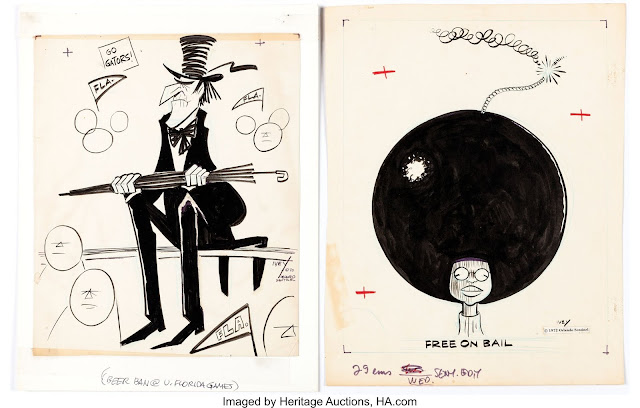 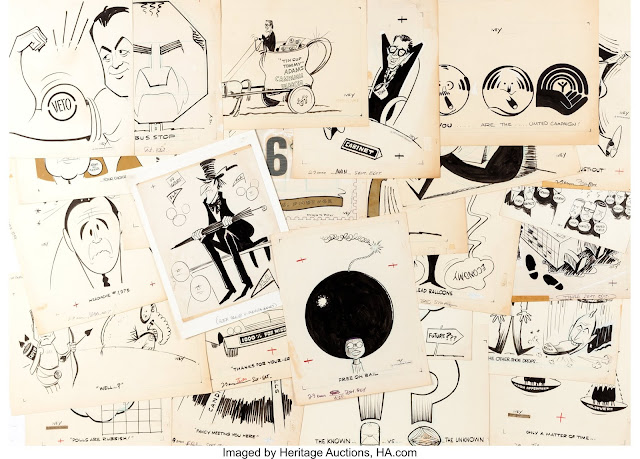 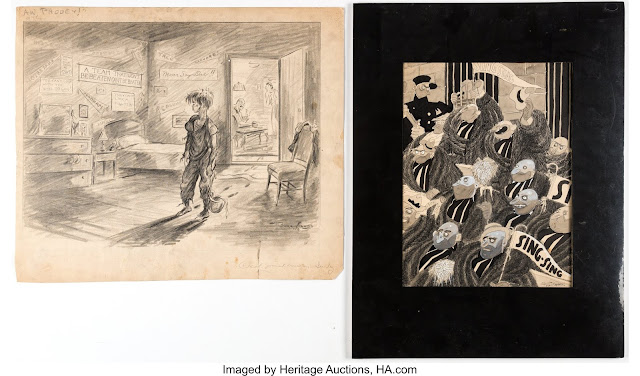 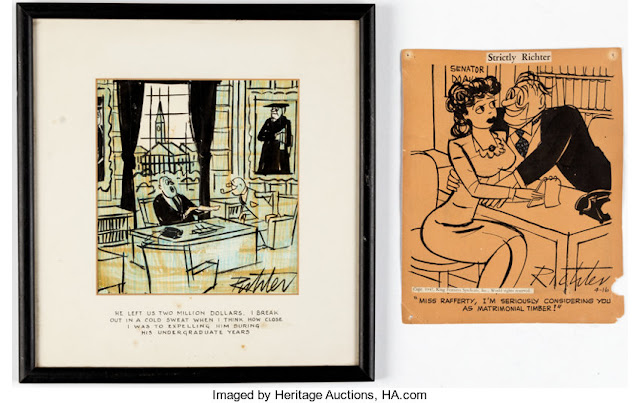 Obscurity of the Day: Unsophisticated Oscar

Today we look at Unsophisticated Oscar, which is both an obscurity and a mystery.

The creator of the strip, who went only by 'Gregory' or 'Greg', had real potential as a cartoonist, but he got himself a syndicated daily strip when he was several Landon lessons short of being competent. His gag ideas were usually pretty standard stuff, but they were executed with a real sense of fun. If his drawing was better the strip could have been worth readers' time.

The earliest I can find Unsophisticated Oscar is in the Taunton Gazette in August 1913. The strip was a seven-column daily, with a text drop column bringing up the rear. The strip carried no syndicate stamp but appeared in a smattering of newspapers all over the country, so it was most likely not a self-syndication effort (which I would expect to have a more regional subscribership).

As 'Gregory' faced the dreaded deadline doom day after day his artwork improved over time, and when the  the strip ended on April 4 1914* it was starting to look downright respectable. In fact, 'Gregory' had improved so much that he had a comic strip called Curiosity accepted by the New York Evening World. Unfortunately it only managed a two week run before it was dumped. Greg then got a weekly strip into the New York Herald, but it only lasted about four months. After that he falls off my radar. 'Greg' continued to be seen in newspapers until well into 1915, but that was only because the anonymous syndicator of Unsophisticated Oscar sold the strip in reprints at least that long.

Our two mysteries today are the ID of 'Gregory', which is a tough nut to crack, but also the identity of the syndicate that distributed Unsophisticated Oscar. I can usually take an educated guess at a syndicate based on the tyesetting of the strip title and from other strips that appear with it in the same papers.

In the case of this strip, there is only one clue: it is the same syndicate that also distributed Milt Gross' Mr. Henry Peck. Their formats are identical, and they appear in many of the same papers. Unfortunately, the syndicate of Gross' strip is also unknown.

Comments:
Whatever syndicate this is, they liked the add-on "Trash panel" at the end, or sometimes the beginning. This syndicate's clients seem to be only small town papers. One of their features was the second hand run of Charley Chaplin's Comic Capers, which of course was a Keeley strip the first time around. Could I leap to the conclusion that this is the earliest version of Autocaster or W.N.U.?

I can't jump with you on the WNU/Autocaster idea, though I can see a logic of it. If it was one of them, wouldn't we probably also be looking at very similar 'patent insides' to these papers in all likelihood?

Obscurity of the Day: 408 Maple Street 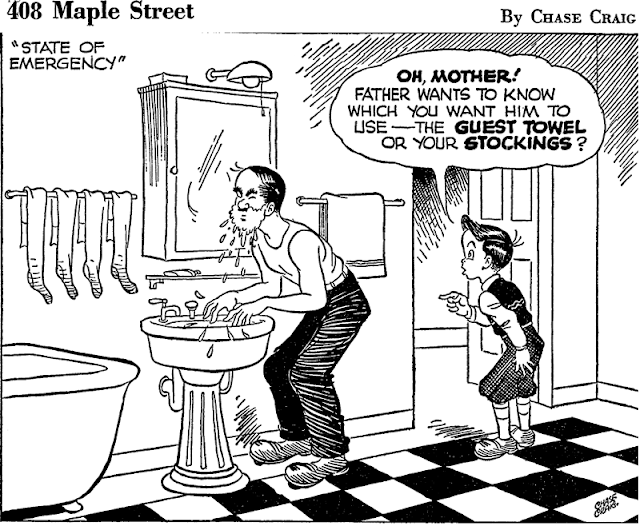 408 Maple Street was a gag panel printed sporadically in the Christian Science Monitor. The creator, Chase Craig, did quite a bit of cartooning work for that paper in the 1930s and early 40's, but he rarely stuck with any one thing for long. This series was his shortest, running from May 5 to July 21 1941.

This keyhole view of family life was one of Craig's better outings in my opinion, so it's a shame he didn't stick with it longer. I get the feeling that the Monitor didn't pay very well and he only produced work for them when he had no better outlet for his work. He may even have done his Monitor work as a donation to the organization, as I get the impression that wasn't uncommon.


Woodard Prentice Phillips was born on May 15, 1894, in Plainfield, Connecticut according to his World War I and II draft cards. Both cards had his full name. Something About the Author, Volume 10 (1976) said Warren Winfield, a farmer, and Flora Bertha Card, were his parents.

In the 1900 United States Federal Census, Prentice lived with his maternal grandmother, Mary Card, the head of the household and widow, and his father, a widower. Both were farmers in Plainfield. Their situation was unchanged in the 1910 census.

Prentice signed his World War I draft card June 5, 1917. He was self-employed doing advertising publicity. According to the Norwich Bulletin, August 7, 1917, Prentice passed the physical examination. The Norwich Bulletin, October 29, 1917, said Prentice was a member of the National Army at Camp Devens.

Something About the Author said Prentice married Loretta Hosey on December 23, 1917. She was born on April 17, 1893, in Southbridge, Massachusetts. According to the Massachusetts Birth Records at Ancestry.com, her name was registered as “Catharine L Hosey”. Her parents were William Joseph, a building contractor, and Katherine Dempsey. In the 1900 census the family of five resided in Norwich, Connecticut. The 1910 census recorded the quintet in Canterbury, Connecticut. After finishing her education in public schools, Loretta studied at the Norwich Art School in Connecticut. It’s unclear where Loretta made her home while Prentice was away.

Prentice was stationed in Europe for a period of time. On June 5, 1919 he departed St. Nazaire, France and arrived June 13, in Boston. Prentice was a private first class in Company E 301st Engineers.

The 1920 census said artist Prentice and Loretta, a wire mill inspector, lived with her mother, a widow, in Worcester, Massachusetts at 6 Florence Street. Also in the household were Loretta’s two sisters and a niece.

During the 1920s, Prentice was listed in the Worcester city directories as an artist residing at 6 Florence. The same information appeared in the New England Business Directory and Gazetteer for 1922.

Prentice provided the borders for the 1925 book, Brownie the Engineer of Beaver Brook. In 1929 Prentice illustrated Patty Pans: A Cook Book for Beginners.

In the 1930 census, Loretta, a fashion illustrator, and Prentice, a book illustrator, continued to live with her mother at the same address. Both illustrators were self-employed.

In the early 1930s I believe Prentice joined the Worcester Telegram-Gazette newspaper. He was listed in the 1932 International Year Book Number.

American Newspaper Comics (2012) said Prentice self-syndicated Exploring the World with Carveth Wells, which ran from October 30, 1933 to May 17, 1934.

The 1939 city directory listed Prentice as a commercial artist.

The Phillips have not yet been found in the 1940 census. Prentice signed his World War II draft card on April 27, 1942. His address was the same and he worked at the Heald Machine Company in Worcester.

Something About the Author said


The Phillips’ also are creators of a panel feature, “They Made the Headlines,” which has been running on alternate weeks in Worcester Sunday Telegram for twenty years, and contributors of other illustrated features to Boston daily and Sunday newspapers, and to juvenile publications.

Throughout the 1950s the Phillips kept the same home in Worcester and occupation as illustrator or artist. The 1961 directory had Prentice as a cartoonist.

According to Something About the Author, the Phillips’ address, in 1976, was “1060 Main St., Apt. 317, Worcester, Mass. 01603”. Prentice’s career included “commercial artist, owner and operator of art studio ad advertising agency; free-lance writer and illustrator; former lecturer and teacher of cartooning and commercial art at Worcester Junior College, Worcester, Mass.”