December 23 1909 -- Herriman adds graphic interest to a news round-up on polar explorers, showing Cook's reputation melting like a snowman under scrutiny of his claims.

Wish You Were Here, probably from Norman Jennett 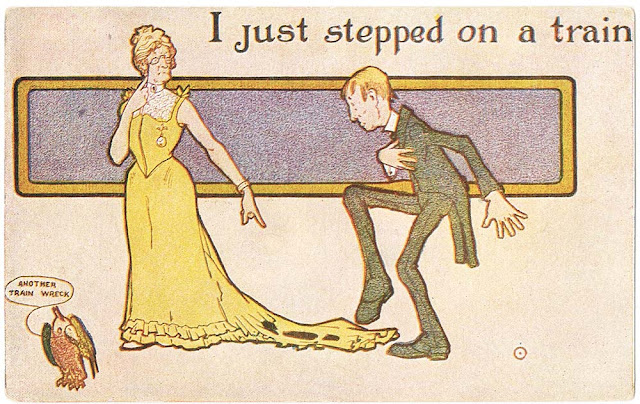 Here's another card that I think is by Norman Jennett. Each card in the series has the parrot and the 'signature' of a circle with a dot in it. The series was not copyrighted, and the reverse is pre-divided back, meaning 1906 or earlier. However, this card was postally used in 1910.

Obscurity of the Day: Hints to Society

Robert A Graef produced three series for the New York Herald -- The Leap Year Society for the Getting Back at Mere Man, Hints to Society and a third we've still not covered here on Stripper's Guide. At this rate, I calculate we'll cover that last one around 2026. Stay tuned!

Hints to Society was Graef's longest-running series for the Herald, appearing from August 21 1904 to May 21 1905*. In it he makes tongue-in-cheek etiquette suggestions for the upper crust. Above we see him addressing a problem in the automobile's brass era -- riders wore much-needed dust protection in these open vehicles, and therefore could not tell which other high society folk they were meeting. Adding an etched calling card on the all but useless windshields of these vehicles allowed members of the 400 to determine whether they should greet or high-hat those in the other cars. 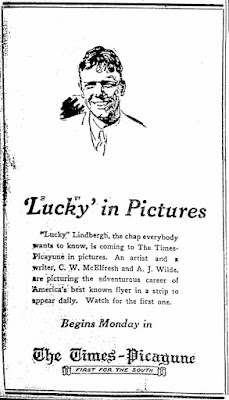 Obscurity of the Day: Charles A. Lindbergh's Life and Adventures

In the wake of Lindbergh's landmark flight across the Atlantic, every newspaper syndicate was in a race to supply the ravenous hunger for material about Lindy and his feat. The newspaper reading public could not be sated. However, as far as I know only one closed-end comic strip was created specifically to tell his life story, which I find quite surprising.

What is even more surprising is that it was syndicated by the North American Newspaper Alliance, which as far as I know never produced another comic strip in all their years in existence. NANA was a news-gathering organization, and they normally left this sort of thing to Bell Syndicate, which was aligned with them. I guess that shows the enormity of this news event and the desire to cover it every possible way.

NANA assigned writer A.J. Wilde and artist C.W. McElfresh to the task, and they produced a strip that ran from June 13 to July 23 1927* in lots of papers. It ran under the title Charles A. Lindbergh's Life and Adventures, or Colonel Lindbergh's Life and Adventures, depending on the paper. It was billed in promos as offering "fresh information ... and romantic and authentic facts about his ancestry" that will "throw fresh light on this world hero." Whether the strip did much of that is doubtful, but it did offer a decently well-rounded history of Lindbergh, his family, and of the race to fly solo across the Atlantic. Considering that the strip began running in papers a mere three weeks after Lindy touched down in Paris, Wilde and McElfresh can be forgiven for any roughness around the edges of their presentation, especially since this was an apparently one-time foray into the world of comic strips for both of them.

Obscurity of the Day: Katinka

Ken Kling would eventually hit paydirt with a horse-racing tip strip, Joe and Asbestos, but in the 1910s and early 20s he was looking under every rock for his ticket to fame and fortune. His quest led him to a lot of syndicates, big and small, but his closest brush with early success came with Pulitzer's Press Publishing, which syndicated Katinka.

The star of the strip was a new Swedish immigrant to America, an ungainly looking middle-aged cook and housemaid. Katinka seemed to settle right in, vying with the Gessits, her employers, for the crown of biggest wiseacre. A mild-mannered dopey cop named Ferdie added a love-interest for Katinka, and an additional opponent for her employers. That about sums up the regular cast. Kling kept things very earthy, with lots of lowbrow humor, put-downs, insults, and a dash of physical comedy to keep the drawing interesting. In an era when strips of this type were often adding continuities, Kling showed little interest in the concept.

The strip debuted on February 9 1920, and was syndicated to an unimpressive number of papers. However, it was apparently enough to please the powers that be, and therefore lasted until April 7 1923. On the final date Katinka was wired that she had inherited money and a husband back in Sweden, and she caught the next boat home.