January 4 1910 -- This is the final Mary's Home From College strip until it is revived for a short run in 1919. Herriman sends Mary off with a literal bang in a classic final strip.

BULLETIN: Herriman Saturday is going on a short hiatus. I have more of his Examiner cartoons waiting to be scanned, but my large-format scanner is unavailable until sometime this fall. Saturdays will become a  temporary home for a new weekly feature starting next week, which will move to another day once we have Herriman cartoons ready to go again. Tune in next week to see what we have for a new series! 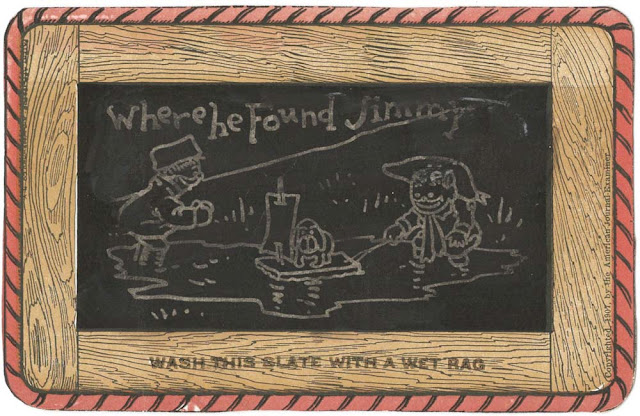 This is the first time we've featured a Magic Slate card on Wish You Were Here Friday. This series was a giveaway from the Hearst newspapers in 1907, and the gimmick was that the slate originally appears to be blank. The postcard recipient wets the slate and magically a chalky looking cartoon appears. This process was brand new, with a "patent applied for" note on each card citing the A.B. Woodward Company.

The only problem with this bit of hocus-pocus is that the drawings had to be very simple. On this card I would never know this was supposed to be Little Jimmy if it weren't for the caption.

These cards must have been in the printing pipeline for awhile, because they are undivided backs, which went out in 1906.

The above email address is to one of my old King Features Blog entries, where you can see another in this "slate" series, and some others in a similar vein.

Obscurity of the Day: Blue Chips

Morrie Brickman tried to make it big in a number of comic strip genres before finally hitting paydirt with the small society. Blue Chips was his last syndicated stop along the way, which was distributed by Bell Syndicate (later Bell-McClure) starting on October 3 1960*.

Blue Chips tried to carve out a niche market on newspaper stock pages, a page that has never really been the location of a big hit. Dale McFeatters' Strictly Business staked a claim, and later Herb Stansbury's Smart Charts, but generally speaking newspaper editors seem relieved enough just to get all that tiny type set for the stock listings and be done with the page. Adding graphic interest seems like it was pretty far down on their priority list.

Blue Chips may have further limited its chances of success by treating readers like they were savvy investors. Gags that depend on an understanding of dividends, stock splits and margin trading no doubt made for fun reading for experts, but the typical newspaper reader would have been mystified.

What Blue Chips did very, very right is to create a character, Mr. Pigeon, who was the put-upon everyman investor, constantly losing in the market and recognizing his luck is probably never going to change. This guy basically got rehired for a starring role in the small society, and once there, no longer complained about the stock market but rather the government and society. His fatalistic belief that things are awful and never going to get better struck a nerve with many people and made the strip the big hit it was.

the small society hit newspapers in May 1966, and Brickman soon knew he had a winner. He continued Blue Chips for a short while, probably working out his contract, and the strip seems to have expired on August 19 1967**.

Comments:
I found at least one "Blue Chips" strip where Pigeon said "Hoo Boy". The comparison to the "small society" guy is spot on. 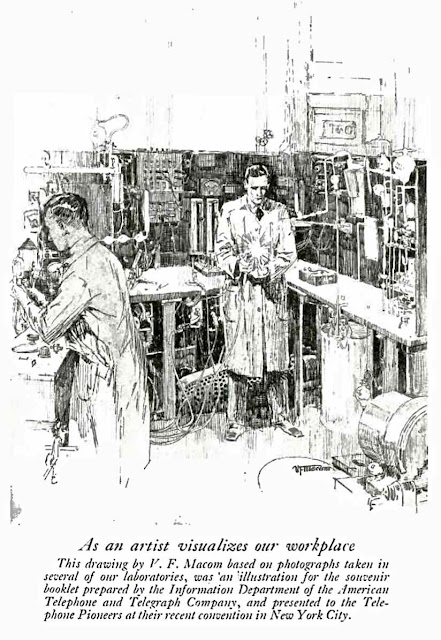 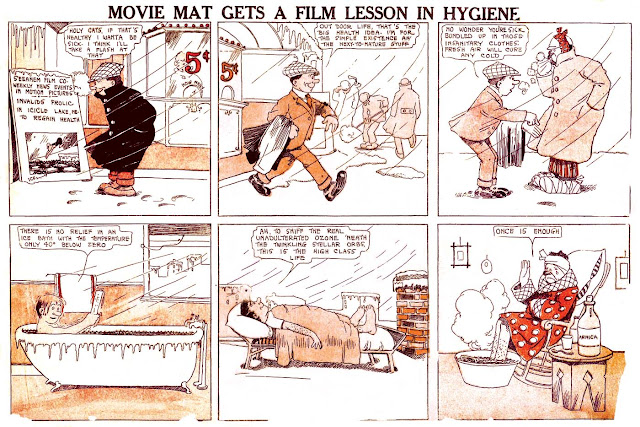 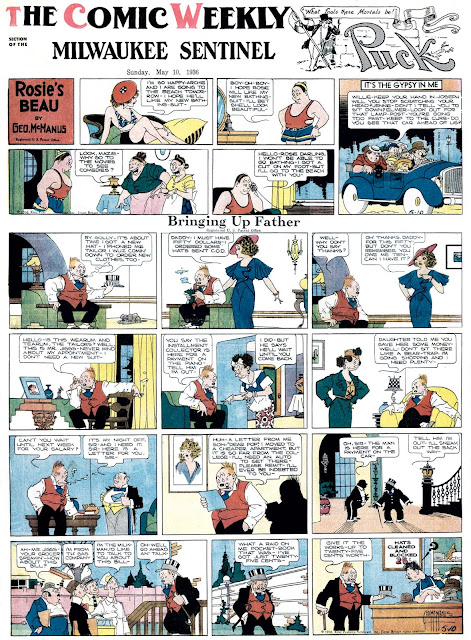