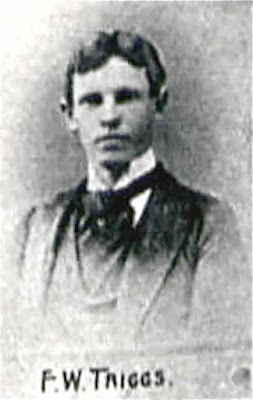 Flloyd Willding Triggs was born on March 1, 1869 or 1871 or 1872 in Winnebago, Illinois. Triggs’ gravestone has the year 1869. The Catalogue of the Phi Kappa Psi Fraternity had the birth year 1871. The American Art Annual (1913) had the year 1872. Most publications spelled Triggs’ first name with one L. A family tree at Ancestry.com said his parents were Matthew W. Triggs and Martha Jane Davis.

The 1875 Minnesota census said Triggs was the youngest of four children whose father was born in England. The family resided in Lodi, Mower County.

According to the 1885 Minnesota census, the Triggs were back in Lodi. Apparently Triggs finished high school there and continued his education at the University of Minnesota. Triggs graduated in 1893 and provided the illustrations for the school yearbook, The Gopher. The American Art Annual said Triggs studied at the Art Institute of Chicago. 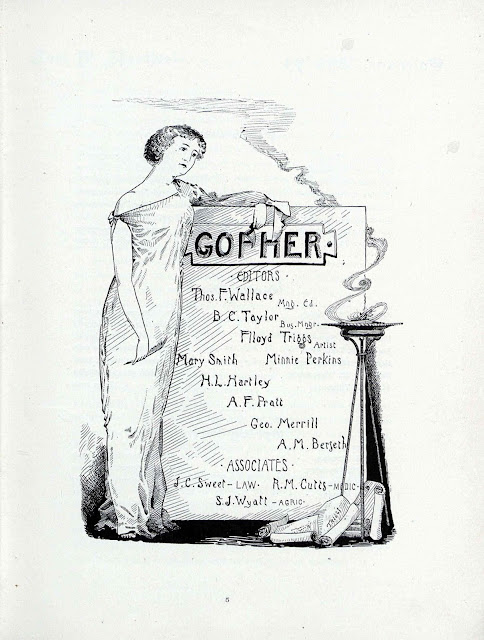 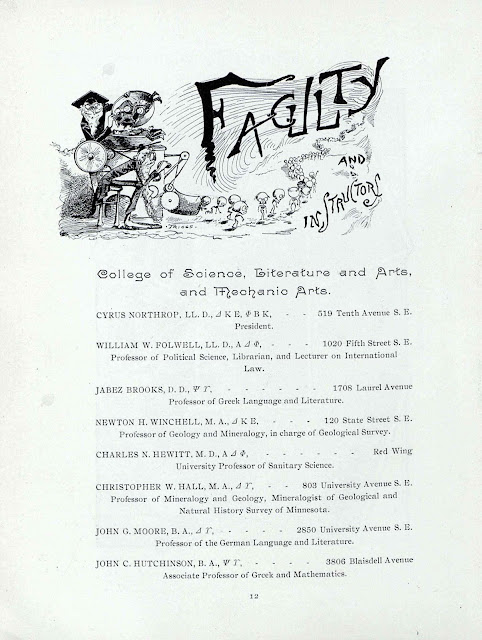 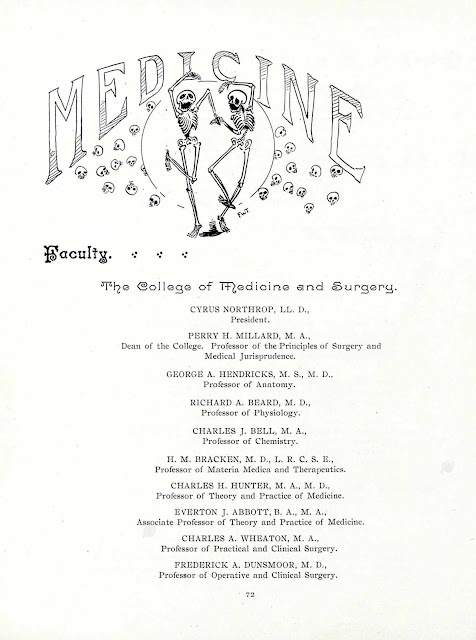 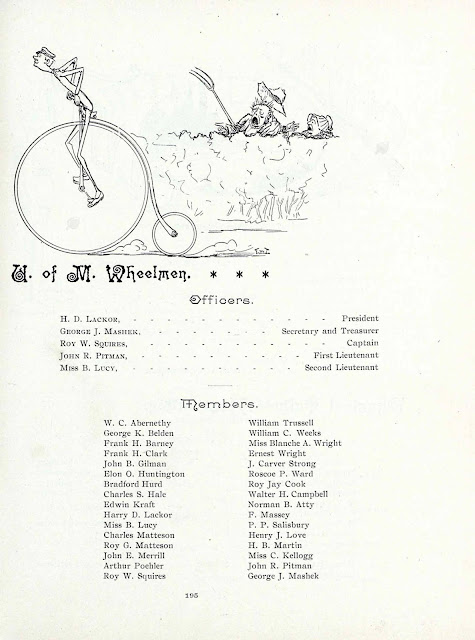 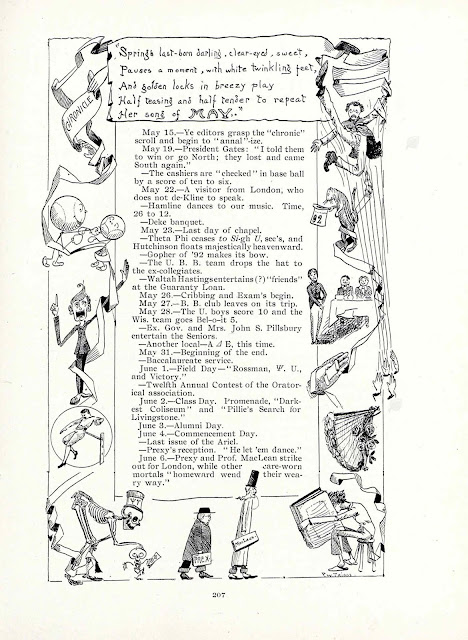 The 1894 Minneapolis, Minnesota city directory listed Triggs, a Tribune artist, at 1300 S E 6th Street, the same address as his parents. The Catalogue of the Phi Kappa Psi Fraternity had his address as 303 Washington Avenue, S. in Minneapolis.

The Mower County Transcript (Lansing, Minnesota), January 13, 1897, published this item: “Spring Valley Vidette: Mr. Floyd W. Triggs, the Chicago Daily News cartoonist, is enjoying a furlough at the home of his parents, Mr. and Mrs. M.H. Triggs, of this city.”

In the 1900 census, Triggs lived with James Collins, an author, in Vernon, Illinois.

During 1902 Triggs provided stories and art to Metropolitan Magazine and the New York Press newspaper. 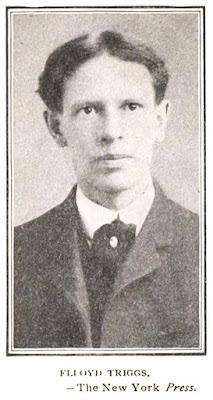 The Connecticut Marriage Record, at Ancestry.com, said Triggs married on July 31, 1903 in Darien. The family tree had his wife’s full name, Effie Gertrude Overly.
In the 1910 census Darien, Connecticut was Triggs’ home, located on Old Post Road. The newspaper cartoonist had two sons. Also in the household was his wife’s niece, Amelza K. Overly, a 16-year-old artist.

Triggs completed the 1917 Connecticut military census form on February 15. The artist said he lived in Darien. His height was five feet four-and-a-half inches and weight 110 pounds. He had three dependents. He could ride a horse and drive an automobile but not a motorcycle.

American Newspaper Comics (2012) said Triggs produced The Busyville Bees from May 28, 1910 to December 16, 1918. M.L. Baum did the writing from the start to September 26, 1914. The series appeared in the Christian Science Monitor. 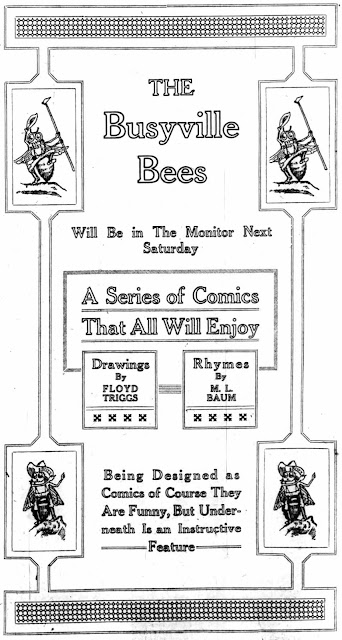 The Bridgeport Times (Connecticut), December 17, 1918, reported the jury summons for two murder cases. Triggs was named as a juror.

Triggs passed away August 23, 1919, in Stamford, Connecticut. He was laid to rest at Spring Grove Cemetery in Darien, Connecticut. His death was reported in several newspapers and some of them said he worked at the Chicago Tribune, but no information has been found supporting it. Triggs did work at the Minneapolis Tribune and Chicago Daily News. An obituary appeared in the New Britain Herald (Connecticut), August 25, 1919.


Stamford, Aug. 25.—Floyd Wilding Triggs, a cartoonist, died here suddenly Saturday night. His home was in Darien but he was staying in this city temporarily. Mr. Triggs was 47 years old, a graduate of the University of Minnesota and the Chicago Art Institute, and formerly was a cartoonist for the Chicago Tribune. He made his home in Darien in 1903 and was connected with newspapers in New York city and Boston. Mrs. Triggs and two sons survive.

Another death notice was published in American Art News, September 13, 1919.


Floyd Wilding Triggs, artist and cartoonist died at Stamford, Conn., Aug. 23 last, aged 47. He is survived by a widow and two sons, was a graduate of the University of Minnesota and had been connected with the Chicago Art Institute. He was a cartoonist on the Chicago Daily News previous to coming to Darien, Conn., in 1903. Later he did cartoon work for the N.Y. “Press,” and the “Christian Science Monitor.”

Triggs’ fraternity mentioned his passing in The Shield of Phi Kappa Psi, October 1919.


Floyd Wilding Triggs, Minn. Beta ’90, the well-known artist and cartoonist, died suddenly in Stamford, Conn., August 23, 1919. He was born in Winnebago, Ill., March 1, 1872. He was graduated from the University of Minnesota and the Chicago Art Institute. He has successively been cartoonist for the Chicago Daily News, New York Press and Christian Science Monitor.