Frederick M. “Fred” Berkley was born on February 8, 1887, in Manhattan, New York, New York, according to his World War I and II draft cards. Nothing is known about his early life and education. An Associated Art Studios advertisement appeared in Cartoons Magazine, April 1916, and said Berkley had been a student. Berkley has not yet been found in the 1900 U.S. Federal Census or the 1905 New York state census.

Berkley was news in a competing newspaper, the New York Sun, September 12, 1908.


Three Charged with Assault
The Man Beaten Said to Have Given Evidence in a Divorce Suit.
Frederick Berkley, a young man who said he was a cartoonist; his sister, Mrs. Hattie Feinberg, and his mother, Mrs. W.F. Berkley, all of 409 West 145th street, were locked up at Police Headquarters last night charged with assault and highway robbery by Jacob Gelot, a real estate dealer of 61 West 115th street.

Gelot said that the three, had waylaid him at 116th street and Madison avenue, knocked him down and beaten him, and while Mrs. Berkley and her son had held him the daughter had gone through his pockets and robbed him of $65. In the midst of this Detectives Walsh and McCullough ran up and bagged the three. Gelot was badly beaten.

The detectives were able to explain further the motive in the case. From conversation with the four persons they gathered that Mrs. Feinberg had recently been divorced on evidence furnished by Gelot. They had enticed Gelot to the spot by a letter and then proceeded to take their revenge.


Berkley has not yet been found in the 1910 census.

The 1912 Newark city directory had three listings for him: the proprietor of The Berkley School of Cartooning and Berkley-Freeman Company at 223 Market Street; Berkley and Howard Freeman of the advertising firm, Berkley-Freeman Company; and the Berkley School of Cartooning. In the 1913 directory Berkley’s residence was at 20 West Kinney and his school at 92 Park Place. 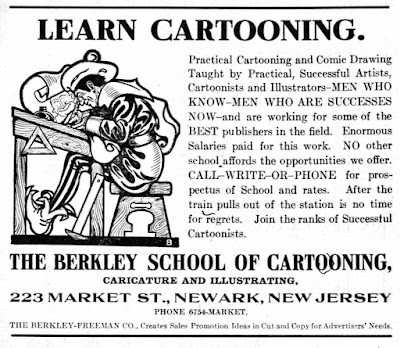 He copyrighted his school’s pamphlet in 1912.


Reorganization of Berkley School of Art.
The Berkley School of Art, a duly organized corporation, has taken over the Berkley School, which was founded several years ago by a newspaper artist whose name it bears and who is still the head of it. This school is now located in the heart of New York’s business centre at 11 West Thirty-fourth street, opposite the Waldorf-Astoria Hotel. The Berkley School gives students the practical instruction in all branches of art work, teaching cartooning for newspapers and magazines, illustrating for books, fiction articles and title pages, advertising and commercial art work, designing of theatrical posters and the methods by which the artists work, is finally reproduced so that thousands of copies can be run off on the printing presses and reproduced exactly as the artist made the original drawing. For years the schools of art have overlooked the reproduction end of this work, but the Berkley School is one of the first to recognize and many students who have failed in other schools are now holding positions or selling their work, due to this very feature, which these other schools have heretofore overlooked. 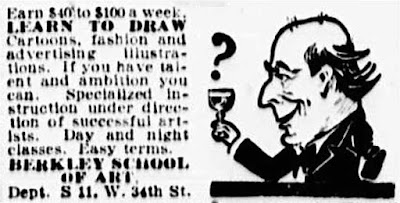 The school was noted in Cartoons Magazine, December 1913.


The Berkley School of Art, Newark, N. J., has recently been incorporated with a capital of $50,000 by F. M. Berkley, and M. J. Ready of Newark, and F. J. Dever of New York City, to conduct schools of art, cartooning and caricature.


The 31st Annual Report of the State Board of Assessors of the State of New Jersey for the Year 1914 had a listing for the school.

At some point Berkley returned to Manhattan. The 1915 New York state census said he was married to Jessie. His step-son was “Milton S Loveaire”. The family lived at 155 Audubon Avenue. Berkley was an artist at The New York Times.

On June 5, 1917, Berkley signed his World War I draft card. His Manhattan address was 678 Academy Street. He was an advertising manager at the E.J. Goulston advertising agency at 225 Fifth Avenue, New York City. His description was tall, medium build with blue eyes and dark brown hair. He had the same address in the 1918 city directory.

Berkley was listed as a Yonkers, New York resident in the 1919 city directory. His address was 108 Valentine Lane.

The same address was in the 1920 census. Berkley was a landscape artist and his step-son’s name was recorded as “Loverie W. Berkley.”

The 1925 New York state census recorded Berkley in Manhattan at 500 Fort Washington Avenue. The cartoonist had a new wife, Virginia. When the 1925 city directory was released his address was 217 West 259th Street and occupation newspaperman.

The 1930 census has a “Frederick M Berkley” in Cleveland, Ohio at 1932 East 97th Street. He was “single” and employed as an newspaper advertising man. His partner was Francis W. Hawes, a widow.

Berkley has not yet been found in the 1940 census.

Berkley was in Manhattan at 5000 Broadway when he signed his World War II draft card on April 26, 1942. Berkley was unemployed. His wife, Virginia, was also named on the card. His description was 5 feet 11 3/4 inches, 160 pounds with blue eyes and gray hair.

The 1943 Manhattan directory listed Berkley at 1457 Broadway. He worked in advertising.

The Social Security Applications and Claims Index, at Ancestry.com, said Berkley filed a claim on February 15, 1952.

An obituary for Berkley has not been found. The New Jersey Death Index, at Ancestry.com, has a “Frederick M. Berkley” who passed away in November 1954.