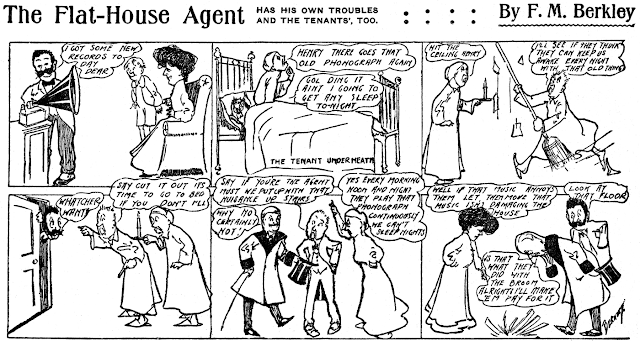 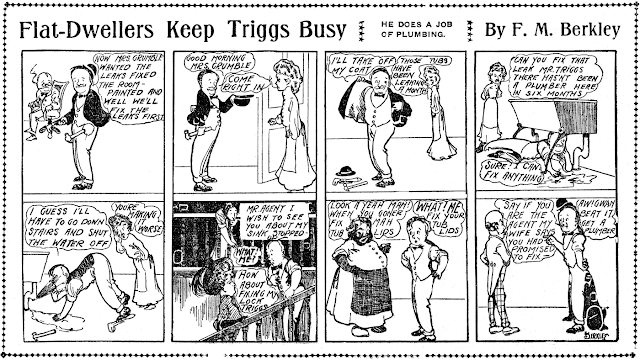 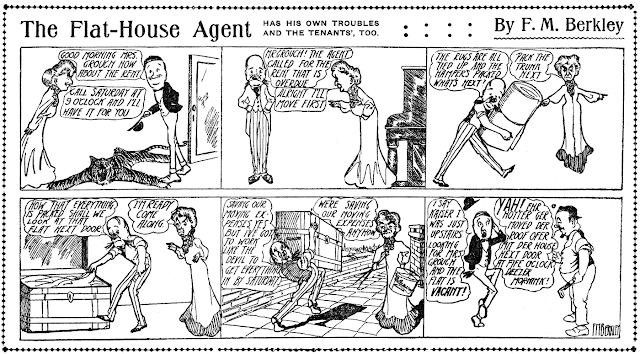 We've seen a number of so-called cartoonists in our Obscurities who truly should have been outlawed from wielding a pen, but Fred M. Berkley may hold the distinction for the highest profile attained by one of them. He managed to get three different series published and syndicated by the New York Evening World, one of the highest circulation papers in the country, and did so in a substantial period of at least three years. What the Pulitzer organization saw in him I cannot fathom.

The first and longest-lasting of Berkley's creations was a strip about an apartment building manager named Triggs. Despite setting himself up for a practical infinitude of gags, Berkley could only manage two -- Triggs can't keep up with the maintenance, and tenants fail to pay their rent. Even these two gag subjects fall resolutely flat time after time under the ham-handed direction of Berkley, who simply can't draw or write worth a damn. It has often been said that a newspaper cartoonist can get away with great art and bad writing, or great writing and bad art, but Berkley proves that a third option cannot be ruled out.

The strip was variously known as Flathouse Agent Triggs, The Flathouse Agent, The Flat-Dwellers, Triggs Has His Troubles, and other similar versions, and it ran from October 15 1907 to July 14 1908 as a weekday strip. I wonder if Berkley was himself a 'flathouse agent' as the subject seemed near and dear to his heart -- he would return to the same subject for his third series, Among The Flat-Dwellers.

The World finally wised up and didn't waste any more printer's ink on Berkley. He looked for greener pastures in the field of ... get this ...  art instruction! Berkley started the Berkley School of Art, in which he offered to teach youngsters how to "Make $40 to $100 per week" as newspaper cartoonists. No word on how many future cartooning greats were produced by Berkley's school, but it seems telling that one of the few pieces of documentation I can find about the school is a report of a legal judgment against them.

Comments:
Berkley does deserve a prize for creating the most bizarre and phoniest of all the bizarre and phony German accents that filled early 20th century comic strips.