Obscurity of the Day: Lyttle Women 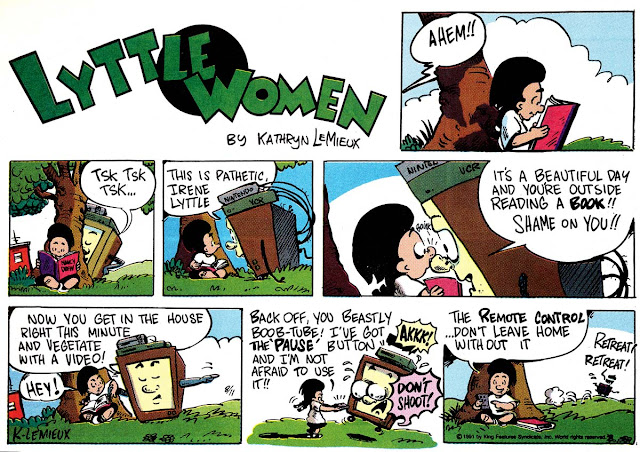 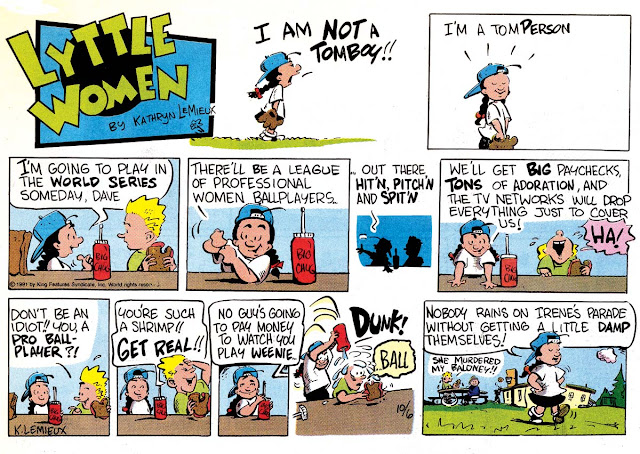 King Features finally noticed by 1990 that they had no women cartoonists in their stable (if we don't count writer Bunny Hoest). Seeking to remedy that situation, they resolved to sign a female-created strip in the hope that they could catch fire with their own phenomen like Lynn Johnston or Cathy Guisewite. They chose Kathryn LeMieux's Lyttle Women, which they began advertising in 1990, but as best I can tell did not actually hit papers until February 4 1991*.

Lyttle Women starred a pair of kids named Irene and Amy Lyttle (hence the title). Irene is a tomboy while Amy is more into girly things like fashion. Both kids, though, are into female empowerment despite their differing personalities. As with many 'comics with a cause', the strip tried to walk a tightrope between humor and proselytizing.Too often the humor suffered for the cause, leaving editors and readers feeling like the strip was cheerleading for feminism more than it was offering laughs.

Perhaps Lyttle Women could have found a happy medium if LeMieux had been given more time to find it, but the plug was pulled after less than a year and a half, with the last strip appearing May 30 1992**. King's next female-created strip would be Between Friends by Sandra Bell-Lundy, which they picked up from self-syndication in 1994, and is still running today in 2020.

LeMieux later became one of the founding Six Chix, keeping her day in the line-up from 2000 to 2009. Today she is painting at her art studio in Tomales California.

Comments:
One of my favorite artists. I was always amazed by how she used black in her turn at SIX CHIX. LeMieux and Mark Tonra are the two still living cartoonists I most wish still did cartoons.