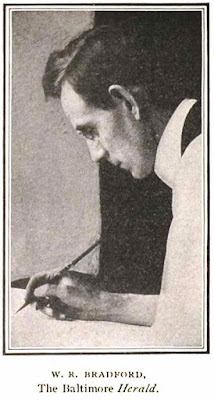 Walter Russel Bradford was born May 15, 1872 in Dayton, Ohio. The birth date is from his death certificate and the birthplace was mentioned in numerous obituaries. Bradford’s middle name was recorded on his marriage certificate.

In the 1880 U.S. Federal Census, Bradford was the youngest of five children born to Harry (Henry) and Sarah. They lived in South Bend, Indiana at 46 General Taylor Street. His father was a painter.


… began work in the Studebaker Carriage Works, at South Bend, Ind., but his inherent talent for sketching led him to attend the night classes for instruction in drawing and inadvertently to the acquaintance with John T. McCutcheon and other famous cartoonists, who, appreciating his talent, encouraged him to pursue the practice.

In the 1900 census, Bradford, his English wife and two-year-old son, William, lived in Chicago at 301 Osgood Street. Bradford’s occupation was “typewriter”.


At the Chicago Tribune, Bradford produced Animal Land (1901) The Inquisitive Bunnies, and Languid Leary and His Wonderful Tomato Can (1902). He contributed a strip to Alice’s Adventures in Funnyland.

There were two strips, Mrs. Rummage the Bargain Fiend (1906) and Mr. and Mrs. Getrichquick (1910), Bradford may have drawn. The strips were signed Russel (with one L) which was his middle name.

The 1910 census recorded the Bradfords in Philadelphia at 1245 56th Street. Bradford’s occupation was newspaper cartoonist.

Bradford was a shutterbug. One of his photographs was published in Editor & Publisher, March 11, 1916. He contributed to Kodakery, November 1922, “Home Pictures That Are Different”, January 1923, “Indoor Silhouettes” and February 1923, “A New Angle on Doll Photography”.

According to the 1920 census, Bradford continued cartooning in Willistown, Pennsylvania on Monument Road. At some point he returned Philadelphia.


The closing down of the North American, however, was a severe blow to him, as it seemed like a separation from all that he had so delighted in for years. His desk had become his playground as much as his workshop. When his newspaper passed to the hands of the Public Ledger, Bradford was the radio editor, and his creations in that role were of the same subtle humor which characterized his exploits in other roles.


Bradford passed away on June 4, 1925, at his home, 5551 Delancey Street in Philadelphia. The death certificate said the cause was pulmonary tuberculosis and the secondary cause was toxic psychosis. In his book, Trolley to the Moon: An Autobiography (1973), Eric Hodgins wrote:


… My father took me to Philadelphia and the North American offices several times, where I met such heroes as Walter Bradford, the North American’s one and only strip cartoonist, creator of John Dubbalong and Enoch Pickleweight, to whom a son was duly born, named Dill. It was fine 1908 humor. I remember the shock my mother handed me when she revealed that Walter Bradford had a vice. He drank. That was why his cartoons were occasionally missing! …

“He loved his work there,” Mrs. Bradford said. “He loved the characters he created and had fun out of them, Enoch, Maria, Dill and Pa Pickleweight — Ichabod, the old Injun fighter. The Scow cat was his mascot when he built his motorboat in our back yard in West Philadelphia about fifteen years ago and named it the Dubbalong. He and Hugh Sutherland collaborated in his strip-comics over many years.”