Obscurity of the Day: Glen Forrest

After World War II, the Chicago Tribune's Midas touch with comic strips ended abruptly. That Midas had a name, and it was Joseph Medill Patterson. After he died in 1946, you'd swear the syndicate execs went into such deep mourning that they intentional picked strips that had no hope of selling, as a memorial to Patterson's genius.

Case in point is Glen Forrest, which was obviously meant to be a "me-too" feature to feed off the popularity of Mark Trail. At the helm was William Ferguson, who had certainly proven his mastery of all things in the natural world with  a successful two decade run on This Curious World, a panel serving up odd facts about nature. Ferguson was not only a nature expert, but he was also a darn fine cartoonist with a clean and sensuous style. What could go wrong, you wonder?

Well, as it turns out, Ferguson's Achilles heel (yes, it's mythology day here on Stripper's Guide) was that he hadn't even the slightest understanding of how to write a comic strip. This Sunday-only strip started on September 14 1952 with this episode: 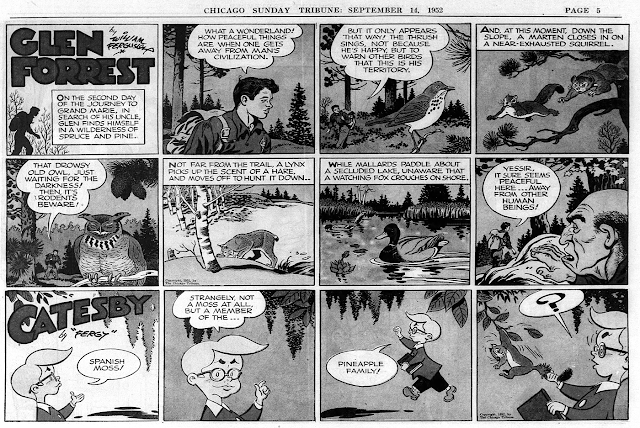 Why do we join our hero on the second day of his journey? Have we already missed an episode? Nope. Ferguson has succeeded in confusing his readers with the VERY FIRST sentence of his strip. It won't get any better.

Ferguson proceeds to try to tell his herky-jerky manic stories on a starvation diet of a third-page once per week. In fairness, this is a task that few cartoonists can pull off, but Ferguson practically gives a class on how not to do it. Characters are not so much introduced as just appear with no explanation. If you look at the color samples up top, there's not a strip in there that offers a synopsis of any kind, off-stage character names are bandied about constantly, and there's a general assumption that you, dear reader, have made it your life's work to take notes on the strip every week so that you can follow the unfollowable. And what a shame, because Ferguson's excellent art makes us want very much to like this strip.

Believe it or not, the Tribune stuck with this train wreck for almost two years. Glen Forrest was finally put to rest on May 30 1954, right smack in the middle of a story (the last color sample above is that last strip). I wasn't sure if some other papers might have run it longer, but I've since reviewed two other papers that ran it and they ended it on the same date.

By the way, the topper strip Catesby (seen in the black and white sample above) was offered throughtout the run, but rarely did anyone use it, including the Chicago Tribune.

Comments:
The title may be something of an inside joke, since Forest Glen is one of the neighborhoods of Chicago (Northwest Side).