Considering the great fame of R.F. Outcault's Buster Brown, his seminal place in comic strip history, and how influential he was on comics and consumer culture, you'd think that the comic strip would have been analyzed to death by now. Surprisingly, though, there is little analysis of its convoluted history. Believe it or not, there isn't even a definitive end date in print.

Two aspects of the Buster Brown strip are of special interest to me because they are full of unknowns. The first is the run of the strip in the New York Herald after Outcault jumped ship to Hearst in 1906. That's a subject for another day, though, as my research is still in process. So let's talk about the other interesting phase, which is the long slow demise of the strip.

Looking over a few of the standard references, little information is offered: Goulart says only that it was syndicated as late as December 11 1921. Horn says the last Outcault Buster Brown appeared in December 1921, and that the feature continued in reprints until 1926. Those references leave us with the impression that Mr. Outcault kept his nose to the grindstone until late 1921, but is that really the case?

According to his 1928 obituary, not quite. There it states that Outcault "gave up professional drawing about ten years ago, and since then had only used his talent for his own enjoyment in painting." That would seem to indicate that the strip was ghosted or in reprints since about 1918.

Alfredo Castelli in "Here We Are Again" has much more to say (apologies for probably awkward translation):

The plates were often reprinted; in the last years of production, even if signed "Outcault", they were made exclusively by "ghosts" including Marion T. "Penny" Ross, who drew in an elaborate Art Deco style and in 1916 opened a studio in Chicago together with Outcault . The anonymous Buster Brown concluded its appearance in the Hearst group's offerings on December 21, 1921 (and, in fact, some texts consider this date as the conclusion of the series); for another five years the production in syndication, with boards partially reprinted, partly made by less and less convincing "ghosts", some of whom tried with little success to modernize the character and the environments. In 1926 the "untitled" series also ended.


Castelli goes on to offer specific dates for the assisted and/or ghosted Buster Brown, citing Penny Ross again as the lead, as April 1 1917 to January 11 1920.

That April 1 1917 date gave me a starting place for research, and the citation of Penny Ross as a ghost offers my admittedly limited art-spotting skills a jump start. Before jumping in, though, just a word about Ross as a ghost -- to me it seems rather strange. Ross was in Chicago, while Outcault was (presumably) in New York, and Ross was in the middle of a successful long run with Mamma's Angel Child for the Chicago Tribune. Why would he feel the need to play an anonymous part with Buster Brown? I frankly don't get it, but before we get directly into looking at actual art, here's some preliminary proof, from the Chicago Tribune roto section of October 29 1916 (Ross on the left): 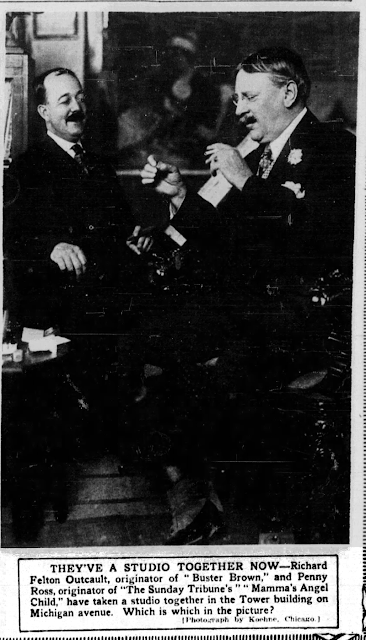 I sure wish I could find a little more detail about this shared studio, but this is the only thing I can find. The one clue I can find is that Outcault's advertising company was supposedly based in Chicago. So did he actually maintain a studio there for himself?

So anyway, back to that April 1 1917 cited by Castelli. I looked at the Buster Brown for that date and could see no definite evidence of Ross's hand (see below). That was disappointing, but then I checked a few strips on surrounding dates, and there was certainly evidence of other cooks in the kitchen, including Penny Ross. I ended up getting so interested in this ghost hunt that what was originally to be a single post for Stripper's Guide ended up as an extended series. In this series I'll be showing a very long run of Buster Brown strips and we'll try to figure out who, how and when Outcault was assisted and/or ghosted.

As I have stated before, I am not a particularly good art-spotter. Luckily, in at least some cases the presence of other artists on Buster Brown is obvious even to me. As this series unfolds, I encourage you to do two things: first, read the strips purely for enjoyment, because they really are often quite good. Second, I'd like you to exercise your own art-spotting skills -- share your opinions and take me to task when you think I've erred. Ideally we will all come out of this exercise having learned to do better art-spotting by learning from others.

Since we'll be looking for Penny Ross work, I encourage you to jump over to Barnacle Press and look at their archives of Ross' Mamma's Angel Child to familiarize yourself with his work. You'll find that his way of drawing children, especially girls, is a signature, and his favored action poses and facial expressions are another telltale. The problem with identifying Ross work, at least for me, is in his way of drawing adult males. To me they seem similar enough to Outcault's style that I'm lost if a Buster Brown strip focuses on these characters.

So, see you tomorrow as we begin our look at the long slow demise of Buster Brown.

Comments:
Interesting! I remember Buster Brown shoes as a kid and my mother would often call us Buster Brown when chastising us. Though I didn't make the connection that it was a strip once upon a time, it must have been well known enough for my Mom, who was born in 1938, to refer to it.

Hello Allan-
I have always thought that RFO kept at it into l919 or 1920, and the style changes were due to his getting feeble-handed with age, though it does seem that his signature gets scarcer. The 1921 examples I have are most likely a ghost, not Ross, but some one I would think was not good enough for the job. Someone could be using tracings from old strips, though more deftly than Charles McManus and his Newlyweds stint.
As for Penny Ross, Offhand I can't remember, or maybe I'm remembering Cole's talking about it, that the only Buster Brown art that was definately by Ross, was the bottom-half original art that Jerry Robinson (who thought it was Outcault) used in his book about fifty years ago.
RFO had an advertising cut service, I think you have highlighted some of these before, in the WWI era, showing Buster doing so many different things, like plumbing or painting related, that local advertisers utilized. Another series had the Yellow Kid doing trade-related things. I'm guessing these are actually by Ross, and that's what their "studio" was for. There's a series of these cuts showing a character made up for them, a short blonde gal with a huge head of hair, doing various domestic things, and another with an almost-look-alike to Esther Starring (Mamma's Angel Child), frolicking around all sorts of Automotive scenes. These were obviously by Ross.