Obscurity of the Day: Gimpey 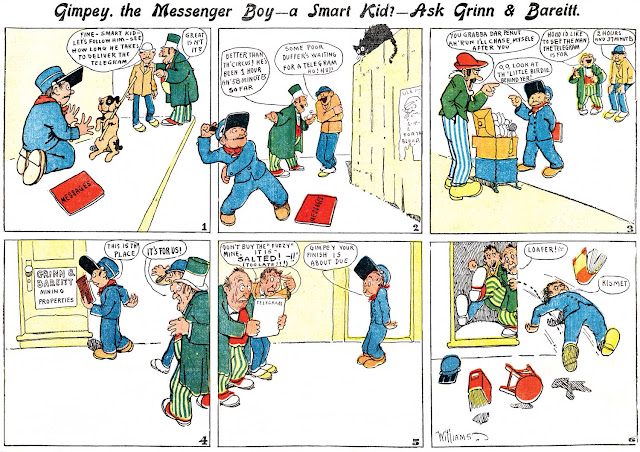 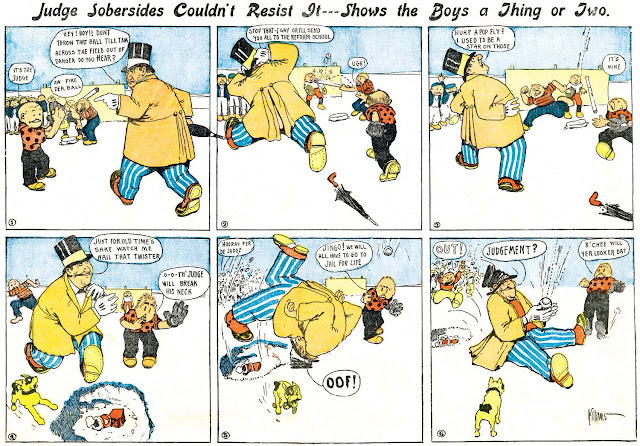 Here's one of those kid strips from the 1900s that number in the hundreds. This kid is named Gimpey, and if he's not careful he's going to lose his star status to this Judge Sobersides joker who is horning in on the fun.

Gimpey ran as an occasional feature of the Boston Globe Sunday comics sections from March 5 1905 to February 4 1906*. The strips are signed Williams, and I have long believed that they are by O.P. Williams; the art style is right, and he was in Boston, where he would later cartoon for the Herald and the Traveler. Oddly, though, Alex Jay didn't seem to find any mentions of his being at the Globe for his Ink-Slinger Profile. I'm sticking with the ID, though, until proven wrong.

Comments:
Hello Allan-
I've very seldom come across Boston Globe material syndicated to other papers. When I have, it's just about always Billy the boy Artist. A sure way of identifying early syndicates is the type font, which almost always used by the client as offered by the syndicate. The font used here is rather distinctive, so I'm guessing that would be a sure indicator of a Globe strip if there have been other instances.
If Williams set out to do a knockoff of "Jimmy the Messenger Boy", He improved on it.

Hi Mark --
Just to be clear, there's no question about it being a Boston Globe feature. That is definite. What I was questioning is my ID of "Williams" as O.P. Williams, who is not definitely known to have worked at the Globe.