Obscurity of the Day: Hamlet 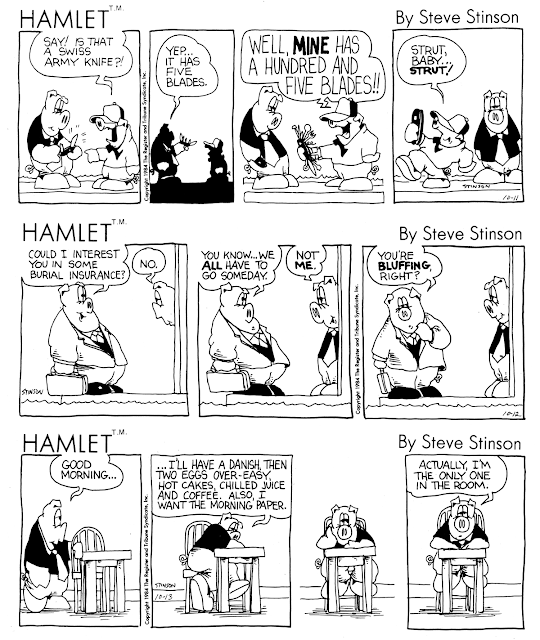 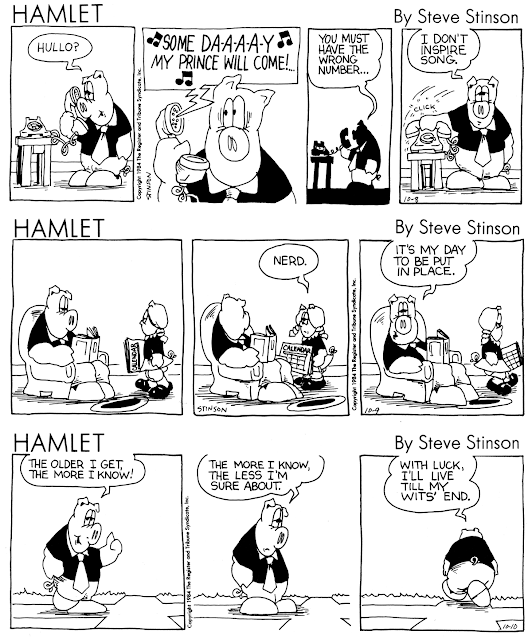 Answering the question on everyone's mind, "If pigs could be part of human society, would they be a lot like grown-up Charlie Browns?", Steve Stinson's Hamlet set out to provide the answer and it is a resounding "Yes!". The strip about a depressed porker, syndicated by Iowa's Register and Tribune Syndicate, found very few takers, so few that I can find no papers online that ran it. My files confirm that the strip did indeed make it into a paper somewhere, but more than that I cannot say. It began sometime in 1984, and may not have made it out of that year. Can anyone provide specific running dates?

Stinson tried out a number of newspaper features in the 1980s, and believe it or not Hamlet is the one with the highest profile.  He later got into writing and drawing children's books and paints some pretty cool artwork. Go check out his website.

Comments:
I remember seeing "Hamlet" listed in the Editor & Publisher Syndicate Directory back in 1984, so I have been familiar with this comic strip for a long time, although I have never actually seen episodes of it before.

I have no idea what newspapers it appeared in, nor its start and end dates, either, although apparently, it did run in October 1984, from seeing the dates on the samples. If it only ran for about one year, it likely did so anywhere from fall 1983 into spring 1985.

Around that time, one comic strip that was a favorite of mine, "Dick And Jane," (also distributed by The Register And Tribune Syndicate) ran around this same time, and was just as short-lived. It also didn't seem to have much for takers, either. My recent guess is that "Dick And Jane" more likely ran in suburban newspapers, as it did not seem to appear in very many big major newspapers.

Was it in the LA Times?
It rings a bell, and I was living in LA at the time.

Hello Allan-
I used to have access to many of the leftover files of the Register & Tribune files, which were transferred to King Features when we absorbed them in the 1980s. Not one page of this one was kept!

@John Lund: There was a post here about "Dick and Jane" a few years ago (http://strippersguide.blogspot.com/2016/01/obscurity-of-day-dick-and-jane.html) which listed some newspapers it was published in.

I can confirm that "D&J" ran in the Tampa Tribune. I even wrote a letter published in the Tribune criticizing the strip.