Michael Lucas “Mike” Wong was born on June 14, 1931, in Siskiyou County, California, according to the California Birth Index at Ancestry.com.

In the 1940 U.S. Federal Census, Wong was the youngest of four siblings. Their mother was the head of the household. The whereabouts of their father is not known. Also boarding with them were two teenagers with the Wong surname. They all resided in the Chinatown of Newcastle, California.

According to the 1950 Sacred Heart Academy yearbook, Atrian, Wong enrolled in the high school in 1948. He had transferred from San Francisco, California.

The 1949 Klamath Falls directory said Wong was a student, and his father, Lee H. Wong, operated the Oriental Cafe. Their home address was the rear of 619 1/2 Main Street.

Wong graduated in 1950. Information about his art training has not been found. 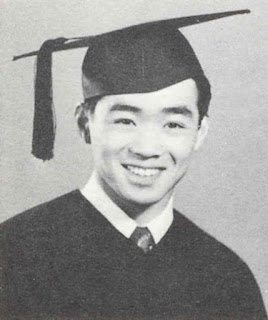 The 1951 directory said Wong resided at 319 Main Street. He was a stockman at the Walgreen Drug Company. His parents were still at 619 1/2 Main Street and involved with the Oriental Cafe.

Mike Wong, young Klamath Falls cartoonist, is now associated with Hank Ketcham, https://en.wikipedia.org/wiki/Hank_Ketcham who syndicates the cartoon series, “Dennis the Menace,” which started this week in the Herald News. Mike is the son of Mr. and Mrs. L.H. Wong, owners of the Oriental Cafe on Main Street. He was introduced to Ketcham by Scott Newhall, https://en.wikipedia.org/wiki/Scott_Newhall cartoonist [sic] for the San Francisco Chronicle, when he went to San Francisco to market his work. He is a graduate of Sacred Heart Academy and is 22 years old. He recently sent an autographed copy of “Dennis”, to Maurice Miller, circulation manager of the H & N.

It’s not clear how Wong assisted Ketcham who was living with his wife and son in Carmel, California.

American Newspaper Comics (2012) said the strip, Romulus of Rome, debuted April 10 1961 in the San Francisco Chronicle. It written by J.P. Cahn and drawn by Wong. Editor & Publisher, January 5, 1963, said Romulus of Rome would be syndicated in early 1963. Editor & Publisher, March 2, 1963, reported how the Chronicle was promoting the strip locally.

The recipe for the Kooba kiss is being offered San Francisco Chronicle readers in promotion featuring the “Romulus of Rome” historical adventure comic strip released through Chronicle Features Syndicate. This is the drink all Kooba enjoyed in the days of Romulus, according to the strip’s creators, J. P. Cahn and Mike Wong. (E&P, Jan. 5, page 42). The promotion copy described the beverage as “a delectable potion which changed all history.” The Chronicle declares the recipe is available—by mail only—to Kooban Information Bureau, Room 303, Chronicle. A self-addressed, stamped envelope is required. 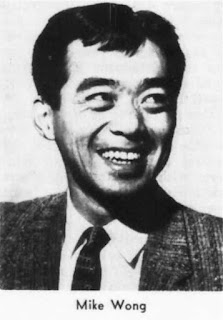 Wong’s artistic skills were noted in the Oakland Tribune, August 8, 1966.

Mike Wong, the hot Berkeley artist, was commissioned by John Von Weisel of the U.S. Treasury Dept. to do a certificate (that will be presented KRON-TV for public service selling Savings Bonds) showing a $75 bond with the award information in the center. Wong finished the design, rushed it to Oakland National Engraving and—whoa! “No chance,” they told him. “It’s against the law to make engravings like that.” Wong has to get a note from Von Weisel saying it was NOT a counterfeiting attempt. …

So far no additional information on Wong has been found.

Wong passed away on April 15, 1988, in Alameda County, California, according to the California Death Index at Ancestry.com.

Comments:
How funny that Kooba Kiss, "the delectable potion that changed history" bears the same name as Victor Fox's fraudulent Golden Age cola, Kooba Cola. I understand "Kooba" was intended in the strip to satirize Cuba,so this is probably coincidence. It'd be great, though, if it were an incredibly obscure in-joke.