Obscurity of the Day: Romulus of Rome 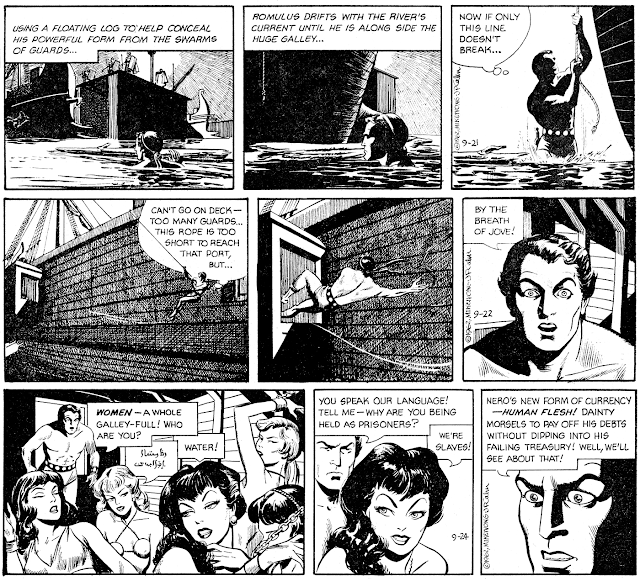 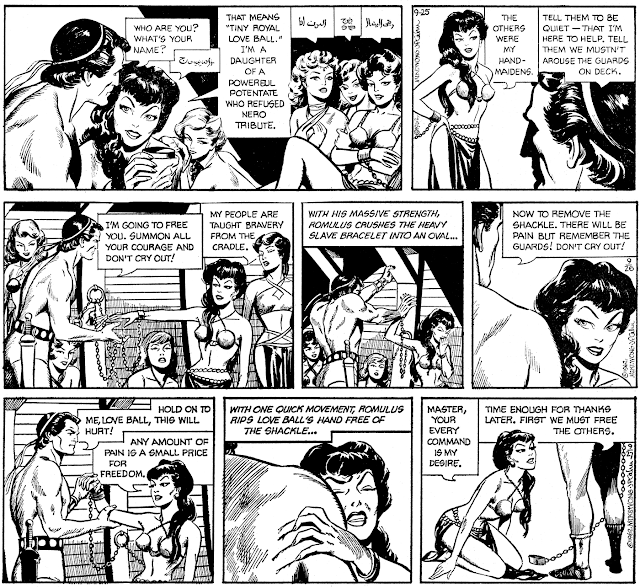 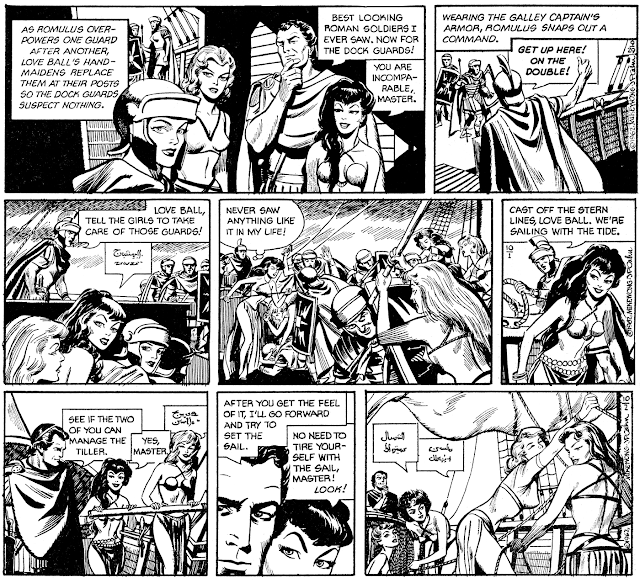 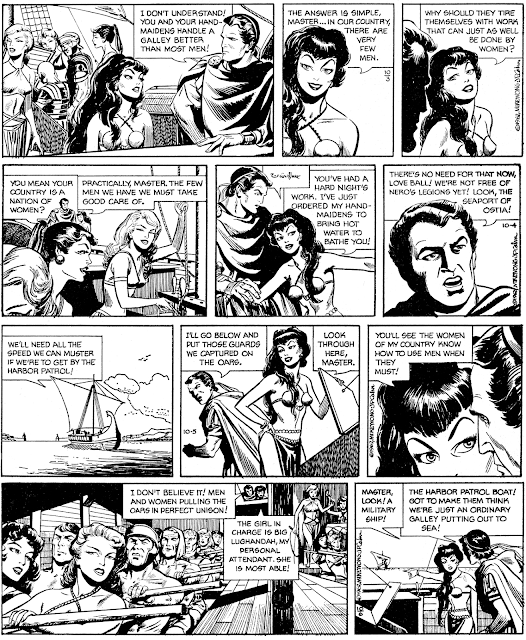 A lot of obscurities deserve their fates; maybe most of them. One that most certainly did not was Romulus of Rome, an adventure strip set in the Roman Empire during the reign of Nero. Our hero was Romulus; not the famous one, but an entirely fictional (as opposed to mythological) direct descendant of one of the twin founders of Rome. Our Romulus is an outlaw, a sworn enemy of the emperor and supposedly the rightful ruler of the Empire. He's also (of course) a handsome hunk who makes all the ladies swoon, a master swordsman, and as pure as the driven snow.

Writer C.J. Cahn knows his subject, but he doesn't get pedantic about it. The strip doesn't seek to give us a history lesson and throws in a little humor here and there to keep things light. Cahn seems to  know just the right percentage of baloney to add in to the steak of this historical epic to make a delicious Roman swords-and-sandals thrill-a-minute sausage. Artist Mike Wong, meanwhile, offers excellent cleanly delineated art that, on its best days, reminds me a lot of the great Russ Manning. Wong also loves to draw sexy toga-clad women, who figure into the story constantly.

Romulus of Rome debuted as a local feature of the San Francisco Chronicle on April 10 1961, and ran there for over a year and a half as a wonderful Bay Area secret. However, the Chronicle was at this time getting serious about syndicating its wares, and finally Romulus of Rome was offered to the world at large, slated to start nationally on January 7 1963.

This, unfortunately, was when things went to hell. The strip changed in significant ways, none of them good, for its national audience. Cahn decided that hero Romulus was a drag on the proceedings, and his figuring into the stories was reduced significantly. Instead, the strip became an unfunny satire on current events. The first storyline for the national strip was a long meandering one about an island nation called Kooba and its crazed dictator Kasdro. If this sounds like it has possibilities, take my word for it, it is awful. Kasdro's word balloons are 'written' in a sort of hieroglyphic that can be decoded if readers send a request in to the home paper. If you didn't do that, the next few months are a very long slog where one of the main characters speaks gibberish. A perfect introduction to a new strip, eh?

When the interminable Kastro storyline is finally finished, we go on to a story starring Roman versions of  Elizabeth Taylor and Eddie Fisher, and later, a story about a big peace summit between Rome and the other empires, with current political figures standing in for their historical equivalents. Wong's caricatures of these personalities is spot on, but the humor is consistently flat, and the stories have become little more than an excuse for the lame satirical shenanigans.

Finally, at the end of the peace summit storyline, we have Romulus jumping out of a giant celebratory cake to kill his nemesis, Nero. He trips and his sword finds its way into the hand of his adversary, who proceeds to run Romulus through. The last panel of the strip is a gravestone emblazoned with the name of our fallen hero. Thus ended the strip, on December 21 1963, an amazing missed opportunity. A year and a half of sharply written and drawn adventure followed by a sad case of jumping the shark.

Why did Cahn change the strip like that? By 1963 it was pretty obvious that adventure strips were no longer going to be big sellers, especially one like Romulus of Rome that was so offbeat. It would have taken a good salesperson to convince newspaper editors to take a chance on it. Instead, they probably tried to sell the strip as some bizarre hybrid between Prince Valiant and Pogo, which theoretically could work, but the will and the ability just weren't there.

All I know of Cahn is that he also wrote articles for the magazine True in the early 60s. Of Mike Wong I also know practically nothing; in the early 50s he was a 'part time' cartoonist for the Klamath Falls (OR) Herald and News, and apparently then began assisting Hank Ketcham in some way starting in 1954. Both these creators had a lot to offer to newspaper comics, and it's a shame they were (as far as I know) never heard from again. Alex Jay, though, has managed to figure out some biographical details, which will be seen in our next post.

Comments:
Hello Allan-
By your intriguing description, it would have been more interesting to see some of the Castro and Liz material!
You say the original version appeared only in the SF Chronicle for the first twenty months, but I notice in your samples there is a cut into the first panel of each, in the upper left corner to accomodate clients that would fill that space with the strip title, which was often done in Tabs and foriegn papers, mostly. If there was but one paper Romulus ran in at the time, this wouldn't have been necessary. I don't know when the Chronicle started "Chronicle Features", but the copyright line here would indicate the two creators owned it themselves.

This was an unexpected pleasure. Looking at the first strip on the page, it was immediately clear that this was well done, but reading further I was really captivated by Cahn and Wong's storytelling. Thanks for posting this terrific and undeservedly obscure treat.

I have the first couple of months but really want to see more of this strip. It is a holy grail for me. Thanks for this write up!