Obscurity of the Day: Forty-Second Cousins 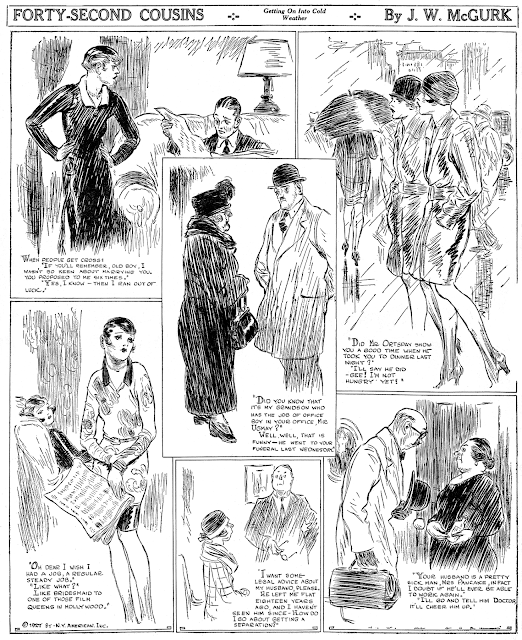 Back when being a sports cartoonist was an actual thing -- most major papers had them -- J.W. McGurk was enough of a standout that he was snapped up by Hearst. His cartoons were characterized, to my eyes, by a rough-and-tumble masculinity, a muscle-flexing virility that emphasized the athleticism of sports.

That makes it quite unexpected that McGurk also produced for Hearst a Sunday page of cartoons that emphasizes practically the polar opposite -- quietly delicate and sophisticated gags about social and interpersonal quirks of behavior. And this wasn't a case of trying to fit a round peg into a square hole -- McGurk's feature was to my mind quite artistically and humorously successful, even if it couldn't find a lot of newspaper clients.

The feature debuted on February 5 1922*, and did not have a running title until long into the run; originally each week had a title related to that week's common theme of the cartoon vignettes. It wasn't until the first week of 1926** that McGurk or his syndicate decided that a running title might help with sales. The title became Forty-Second Cousins, and seldom was the feature seen outside of Hearst-owned papers, before or after the title addition.

One interesting vignette about the feature is that it was taken over for three weeks (August 30 to September 13 1925**) by a young Russell Patterson, presumably subbing for the ill or vacationing McGurk.

Another minor oddity is that the feature was syndicated under one of the Hearst-owned syndicates, Star Company, for the first three years of the run, but after that was copyrighted to the New York American, Hearst's east coast flagship paper. Syndicated material was not usually run under this imprint, and it would be interesting to know why Forty-Second Cousins was an exception.

McGurk's impresive foray into the more genteel aspect of cartooning seems to have been cancelled as of June 3 1928***.