Ted Miller was born Edmund Gordon Miller on February 19, 1918, in Haverhill, Massachusetts. Miller’s full name and birth information are from his World War II draft card and Social Security application. His parents were Ralph G. Miller and Helen Sargent.
In the 1920 and 1930 U.S. Federal Censuses, Miller, his parents and three older siblings lived in Haverhill at 131 Brockton Avenue. His father was the proprietor of a plumbing and heating business.
In 1935 Miller graduated from Haverhill High School. He contributed an illustration to the school yearbook, The Thinker. 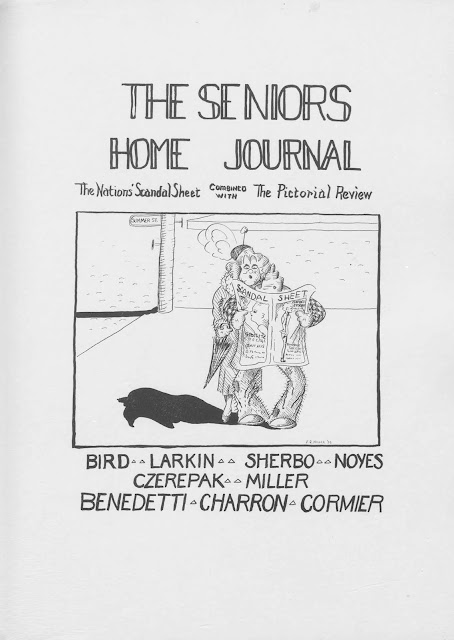 According to the 1940 census, Miller was the only child living with his parents. They remained in Haverhill at a different address, 21 Windsor Street. Miller was a self-employed cartoonist.
Six months later Miller signed his World War II draft card on October 16, 1940. His employer was the Haverhill Evening Gazette. His description was six feet, 160 pounds, with blue eyes and blonde hair. At some point his 21 Windsor Street address was crossed out and replaced with 106 Hempstead Avenue, West Hempstead, New York. He enlisted in the Army Air Corps on December 27, 1941.
During his service, Miller contributed cartoons to Yank, the Army Weekly. One of his cartoons was described in Yank, the Army Weekly: Reporting the Greatest Generation (2004).

In a latrine in the November 16, 1945, issue, Sergeant Ted Miller had a full eagle colonel rewarding a hard-scrubbing Private Smith for excellent efforts, “I’m having you transferred to the officers side!”

Flying’s Giraffe
Sirs:
By way of interest, I thought I’d pass this on to you. A Liberator pilot, fresh back from the China-Burma-India theater and with 101 missions to his credit, was in here yesterday with news of one of my cartoons which he found clipped and posted in a remote operations tower deep in China. It was that giraffe job [August, ’43, issue]; I guess it smacked of the environment enough to warrant their keeping it. Anyway out shows how Flying gets around.
M/Sgt. Ted Miller Mitchel Field, N. Y.
Cartoonist Ted Miller is a regular contributor to Flying. — Ed.

Miller’s draft card said he was honorably discharged on December 14, 1945.
American Newspaper Comics (2012) said Miller was the last of three artists to draw Diary of Snubs, Our Dog aka A Little Dog’s Diary. The series debuted with Paul R. Carmack, from June 4, 1923 to February 28, 1939. He was followed by Richard Rodgers, from March1, 1939 to September 15, 1947. Miller’s run was from September 16, 1947, 1947 to August 31, 1954. The series appeared in the Christian Science Monitor. Miller also produced Sunny Climes for the Christian Science Monitor. The weekly panel debuted January 2, 1951. It was continued by Grant Wilson for an unknown period of time.
The Newton Graphic (Massachusetts), March 30, 1950, reported Miller’s upcoming speaking engagement.

Annual Meeting of Auburndale Woman’s Club to be Held April 12
Mrs. Thomas E. Crosy, day chairman, will introduce the speaker, Mr. Ted Miller, cartoonist, who will take for his subject, “This Funny Business.” He will tell the story behind the comic strips. He created the comic strip “Loop Carew” for the Haverhill Evening Gazette prior to his enlistment in the AAF. During the war he contributed regularly to “Yank.” His cartoons have appeared in such publications as and Better Homes and Gardens and he recently became associated with the Christian Science Monitor as artist and author of ‘The Diary of Snubs Our Dog.’”

Under the auspices of Nashaway Woman’s club, Ted, Miller, well known cartoonist and humorist, will present chalk-talk entitled “This Funny Business” at their meeting on Monday at 2:30 pm in the Odd Fellows hall. He has been in the business since 1935, created the comic strip “Loop Carew” in 1939, and during World War II when he in the Air Force he contributed to Yank. His cartoons major magazines and children’s comic books, and at present he is seen on “Your New England Weather” over WHDH-TV

Born Feb. 19, 1918 in Haverhill, Mass. Drew for high school aper. Later met Wally Bishop in St. Pete, Fla. and became hopelessly addicted to cartooning. Contributed to ‘Yank’ during the war and have sold to all markets since. Did a daily strip for the Christian Science Monitor for eight years and later a panel, ‘Sunny Climes’ for them. Currently am under contract to the Hall Syndicate.
We are five, (one wife), two girls and a boy live in West Newbury, Mass. ...

Miller passed away on May 31, 2007, in West Newbury, Massachusetts. An obituary was found at Dole, Childs & Shaw.

Edmund G. “Ted” Miller, 89, a freelance artist and TV personality, died peacefully Thursday at his home with his family present. Ted was the husband of Florence E. “Betty” (Peel) Miller.
Born in Haverhill February 19, 1918, he was the son of the late Ralph G. and Helen A. (Sargent) Miller.
Educated in Haverhill he was a 1935 graduate of Haverhill High School. During the war he served four years in the U.S. Army Air Corps as an intelligence specialist before his discharge as a Master Sergeant in 1945. At this time his cartoons appeared in the Army publication “Stars and Stripes”. He and his family moved to West Newbury in 1946. He did art work for the New England Telephone Yellow Pages, and for seven years drew and wrote a comic strip “The Diary of Snubs Our Dog” for the Christian Science Monitor.
In the 50’s he appeared for many years on Eileen Kneeland’s TV show “Lady of the Bookshelf”. With the advent of Channel 5 Ted began a twenty year career as the weatherman and incorporated his famous seagulls “Barney” and “Leonardo” into his program at WHDH. As an in court artist he covered the inquest following the death of MaryJo Kopechne.
He was devoted to his family and considered himself fortunate to engage in work he loved. Earlier he had enjoyed sailing and boating along the New England coastline, and winter golf trips with his wife to Bermuda. He enjoyed bicycling in his hometown, and speaking to anyone who would stop to say hello outside his home.
In addition to his wife of 65 years Ted is survived by his son, Grant Miller of West Newbury; daughters, Susan Miller and her husband Joe Edwards of Michigan, Marilyn Miller of Bradford; one granddaughter, Megan; sister, Francesca Lane of Newbury. He was the brother of the late Julian S. Miller, and twin sister Janice de Moulpied.
Relatives and friends are invited to the Memorial Service Monday 1:00 p.m. at Dole, Childs & Shaw Funeral Home, 148 Main Street, Haverhill. Private interment to follow at Linwood Cemetery. Calling hours will precede the service from 11:00 to 1:00 p.m. In lieu of flowers contributions may be made to Hospice of North Shore, 10 Elm Street, Danvers, MA 01923. 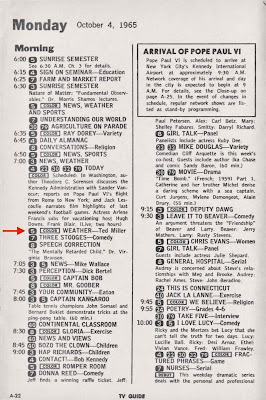 TV Guide, Boston Area
Miller was laid to rest at Linwood Cemetery. The Haverhill Public Library has a Miller archive.