Obscurity of the Day: The Diary of Snubs, Our Dog 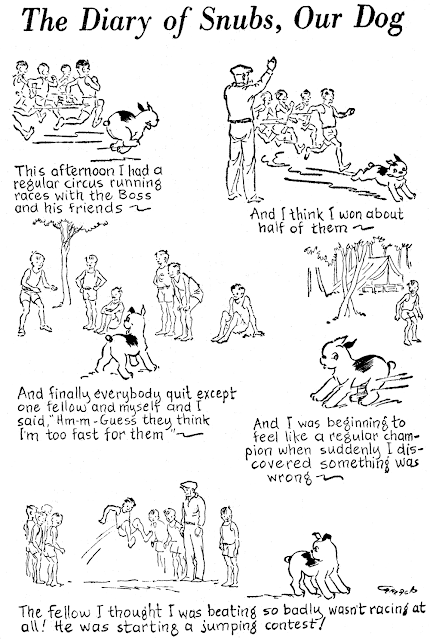 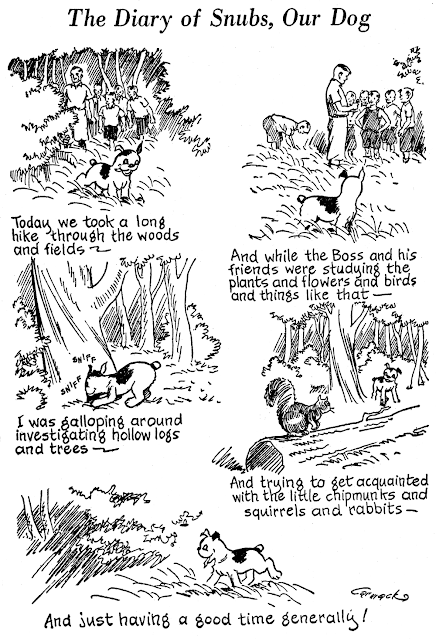 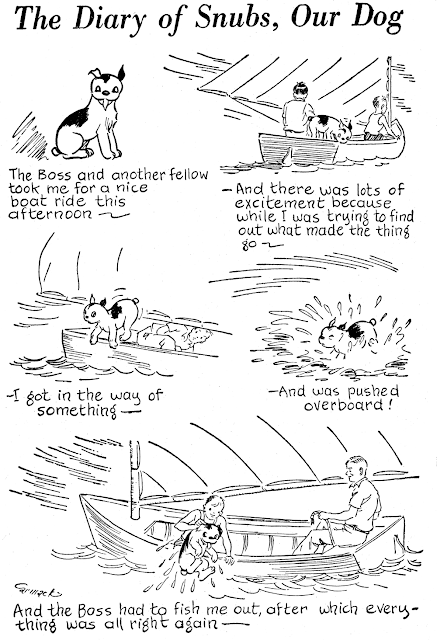 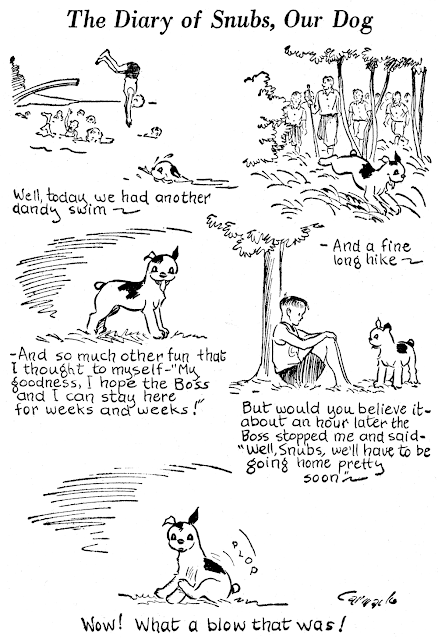 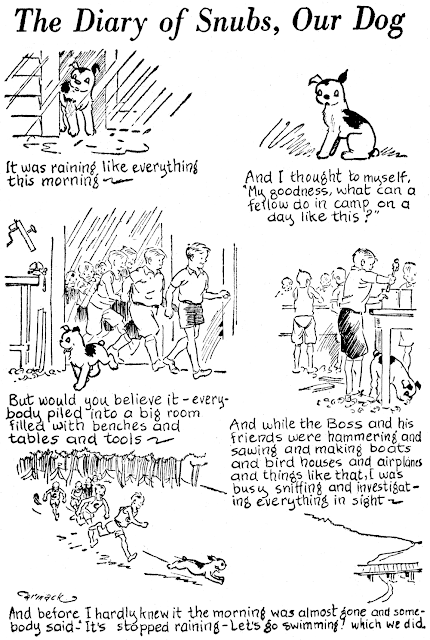 A comic strip that ran for over thirty years, was reprinted in at least five books, and was lovingly remembered by readers wouldn't seem to be much of an obscurity. However, if you weren't a reader of the Christian Science Monitor, chances are you never heard of one of their premier features, The Diary of Snubs, Our Dog.

Although the Monitor wasn't exactly a treasure house of comics content, what little they ran were, generally speaking, quite good. Despite restrictions on content (or perhaps because, one might argue) their low-key, gentle comics managed to be pleasantly heartwarming and entertaining.

The Monitor's first comic was The Busyville Bees, which ran from 1910 to 1918. After a long fallow period with no more comics, The Diary of Snubs, Our Dog was added on June 4 1923. The new feature, which ran under the title A Little Dog's Diary for the first two installments, was by Paul Carmack. Carmack supposedly created the feature for the Prairie Farmer weekly magazine before it began in the Monitor, but I have not been able to confirm that (Carmack was the cartoonist on The Adventures of Slim and Spud for that magazine).

Carmack really had his sights set on being an editorial cartoonist, but if he didn't have his heart in the strip, it certainly didn't show. The episodes, told from the perspective of the pup Snubs and featuring his youthful master, known to the dog as "The Boss", are little nostalgia-tinged anecdotes in the life of a boy and his dog that are quietly thrilling, especially for those of us who were lucky enough to have such a dog companion in our youth (mine was named Trixie). Readers marveled at how Carmack seemed to remember all those little adventures a boy and his dog had together, and skillfully interpreted the bemused mind of the dog, trying to understand what goes on in the world of the humans.

The new strip did not run on a daily basis (generally 2-3 times per week) during Carmack's tenure, and until the 1930s ran in the vertical box format shown above; eventually the feature transitioned into a typical strip format.

Carmack begged off from the Snubs strip as his editorial cartoons became more and more popular, often reprinted in mainstream papers. On March 1 1939, Richard Rodgers took over on the strip. Rodgers did an impressive job of channeling Carmack, both in art and writing. He did bring a little more continuity into the strip, telling occasional extended stories. Carmack had also engaged in continuities, but they were generally of the type seen above, where a group of strips tells of The Boss and his dog attending a summer boys' camp, not really plot-heavy tales.

Rodgers saw the pup through the war years, but was replaced by another new artist, Ted Miller, on September 16 1947. As with mainstream strips, by 1947 the Monitor's strips had been reduced in size, and Miller simplified and modernized the art a bit to go along with the new format. He also more often strayed from the diary format, in which the strip is narrated by Snubs; more often the narration was now actually dialogue, just not in word balloons.

On the last day of August 1954, the Christian Science Monitor shut down most of its strips, including The Diary of Snubs, Our Dog. Only Guernsey LePelley's Tubby and Buddy and Company and non-series gag cartoons would survive the change in editorial direction.