Richard Hellerman Rodgers was born on January 22, 1900, in Philadelphia, Pennsylvania, according to his World War II draft card and the Social Security Death Index. In the 1900 U. S. Federal Census, Rodgers was the youngest of two sons born to Isaac, a flour manufacturer, and Mary, both Pennsylvania natives. They lived in Philadelphia at 1205 Arrott Street.
The 1910 census recorded the Rodgers family in Euclid, Ohio on Windward Drive. Rodgers’ father was a bookkeeper at an insurance company.
On September 12, 1918 Rodgers signed his World War I draft card. His address was 1205 Arrott Street, in Philadelphia, and he was a student at Frankford High School. Rodgers description was stout build, medium height, with blue eyes and light colored hair.
After graduating high school, Rodgers attended Lafayette College. The Biographical Record of the Men of Lafayette, 1832–1948 (1948) said Rodgers majored in civil engineering and was in the fraternity, Delta Tau Delta. The Rainbow of Delta Tau Delta, Summer 1981, said Rodgers was in the class of 1922. The Pennsylvania World War I Veterans Service and Compensation Files, at Ancestry.com, said Rodgers was inducted on October 22, 1918 at Easton, Pennsylvania. He was a private at the Students Army Training Center of Lafayette College. He was discharged on December 10, 1918.
According to the 1920 census, Rodgers lived with his widow mother and a servant at the same Philadelphia address.
Georgetown Arts & Culture said Rodgers studied illustration under Thornton Oakley at the School of Industrial Art in Philadelphia. His landscape and figure painting instructors were Henry Snell and Emile Gruppe.
Rodgers finished his art training and moved to New York City. Everybody’s magazine featured his paintings on the covers of January and February 1928. In the 1930s he contributed drawings to Blue Book Magazine. (view November 1931 and March 1934) Rodgers’ art appeared in several books including Smuggler’s Luck: A Nantucket Story of the Revolution (1930), Dog Sled for Byrd, 1600 Miles Across Antarctic Ice (1931),  The Vengeance of Fu Chang (1932), Lone Rider (1933) and The Adventures of Tom Sawyer (Windsor Press, 1938).
The New York, New York Extracted Marriage Index, at Ancestry.com, said Rodgers and Susan Schwartz were married on April 26, 1930 in Manhattan, New York City.
The 1940 census said the couple was living in Queens, New York, in 1935, and eventually moved to Richmond Road in Berkshire, Massachusetts. The census said Rodgers was a self-employed artist who worked 44 weeks in 1939 and earned $2,360.
Rodgers signed his World War II draft card on February 15, 1942. He lived on West Street in Lenox, Massachusetts. He was described as five feet eight inches, 170 pounds, with blue eyes and blonde hair. His employer was the Christian Science Monitor. 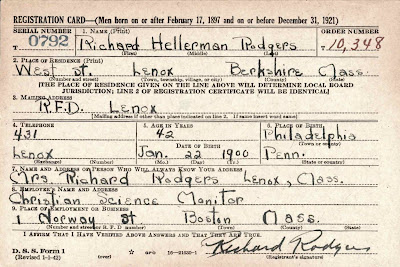 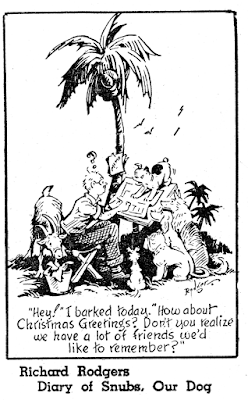 … Rodgers had several exhibitions of his oil paintings and watercolors in Berkshire County and throughout the United States.
Mr. Rodgers was a member of the First Church of Christ, Scientist, of Pompano Beach, Fla. He was also a member of the Florida Watercolor Society, the Real Estate Board and the Rotary Club of Pompano Beach.
He had made his winter home in Pompano Brach for 25 years until moving to Boca Raton three years ago.

Rodgers passed away on March 30, 1978, in Boca Raton, according to the Berkshire Eagle.
Further Reading and Viewing
Richard H. Rodgers
Mary Baker Eddy Library, Snubs the Dog in The Christian Science Monitor