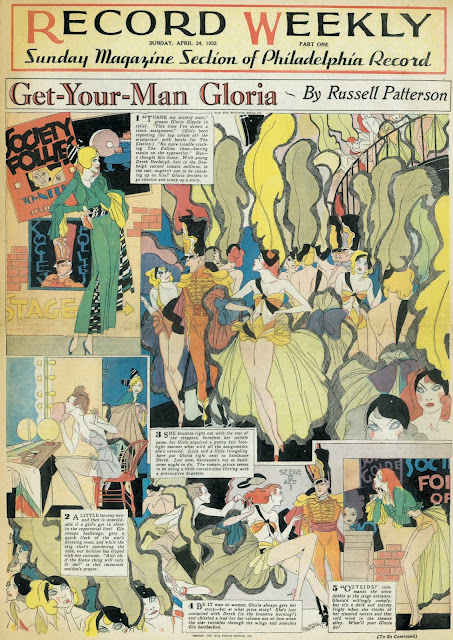 Yet another in a long string of Russell Patterson Hearst magazine cover series, Get-Your-Man Gloria ran under the King Features imprint from March 27 to May 29 1932.

This series throws a lazily-breaking curveball into the standard romance formula. Gloria Glayde is a reporter for the Clarion newspaper, and she'll do just about anything to get the dirt on high society folks, even if she has to inject herself to manufacture a headline. Her favorite target is Derek Denbeigh, heir to a ketchup fortune -- he's a hunk, he's rich, he's single and he falls for just about every trap Gloria lays for him. Poor Derek can't decide if he loves or hates Gloria for all her shenanigans, but I'll leave it to your imagination which of those emotions wins over in the end. Gloria, on the other hand, still seems to prefer playing him for the fool even come the end of the series, a bit of a surprise change to the formula.