Obscurity of the Day: It's Amazing 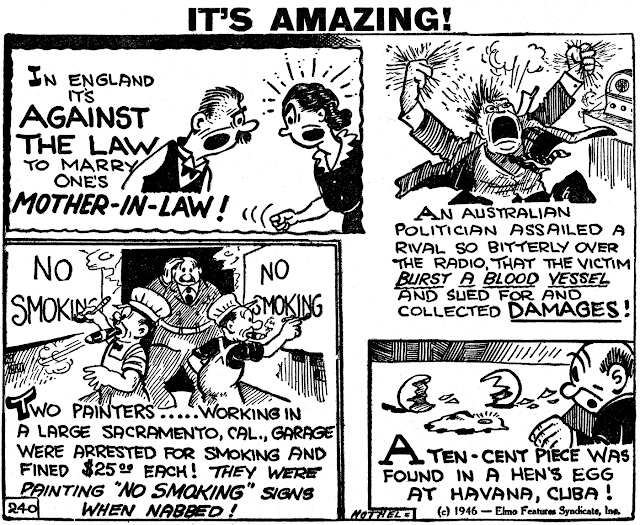 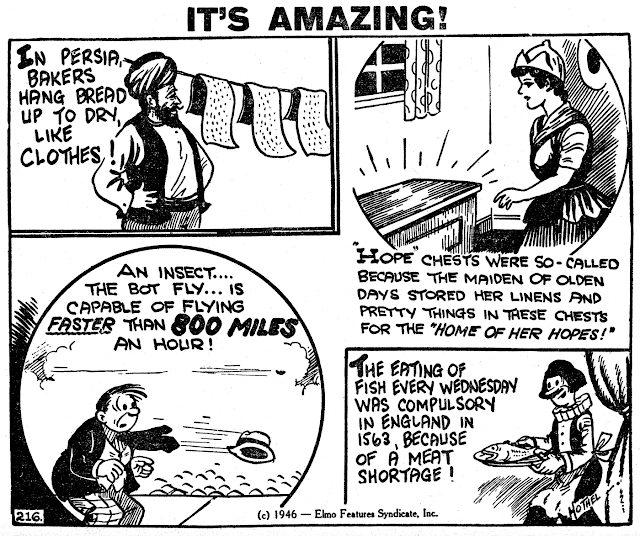 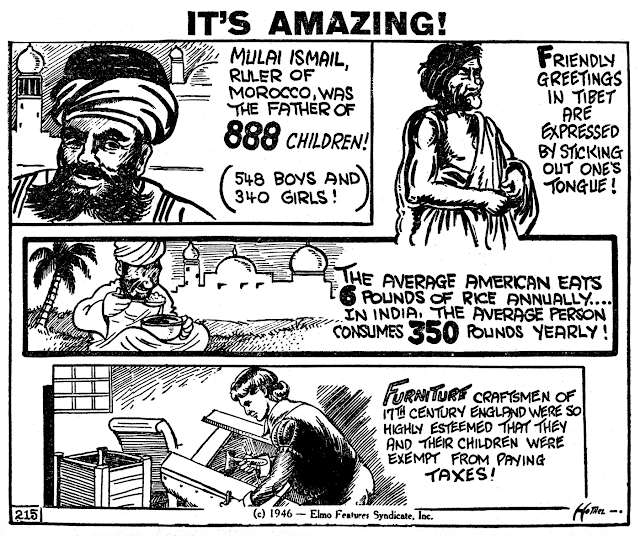 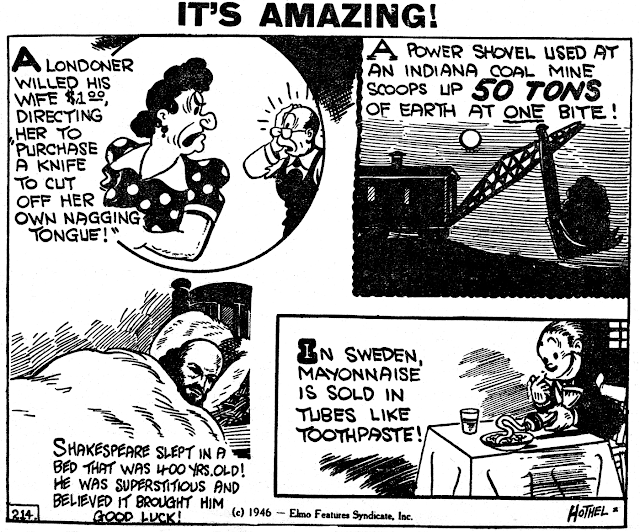 I feel pretty sheepish that H.T. Elmo's features are so rarely featured on Stripper's Guide. I'm fascinated by Mr. Elmo's dogged pursuit to scratch out a living selling weekly features to small papers, year after year, decade after decade, probably never making more than a pittance, and probably being stiffed more often than being paid..

Here is It's Amazing from Elmo's aptly named Elmo Features Syndicate. This is yet another in the long procession of Ripley wanna-bes; how surprised would I be to find that many of the items in these panels were cribbed from Ripley and his other imitators ... not much.

The earliest examples of It's Amazing I have seen are from 1942, but based on the numbering in those the start date could possibly be in 1941. As with most Elmo productions, the feature was sold in batches, though, so start and end dates are pretty academic. The highest numbered panel I've come across is #272, which would afford a client paper over five years worth of weekly It's Amazing panels if they paid for an entire run.

The entire run of It's Amazing seems to be drawn by Elmo himself, but he never actually took credit on it. Panels #1 - 176 are signed "Harmon", and then "Hothel" for the remainder of the run. I understand why Elmo didn't take direct credit on It's Amazing -- he took credit on some other Elmo Features Syndicate strips and wanted to give clients the idea that there were lots of cartoonists in the Elmo bullpen. What I can't figure out, though, is why he changed pen-name horses in the middle of the run. I also think Elmo probably reused some of his earlier 'weird facts' art from Facts You Never Knew and some other features that he produced for trade publications. He also wasn't above selling It's Amazing as comic book filler. Fox Features used some panels in their comic books in the mid- to late-1940s* under the title Facts You Wouldn't Believe.

Elmo sold this and his other features for so long that they began to look really out of place in even Podunk newspapers. The latest I've ever seen It's Amazing run is 1970, in the Cottonport Leader, but it wouldn't surprise me a bit to find later ones.

If anyone has access to Elmo Features advertising or business correspondence, anything that would shed light on his syndicate business, I'd be thrilled to see it!

* By the way, the GCD cites these as being by "Clint Harmon" -- maybe such a cartoonist exists, but I really don't think he had anything to do with It's Amazing. If anyone knows different, I invite correction.

When I first read the one about it being illegal to marry your mother-in-law, I assumed it was a joke (like the old riddle "Why is it illegal for a man to marry his widow's sister?") and wondered if all the items would be along the same lines. Since they weren't, I assume the cartoonist didn't realize the absurdity of the statement. (It doesn't say "FORMER mother-in-law.")

Hi Doug --
I was pretty skeptical of that one, thought maybe Elmo was just making stuff up. So I checked in and found that, Believe It Or Not, there really was a British law about marrying your mother-in-law (yes, even if her daughter was no longer your wife). A couple made all sorts of tabloid fodder awhile back, not just for flouting the law, but also for the off the charts ICK factor. (The husband had divorced his mother-in-law's daughter and hooked up with mom).

Although the GCD has a number of strips by Clint Harmon, they're all for Charlton and none of them appear to be related to Elmo's work. They do have one Fox filler attributed to Hothel/Elmo.