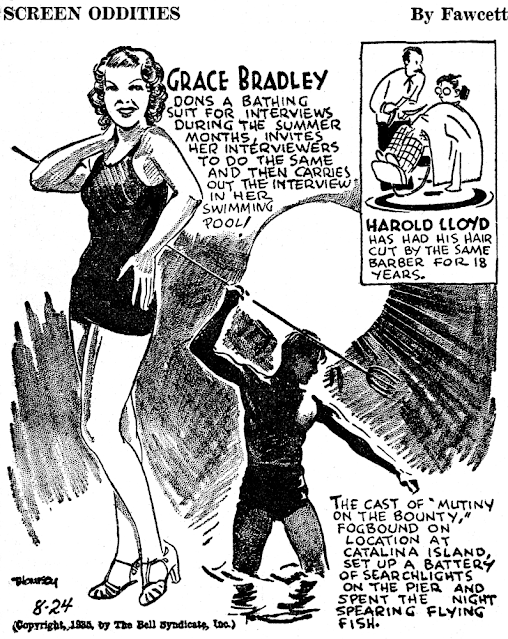 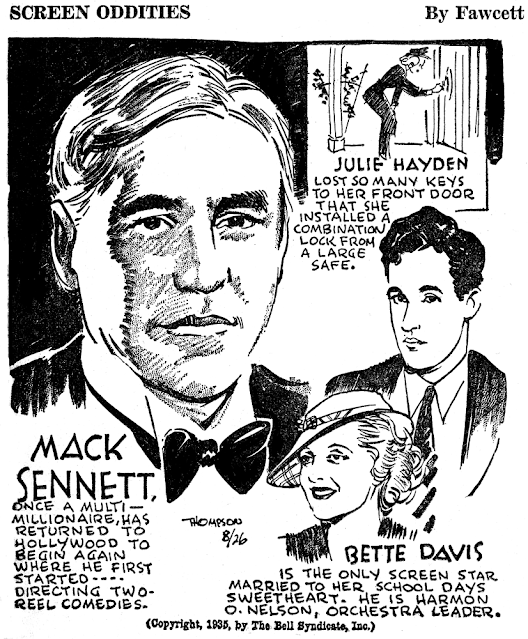 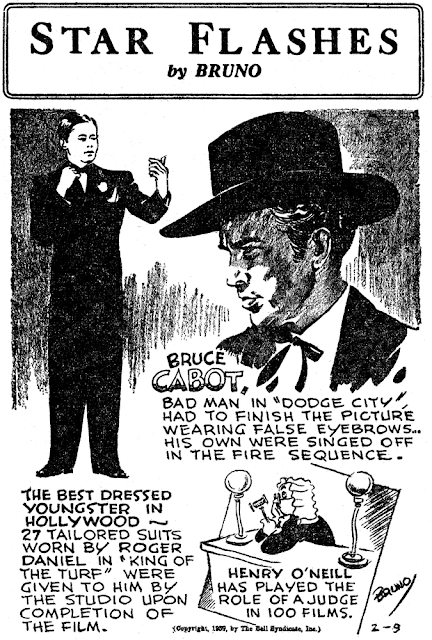 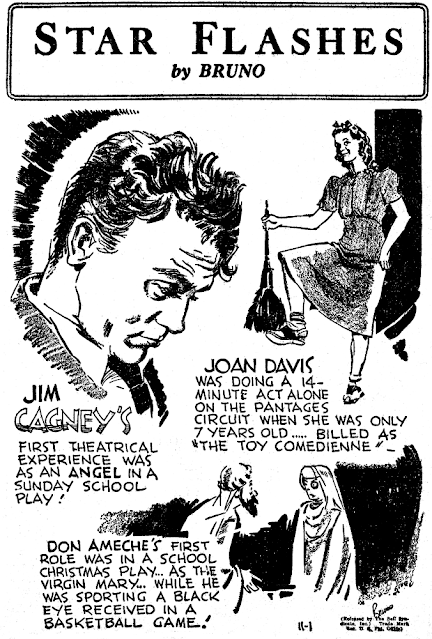 On November 2 1931*, Bell Syndicate introduced a new feature designed to appeal to starstruck newspaper readers. If you were the type interested to know that Myrna Loy had webbed feet or that Charlie Chaplin collected a 12-foot ball of his own belly-button lint, then Screen Oddities was right up your alley. It was by no means the first such feature, but it had about the same level of modest success as its main competitors, NEA's Closeup and Comedy and King's Seein' Stars, all of which were born in the 1930s.

The feature was credited to Roscoe Fawcett, son of "Captain Billy" Fawcett, the magazine publisher who turned an amateurish little jokebook digest, Captain Billy's Whiz Bang, into a magazine empire. Roscoe seems to have been mostly in charge of Fawcett Publications by the 1930s, so it seems likely that he took the credit but had the staff of one of his movie magazines find the actual factoids. In 1934, though, his brother Gordon graduated college and came into the business. He relocated to Hollywood, and seems to have been given some responsibility for the movie magazines. It's only natural then, I suppose, that the credit on Screen Oddities was eventually handed over to him, on June 14 1937**. That would last less than a year, though. On March 21 1938, the title of the feature was changed to Star Flashes and the Fawcett name was abolished for the remainder of the run. My guess is that the Fawcett family was either no longer interested in supplying material for the feature, or Bell Syndicate decided that some anonymous person in-house could just as easily comb the movie magazines for factoids. Perhaps the name change was because the Fawcetts, being smart businesspeople, had copyrighted the title themselves.

The cartoonist on the feature was not formally credited, though he was allowed to sign his art. The first few weeks of the panel are unsigned, but then the signature "Thompson" begins to appear. Much later, the artist would occasionally sign a full name, "Bruno Thompson."

"Bruno Thompson" last signed the feature on January 30 1937***, and was then replaced by "Bruno", signing with a different style signature. That might seem like no actual change, but then a short while late the signature becomes "Charles Bruno."

What are the chances that the feature was drawn by two cartoonists named Bruno, one the surname, one the given name? Chances seem small, but then they seem even smaller when the art is compared -- I see no noticeable difference between the art of "Charles Bruno" and "Bruno Thompson." But why does artist Bruno change his name? It is a mystery. However, we will learn more tomorrow in Alex Jay's Ink-Slinger Profile, in which his likely real identity is revealed.

Once the Fawcetts relinquished the writing role in the panel, "Charles Bruno" was given a byline. That's the way the feature remained until it was finally dropped by the syndicate on March 13 1943****.

Hi Mark --
The panels were printed in Famous Fuinnies, but they sure look like colorized daily panels to me.
--Allan