Obscurity of the Day: Wisdom of Wiseheimer 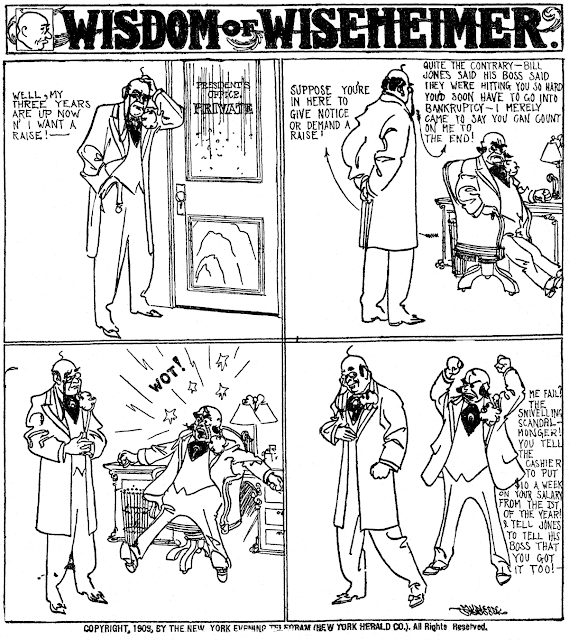 Why are the funnies so well-populated with fools, idiots and numskulls? Well, they can be funny of course, but they're also easier for the cartoonist to write. It's perfectly within a writer's intellectual capacity to write for characters that are dumber than the writer, but how does a writer create a believeable character who is smarter than they are? There's always the stock wacky scientist, I suppose, and the head-in-the-clouds intellectual, but in those cases the writer doesn't prove the characters are smart, they're just assumed to be.

Munson Paddock set himself a harder task in Wisdom of Wiseheimer, a weekday strip syndicated by the New York Evening Telegram from November 9 1907 to January 8 1909. His character, Wiseheimer, is presented with a sticky situation of some kind in each episode, and comes up with a brainy way to solve the problem each time. His favorite tool is reverse psychology, which probably didn't even exist as a term in 1907, but doesn't use it as a crutch -- Wiseheimer truly is wise, and comes up with smart and witty solutions to fit the problem.

Congratulations, then, to Munson Paddock, who was either a smart fellow who could write characters on his level, or a fellow of average intelligence who could actually write above his IQ.

Comments:
The more I see of Munson Paddock the more I appreciate his work. However...that business of having an arrow from the boss passing behind Wiseheimer to show that the boss speaks first!! It would have been so easy simply to flop the compositions to begin with, putting the boss on the left and W on the right.

Allan - I can't find a contact for you. I am writing a book about my uncle who was a famous sketch artist and cartoonist and would like to connect to get your expertise. Also, I was told by the museum in Columbus you have a post about the American Association of Cartoonists and Caricaturists which he was the president of at one point. Can you direct me to your email please? - Anita