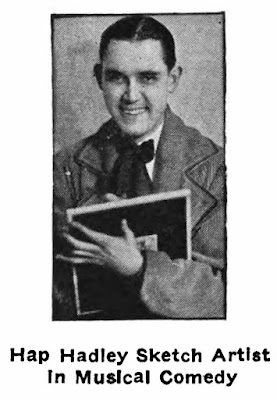 Chalk Talk and Crayon Presentation
Alvan Cordell “Hap” Hadley was born on March 16, 1895, in Findlay, Illinois, according to his World War I and II draft cards and The National Cyclopaedia of American Biography (1980) which named his parents, Albert Russell and Ada May (Hedges) Hadley.  The 1900 U.S. Federal Census recorded Hadley, his parents and two younger siblings in Findley. Hadley’s father was involved in life insurance.
In the 1910 census, the Hadley family of eight resided in Muskogee, Oklahoma, at 221 South Cherokee Street. Hadley’s father was a real estate agent.
The National Cyclopaedia said Hadley was a very young artist who took a correspondence course. He was sixteen years old when he ran away to enroll in an art school in Kalamazoo, Michigan. When Hadley returned home he got a job at an engraving company. The 1916 Muskogee city directory said Hadley was an artist at the Acme Engraving Company. When Hadley signed his World War I draft card, on June 5, 1917, he named the Acme Engraving Company, 214 Wall Street, where he was a manager. Hadley lived in Muskogee at 570 North 7th Street.
A Marine Corps Muster Roll, at Ancestry.com, said Hadley enlisted on July 28, 1917, and was stationed with Company “D”, Marine Barracks, Paris Island, South Carolina. In November he was stationed with the Marine Corps Recruiting Publicity Bureau, 117 East 24th Street in Manhattan, New York City. The National Cyclopaedia said Hadley produced special service posters for the Marine Corps. He was discharged on May 24, 1919.
American Newspaper Comics (2012) said Hadley created Marty the Marine for the New York Herald. The strip debuted November 18, 1918. On July 20, 1919 the series was retitled Marty Muggins and ended on May 16, 1920. For the New York Evening Telegram, Hadley produced Devil Dog Dave from January 1 to December 31, 1919.
According to the 1920 census, Hadley was a newspaper cartoonist who lived in Manhattan with the Lowenfeld family at 103 West 80th Street.
On April 28, 1920 Hadley married Dorothy Uttley in Manhattan. Their wedding was reported in the Fourth Estate, May 1, 1920 and Muskogee Daily Phoenix and Times-Democrat, May 9, 1920.

Romance Enacted on Gotham Stage: Proved to Be the ‘Real Thing’
Mrs. Alvan C Hadley who before her marriage was Miss Dorothy Uttley a New York actress. Mr. Hadley, who formerly lived here, is a cartoonist on The Sun and New York Herald. What was only a postlude to an audience after the performance of “What’s in a Name?” at the Lyric Theatre, New York City, April 28, was in reality a prelude to a wedding which occurred on the stage immediately after the performance.
All the beautiful scenic settings of the play, “What’s in a Nome?”, were put to practical use for the marriage of Miss Dorothy Uttley one of the members of the company and Mr. Alvin C. Hadley, a cartoonist on the staff of the Sun-Herald. The ceremony was performed by the Reverend C. N. Mollei of Trinity parish. The bride, who was one of the attendants on the Empire Bride in the musical production, wore for the ceremony the elaborate gown of the 1830 bride which she wore in the show.
Miss Uttley’s maid of honor was Miss Corone Payhtor, another of the brides of the company. She was attended by her sister Miss Constance Barnes, Miss Beatrice Milner, Miss Muriel Manners and Miss Frances Tumulty all of whom are members of the “What’s in a Name?” company. The best man was Jack Vincent, the dancer of the company. Mr. and Mrs. Hadley had intended to be married very quietly but when the news of the event leaked out the fellow players of the bride insisted upon a stage wedding. They arranged the details with genuine enthusiasm at the idea of having a real bride in the scene which had only been make-believe. Mrs. Hadley was presented with a mesh bag containing 150 in gold. The company which produced the show served a wedding supper on the stage.
Mrs. Hadley is a daughter of Mr. and Mrs. Harry Uttley, 103 West 88th street, New York. She has an uncle and aunt Mr. and Mrs. Clinton Uttley who live in Muskogee at 608 North E. street. Mr Hadley is the oldest son of Mr. and Mrs. A. R. Hadley, 627 North Seventh street and is a cartoonist with the Sun-Herald of New York. 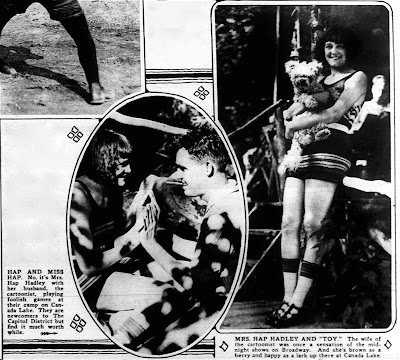 Knickerbocker Press 8/5/1923
Their marriage ended in divorce on September 19, 1930. They had two children, Alvan Cordell Jr. and Diane.
The 1930 census said commercial artist Hadley lived alone in Manhattan at 205 West 81st Street.
According to the National Cyclopaedia, in 1920, Hadley did a chalk talk as part of the Greenwich Village Follies. After a year the Follies toured the country. Hadley’s illustrations for the Greenwich Village Follies appeared in the Seattle Star, May 3, 1922; Great Falls Tribune, May 14, 1922 and May 15, 1922. Hadley was an artist for D.W. Griffith during the 1923 production of America. Hadley did the cover art for four issues of Mystery Magazine. His newspaper work included the New York Sunday American where he drew a weekly theatre art review (1924) and the New York Daily Mirror (1925). For the next five years he worked for the Capehart-Carey Advertising Agency where he did theatre advertisements for New York publications. In 1930 he opened the Hap Hadley Studio which grew into a staff of twenty and made movie advertising and theatre art. Hadley did the movie series How They Started for Film Daily.
The Connecticut Marriage Record, at Ancestry.com, said Hadley married Nina Leahman on September 10, 1936 in Greenwich. She passed away in September 1937. Hadley’s third marriage was to Margaret Keegan in 1939 in New Jersey.
The 1940 census said the couple lived in Manhattan at 230 East 48th Street. Hadley was a commercial artist who operated his own studio. His World War II draft card, signed on April 27, 1942, said his studio was at 165 West 46th Street; his home address was the same. Hadley’s description was five feet ten-and-a-half inches, 168 pounds, with brown eyes and gray hair.
The 1951 International Motion Picture Almanac had a listing for Hadley.

The National Cyclopaedia said he was a member of the Lambs, the American Motion Picture Association, and the Advertising Club.
Hadley passed away on August 4, 1976, in New York City. He was laid to rest at Holy Cross Cemetery.