Obscurity of the Day: The Cheerful Primer 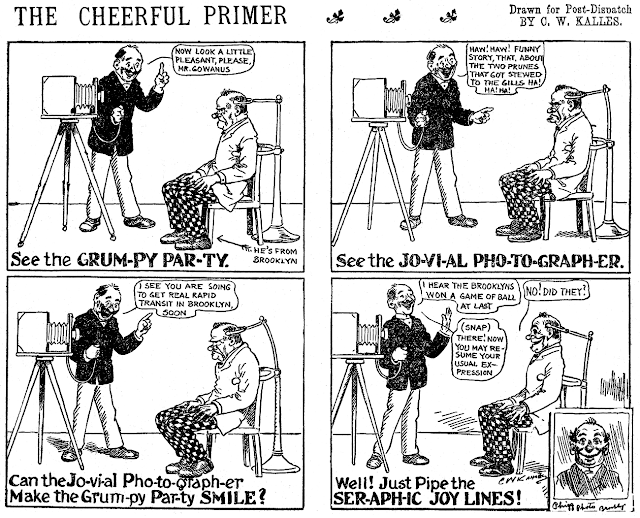 The Cheerful Primer was one of Charles Kahles' contributions to the Evening World, running pretty consistently twice a week from January 28 to July 31 1907. The idea was to satirize the form of a child's schoolbook, a concept that had been done plenty of times before. Kahles' take on the idea seemed rather perfunctory, with the gags seldom really relating or depending on the framework. Not that the gags don't work (I got a good chuckle out of the sample above) but the McGuffey's Reader thing seems to be pointless.

Here's a coupla factoids to brighten up this post about kind of a yawner of a strip. During Charles Kahles' long tenure at the New York World he was unusual in two ways. First, he seemed to be able to moonlight to other syndicates openly and freely whereas most other artists did so clandestinely. Second, he produced material for both the Sunday funnies and the weekday Evening World, which was a surprisingly unusual occurrence --- but then again, Kahles was a veritable comic-producing machine, so there's that to factor in.

Comments:
Hello Allan-
Kahles's daughter, Jessie, would proudly boast that CWK had created or worked on twenty-three series, yet I know there were more, she never considered the "weekday" strips from early on, like this one.