Obscurity of the Day: The Pixeys 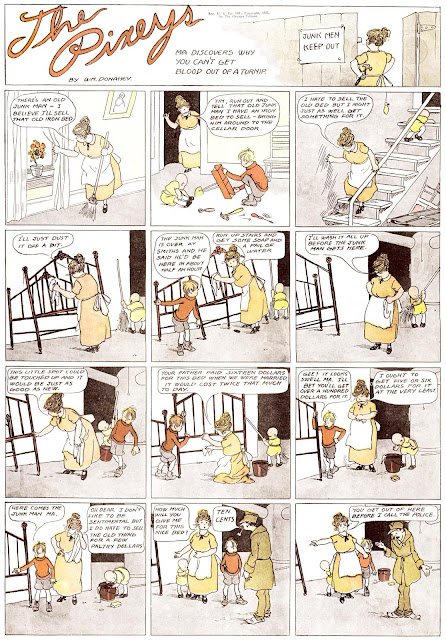 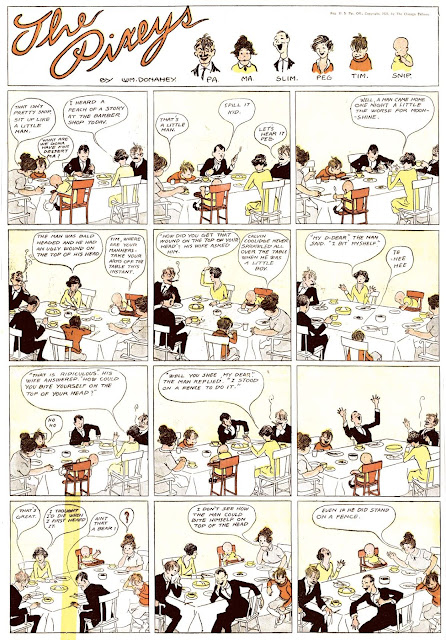 After a decade as the Chicago Tribune's resident children's storyteller, William Donahey's beloved Teenie Weenies Sunday feature was unceremoniously bumped from the Tribune's Sunday comics section. The story behind this is that the Tribune decided that Donahey's creation, which had generally run as a large panel cartoon with text story, would be better marketed in syndication as a comic strip. So the feature, which had mostly run in the magazine or women's section of the Sunday paper, was moved to the comics section and began a transformation into strip form.

Donahey intensely disliked the idea of making the Teenie Weenies into a comic strip; he thought they were lowbrow. Because he held the rights to the feature, after he had drawn it in comic strip form for awhile he put his foot down and said he'd had it. Being the copyright holder, he decided that he would concentrate on other venues for his Teenie Weenies, and would no longer produce it for the Tribune. It's departure opened up a slot in the comics section for a Sunday version of Little Orphan Annie, so silver lining there..

Surprisingly, the Chicago Tribune did not give Donahey the bum's rush after he took away this valued feature. While Donahey disappeared from the paper for a short while, he soon came back with a series of illustrated children's stories (not featuring the Teenie Weenies), and created a Sunday-only comic strip titled The Pixeys.

While the title certainly gives the impression that Donahey was going to do a feature similar to The Teenie Weenies, that's not at all what he'd come up with. The strip was about a middle-class family, and the gags were ... well I won't say grown-up, but they certainly weren't geared to Donahey's usually audience of little kids. The strip was very genteel and low-key and the art was nice enough but with little flair. The response to it was a collective yawn, but at least one reader really took exception. The May 10 1925 issue of the New York Daily News (sister paper to the Trib) printed this scathing letter from a reader:

Why bore your Sunday public by printing such namby-pamby, empty, meaningless, supposed-to-be comics as "The Pixeys" by William Donahey? It sounds as though his great-grandmother wrote the stupid story which accompanies the pictures. The "Teenie Weenies" were all right for the kiddies but, ye gods -- WHY "The Pixeys"?

Donahey pretty much disappeared from the newspapers after that, concentrating his efforts on marketing his Teenie Weenies in book form and licensing them as toys, candies and such. He also illustrated some books for other authors. He returned his Teenie Weenies to the Tribune as a comic strip for a short stint in 1933-34, then disappeared again until 1941. Finally that time the Teenie Weenies made a permanent home, now in their familiar panel and text story format, and ran there for the next thirty years.