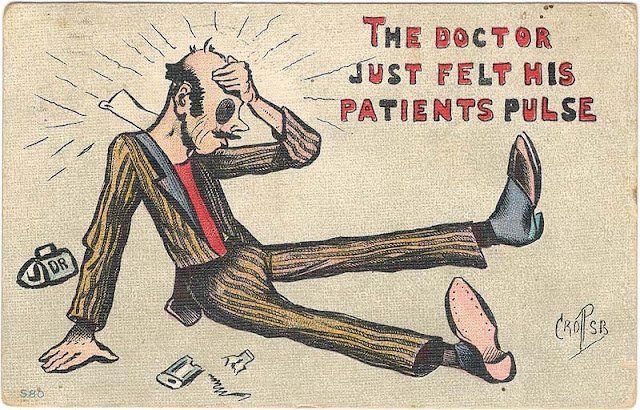 Here's another Percy Crosby postcard from the unknown maker who designated this series #580 (or is it S80?). This one was postally used in 1912, probably several years after they were produced.

To understand this gag are we to assume there's a beautiful babe who crowned him for getting fresh? Hey Percy, it'd help if you'd show that!

Comments:
Maybe not necessarily a gal hit him, the gag could be in that, as the pulse is associated with the wrist,or the hand, one has been used on the doctor's head, where he "felt" it rather violently. Reason for this outburst unspecified. Maybe a fee disagreement.
Like most of these Crosby cards, he seems to be just hating every pen stroke he puts down, carelessly flying through it without considering perspective or proportion. Look at that bag-why the 10 point brush outline on it alone? Feet don't bend that way! What is he wearing in lieu of a jacket?
I haven't had my morning coffee yet.

Obscurity of the Day: Mike -- They Love Him So 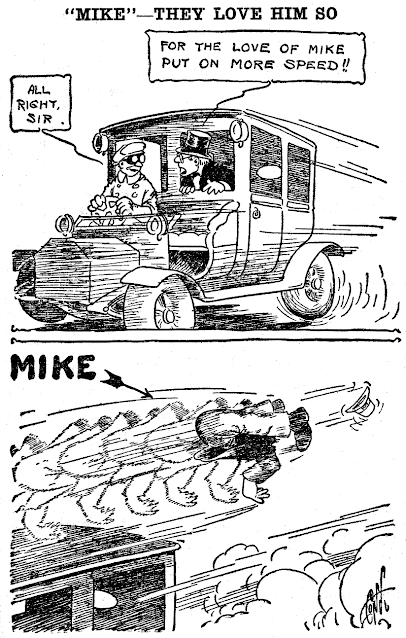 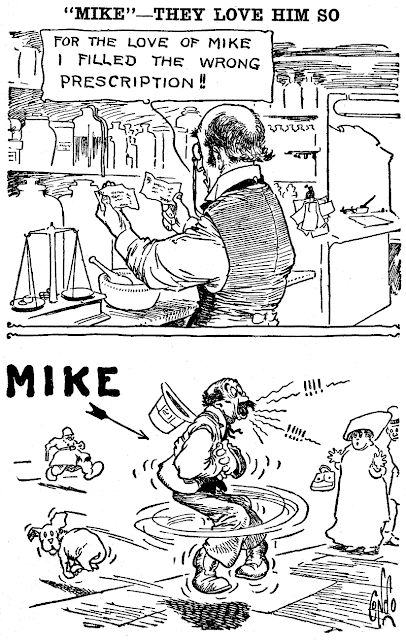 Do you know what a "minced oath" is? What a lovely picturesque term for something you can say in polite company when what you really want to say is !@#$%$#@!!!!

Some minced oaths replace a naughty word with a G rated one. Think "Darn it all!" or "I don't give a fig!" Others are designed to keep the speaker from violating Commandment #3 -- that's where we get terms like "cripes" and "jeez" so as to not actually be taking a certain someone's name in vain.

It appears some take that third Commandment so seriously they don't even like to utter the names of saints. From these goody-goodies we got the terms "for Pete's sake" and "for the love of Mike" (St. Peter and St. Michael barely disguised), and that's where today's obscurity comes in.

The phrase "For the love of Mike" can be traced back at least to the 1880s, but it took a few decades before Ardo D. Condo, one of the brightest lights in the NEA cartooning stable, took aim at this ridiculous phrase. He wondered in cartoon form what would happen if there really was a Mike to whom all these minced oath utterers were referring. While Mike -- They Love Him So is no competition for Condo's classic series Everett True and Mr. Skygack from Mars, this cartoon is great fun nonetheless, showing what sort of interesting permutations Condo could twist out of such a one-note comic idea.

Mike - They Love Him So runs in the NEA archives as an occasional weekday strip from September 8 1910 to January 5 1911, but NEA clients were notorious for running things on their own schedules, so don't be surprised if you find it in a paper a little earlier or later.

Comments:
It doesn't take a genius to realize that the correct form is "for the love of Bob!"

Obscurity of the Day: Jack the Giant Killer 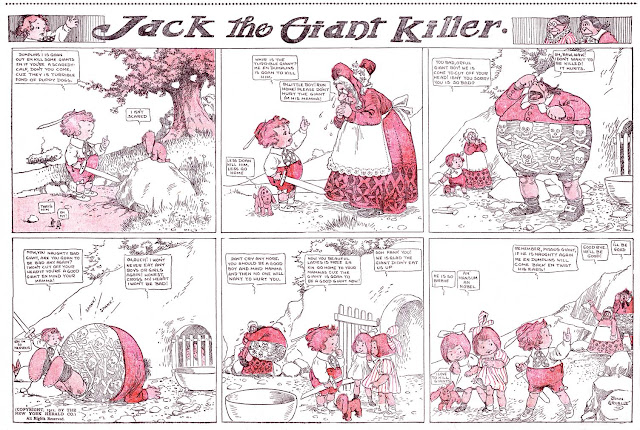 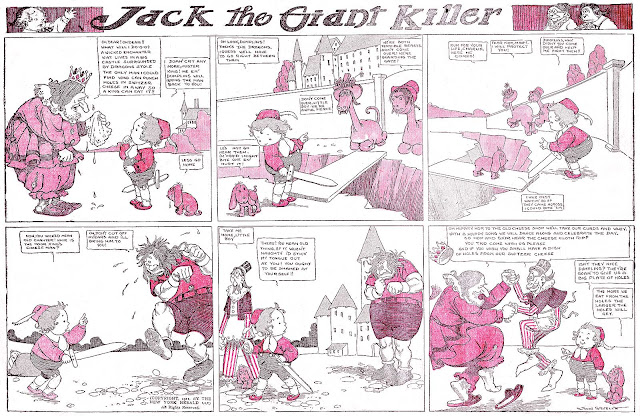 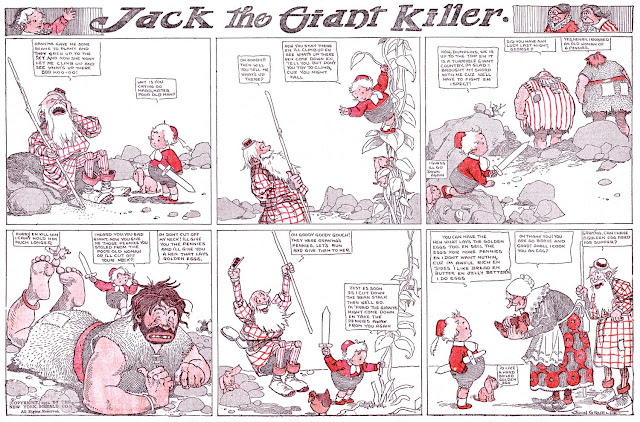 Johnny Gruelle was a very prolific newspaper cartoonist in the years before Raggedy Ann became his ticket to fame and fortune. Some of his best work was at the New York Herald, where he created the very long-running series, Mr. Tweedeedle. That series began in 1911 and ran for eight years, an extremely impressive run in those days.

Surprisingly, Gruelle did little else for the Herald in that long peiod. Only two other series are known, one of which is today's obscurity, Jack the Giant Killer. Jack is not much older than a toddler, and in his fantasy world he and his dog, Dumplins, are professional giant wranglers. The pair are able to best a giant with ease; the combat is over so quickly it is carried out between panels.

This series is so gosh-darn adorable it seems a pity that Gruelle abandoned it after a mere five episodes, from August 6 to September 3 1911. As much effort as he expended on this strip and Mr. Tweedeedle, though, perhaps he simply didn't have time to do both.

Several housekeeping notes: in my book I miscredit this strip to the New York Tribune and credit it to Charles Twelvetrees -- get out your White-Out to correct those embarrassing errors.

Second, I was perusing the Johnny Gruelle wiki entry, and if you are a Wikipedia editor, please oh please correct the ridiculous statements that Gruelle worked at the Tacoma Tribune, Toledo News-Bee, Pittsburgh Press, Spokane Press and Cleveland Press -- all the material being referenced is syndicated stuff from NEA, where Gruelle worked in much of the latter half of the 1900s. Sheesh.

Comments:
Allan, welcome back after completing the home renovations. Isn't it amazing how those type of projects quickly, and exponentially, expand?

This is my first exposure to the JTGK strip which is cute, funny and beautifully rendered. Dumplins, with his occasional droll comments, is a hoot.

FYI, your book lists Charles H. Twelvetrees as creator of the Jack the Giant Killer strip, without mention of Johnny Gruelle.
Did Mr. Twelvetrees write the strip?

You see that with a lot of Literary Digest Herblock cartoons from the mid-1930s, crediting him with all sorts of Scripps-Howard papers, when in fact he worked for NEA.

Newspapers themselves assumed that since they subscribed to a feature, they could say the cartoonist worked for them, and that would be technically true. In a chain like the Scripps-Howard Corporation,(or earlier, "The Scripps-McCrea League") the papers and the syndicate were part the same organization, as was King Features, Premier Syndicate,INS, etc.and the many papers in the chain were all part of the Hearst Corporation. So I guess the mentality was, you work for one part of the whole, you work for all parts of the whole.
As for the Literary Digest, perhaps without going any deeper than whatever paper the item was clipt from, the credit would be assigned.

Bob, I plumb forgot to mention that much bigger error. That came from Ken Barker's NY Herald index. Double oopsy.

Obscurity of the Day: Herkimer

The St. Louis Post-Dispatch ran a few locally produced cartoons, the most famous of which was (and is) The Weatherbird, a front page daily panel cartoon. Even the Sunday comics section of the P-D once had some impressive local content, Walter Quermann's lovely Hickory Hollow Folks. That wasn't the only locally produced Sunday strip, though. From November 17 1946 October 11 1953, Quermann's strip was joined by Herkimer by Amadee Wohlschlaeger.

Wohlschlaeger produced sports cartoons for the P-D, but was mainly entrusted with the mascot feature of the paper, The Weatherbird. Wohlschlaeger helmed this feature for almost fifty years (1932 - 1981). Evidently the daily panel and sports cartoons left the cartoonist with a little free time, and he came up with Herkimer, a delightful and skillfully executed pantomime strip. Herkimer was a rotund middle-aged man whose short one-tier adventures have him about half the time as the playful force behind some hijinks, and the other half as the butt of misfortune. The character reminds me of French actor Jacques Tati's Mr. Hulot, who first appeared on screen just as Herkimer was winding down.

Comments:
Hi Allan,
Thanks for running these "Herkimer" strips by Amadee. He didn't use "Wohlschlaeger' in the Post-Dispatch. He also created a feature called "St. Louis Oddities" which became "Our Own Oddities". It was sort of like a Ripley strip but with local interest. I loved his lady characters with the pointed legs when I was growing up in St. Louis, and I was in love with the Hickory Hollow Folks page, and O. Hum the Opossum, who was the star of the strip. The rotogravure color printing in the Post was beautiful, but it doesn't age as well as the more conventional four-color printing. Thanks, Mark

Oops, I forgot that Ralph Graczak created the "St. Louis Oddities" page. I have a dim memory of seeing Amadee's name on the "Our Own Oddities" page later on, however.

The P-D's Sunday section of that time was a beautiful thing to behold, the Prince Valiant page could look like an oil painting. The Philadelphia Inquirer had the "ROTOCOMICS™" from about 1949-1970. It was great seeing strips in that lush color, really bringing out the excitement and artistry of series like Flash Gordon, Steve Canyon, Juliet Jones and Little Iodine.
I can't think of any other papers that did that, it must have just been too expensive or impractical, as more and more papers had their sections printed for them elswhere.